Here on the 25th installment of “What The Crap?”, we’ll take a look at some creepy, absurd bosses on the Nintendo Entertainment System that just don’t make any sense. The NES was known for its insanely hard bosses that made you want to bite the controller and throw it at the cat (I know I sure did). Sometimes it wasn’t the challenge of fighting the boss—it was trying to understand what the crap the developers were thinking when creating the boss. 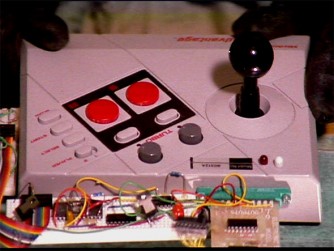 Ghostbusters is not without its flaws. In addition to excluding Winston, the game is also devoid of the humor and wackiness that’s in the film. Why is everything bland and grey? Why are all the ghosts the stereotypical “sheet” ghosts? Where is Lewis? Where is Walter Peck? Where are the Twinkies? Where’s the mass hysteria!

The only point where we start seeing some callback to the story is when you enter the “ZUUL” building, which is supposed to be Dana’s apartment building. Once you’ve mashed the A+B buttons to get to the top (and frankly, we all used the NES Advantage + Game Genie), you’re on the roof facing Gozer.  … And Vince Clortho, and Zuul, and the Stay Puft Marshmallow Man…and a bunch of random floaty ghosts? Wait, why are you fighting the terror dogs? They were the key to opening the gateway to our dimension for Gozer, but they didn’t shoot weird bubbles and beams at the Ghostbusters. And, the Marshmallow Man was the destructor form of Gozer. Don’t you remember when she forced them to choose…choose the form of the destructor? Technically, it should have been J. Edgar Hoover since that was the first thing that Peter thought of, but I digress. Mr. Stay Puft was, in essence, Gozer. It’s whatever it wants to be. Why am I fighting all these things? Why can’t I just cross the streams like in the movie? What the crap?! 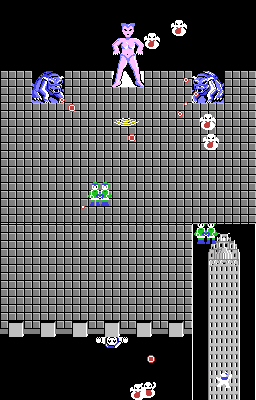 The battle takes place on two screens. They are stitched together here. 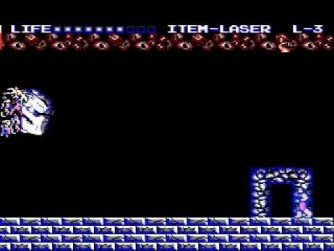 Remember in the movie when Arnold defeated the floating Predator head with a laser?

At the end of Dragon Warrior, the Dragon Lord asks the hero if he wishes to join him in ruling the world in darkness. As a young lad, I was led to the darkside, taking the quick and easy path. He sugar coats it and tells you that he can revive you in the future and retain your game progress, much like the king at the main castle. But then he tells you that you must sleep for a long time. The text turns red like when you are critically injured or dead. Did he put a spell on you? Does he kill you? Am I a thrall? What the crap?! I think at that point I rage quit, and when I came back to level up more to actually fight him, I found that my battery backup was destroyed. Thanks, Nintendo!

The dark horse of the Mario franchise, Mario 2 brought a lot of great things in to the fold, such as bob-ombs, sniffits, and the Princess’ hover mode. Virtually everything was different, especially the end boss, Wart. A strange lizard creature, Wart tries to take over Subcon and ban all vegetables in the land. He hates vegetables so much that he…keeps a vegetable machine in his private quarters. Would you keep a cyanide fountain in your bathroom? What the crap?! 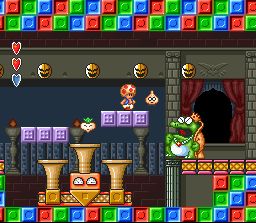 I'm sure most of the people reading this article have heard of the computer game known as The Sims. What this is a people-simulator or role-playing game  where you make families, chose their personal