Hello, dear reader! Welcome to the first installment of a new series I’ve started called “The Viewtiful View”. Watch your step, that last one is a doozy. I told the owner of this building to get that fixed. If I had cookies to offer you, I would. No one will trust me with the oven…and rightfully so. But that’s a story for another time, hmm?

In the videogaming world, often times there are aspects in which people are, or could potentially be, divided on their opinions or viewpoints. In this series, we will look at some examples of this within a certain game or gaming in general. We’ll walk through the situations and provide the stories for both sides, and hopefully shed some light on the situation, sparking some discussions along the way.

The first topic I want to bring up has already been demonstrated in a video made by YouTube user “whoisthisgit”.

The video above shows how it’s possible to get completely stuck on an island in Pokémon Platinum for the Nintendo DS. On Route 226, there is a small island that can only be accessed by using Surf. On the island, the player will find a man who wants to trade you a Magikarp for a Finneon. If you used your Finneon for Surf and no other Pokémon in your party can use any of these moves—Surf, Fly, Dig, or Teleport—you will be stuck on the island because Magikarp cannot learn Surf. This can ultimately be a game-breaking situation if the player decides to save their file after they’ve traded their Finneon for the Magikarp and are still on the island.

The situation described is difficult to just stumble upon: a number of unfortunate events and guidelines would have to be followed for the player to be truly stuck. The opportunity for it to be game-breaking during a normal playthrough of the game is slim to none, as long as the player is aware of their surroundings and the situation they could possibly get into before making any brash decisions…

…which brings us to the question of the article: If you found someone caught in this scenario, would you blame the designer for making the flaw, or blame the player for getting into the situation?

Let’s do some analysis on how this scenario could be entered, how it can be exited, and how the player could indeed be spending the rest of their adventure on a tiny island because they’re too damn lazy to swim on their own. Restating the requirements listed previously, here is what the player would have to do to find themselves stranded: 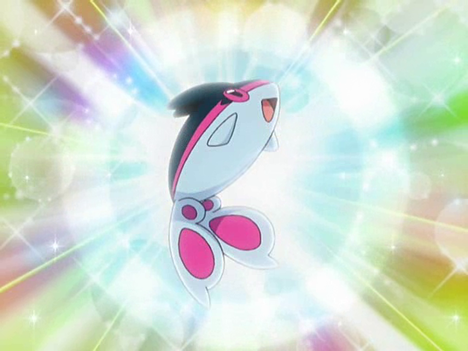 Assuming the player has met all three of these requirements, they would find themselves seemingly stuck on the island for good. Really stuck. Tom Hanks in Cast Away stuck—with no Wilson, to boot! Luckily, there are two methods to getting off of the island without cheating, and they rely on the player having at least one fishing rod on hand. The first method is to find a way to evolve the Magikarp. While Magikarp can’t learn Surf, its evolution (Gyrados) ultimately can. They would then be able to teach it Surf, also assuming that they had the HM on hand to do so. Since there’s no terrain on the island in which to find wild Pokémon, the player would have to resort to fighting Pokémon via fishing or using Rare Candies. The second method is only possible if the player has a fishing rod, because Rare Candies won’t save you from this one. If the Trainer keeps fighting Pokémon until their party has all been defeated, the player will be sent to a Pokémon Center and be free from the island. Adding this aspect to the equation, the player could still be stranded if they meet the next requirement:

Recapping for simplicity, the player would have to follow all of the requirements in the first set, and then follow it up by failing to meet the most effective requirement to get off of the island: having one of the three possible fishing rods. Steven Wright once said, “There’s a fine line between fishing and just standing on the shore like an idiot.” He couldn’t be more right: either you fish or you’re going to be that idiot. 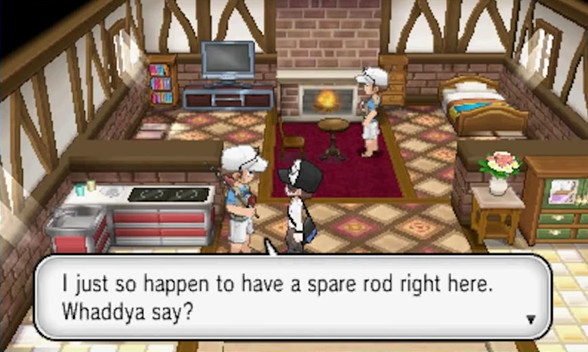 On one hand…: It is a design flaw that indeed brings up the possibility of breaking the game for the player should they be unfortunate enough to find themselves in this predicament. The fact that the player needs Surf to get to and from the island, and that Finneon is a Pokémon that can learn Surf is a variable that can spell disaster—especially if the player is not aware that Magikarp (a Water-type Pokémon) cannot actually learn Surf, being one of only three Water-types in the entire series that cannot learn it. Why have the Pokémon required to trade possibly be the only one in a Trainer’s party that could get you to that location in the first place? For example, if you had to trade a Geodude instead, then the Pokémon you used for Surf would still be in your party after the trade has been done since Geodude cannot learn Surf. It brings up the question why Finneon was programmed to be the required Pokémon to trade, or why they decided to put the Trader on an island with very limited means to reach to begin with. The player is not required to have a Fishing Rod to complete the game so it’s definitely possible to not have ever gotten one when they get to that point, or at least not have one in your inventory at that time.

On the other hand…: The player would have to meet incredibly odd requirements for the situation to be dubbed game-breaking. Requirements that would be difficult to meet while playing through the game normally and not trying to finish it by doing certain gimmicks. I’m looking at you, “Bidoof-only” challengers. The biggest requirement in question is saving their file after they’ve traded away their only means of transportation. It should be a huge red flag to the player if they stumbled upon this island while using a Finneon as their sole source of Surf and transportation in general, and were asked to trade it away after just surfing on the Pokémon ten seconds ago. Realistically, the player would almost have to work to put themselves in that situation, instead of just falling prey to the design flaw.

The designers definitely produced a broken design, but the player has also made very questionable decisions leading up to getting stuck. Who deserves most of the blame here?

Personal verdict: I would give the player most of the blame. While I do consider the design to be rather annoying and definitely something that shouldn’t have been overlooked, it’s just too unconventional for a player to truly find themselves stuck there. They would have to meet too many odd requirements if they were making logical decisions, and the biggest one would be to willingly save your file in a questionable situation. Even if you should meet the first two requirements in the first set, not saving your file would save your whole adventure. Simply shut it off and reload your game. Sure, you may have lost progress, but you wouldn’t have lost all of it. You’d save yourself hours upon hours of frustration and probably your DS since the possibility of it being chucked into a meat grinder would be significantly decreased.

What is your take on this scenario? Do the designers need to be strung upside down and used as a pinata at a child’s party? Does the player need to be tossed into some type of torture device? Let’s ring the bell and throw down.

Mortal Kombat always has been, and always will be.