You wake up in prison, with no idea how you got there, or even who you are. All you know is you were close to something, and you won’t let it pass. Through force of arms, sneakiness, a keen mind, and/or a personable demeanor you escape prison; finding yourself in a bustling underground city. “That’s right…” you think to yourself, “I’m in Fallen London, having come here from the surface in search of…” Of what you still don’t know, but there is no rest for the weary. With your prison escape behind you, you set off to get new clothes, a new place to stay, and to work up new leads once again. The ‘Neath (as the locals call it) is at your fingertips once more, and you shall do with it as you please.

Fallen London is an action-based browser game with RPG elements, a quirky story, subtle monetization, and very rewarding gameplay. Like many Facebook RPGs and browser games of the early millennium, you operate with Actions being your currency. Many of the story options take one point or more, and lead you through various tests to determine your success in that story. The metric for success is your Qualities—with the four main ones representing your personal capabilities, and others representing more abstract concepts or functions. Leveling your Qualities grants you access to new stories or quests, and even your negative Qualities can provide you an advantage in a pinch! It’s a very interesting sort of gameplay, and it keeps me coming back looking for the next new Quality I’ll find! 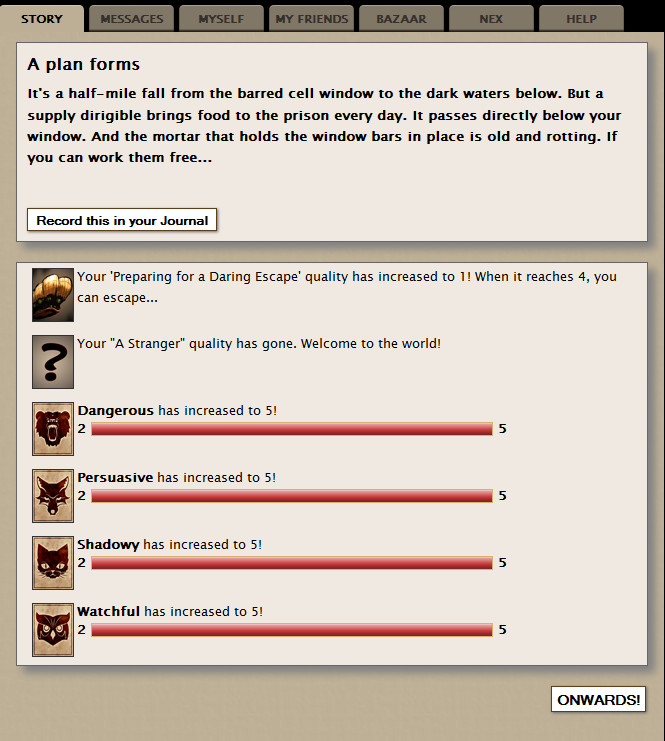 Here we see several Qualities, increasing or decreasing based on your actions.

Events based on your many Qualities pop up, and sometimes unconventional Qualities are unlocked or removed.

The game’s story focuses around your character and their ambitions in Fallen London. While technically everything is already written, you basically only pursue story elements your character finds interesting. (Or you. I guess you’re the deciding factor in the end.) In so doing, this allows you to form some unique stories for your character, and truly no two characters are the same. For example, I decided to go the route of the monster hunter, going around and killing small pests like the gang of sapient, weapon-wielding rats or the horrifying spiders that grow huge eyes for abdomens. I also took up writing articles about my experiences with dream-based entertainment, and through that have acquired an unhealthy amount of nightmares (and a few admirers). Along the way I also followed up with my mysteries benefactor—an experienced anarchist—got a new home, and found that my aunt from the surface found my new home and is crashing in the guest room, among other silliness that occurred. The story is the game’s major draw. 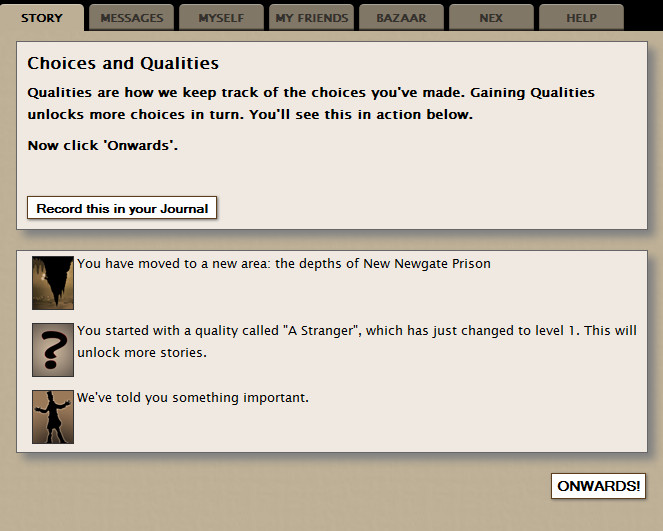 The tutorial is, as well, a part of your character’s story, and you’ll receive events based off of how much you’ve learnt of the game.

The game’s story is refreshing, quirky, and pretty unique. However, being set in an underground version of Victorian-era London, you’d think it would be rotten on inclusion. If you did think that, you have no idea how wrong you are. The game is pretty inclusive of race, implying your character is race-less, and the developers have even gone back to modify old stories that might have betrayed this aracial quality (such as an event where you die, and your ghost looks in a mirror revealing a white face. If you’re not white, this probably is pretty jarring, yanno? Hence the change). Unless I’m mistaken, the game also allows you to pursue NPC admirers of either gender, and allows you to court players regardless their gender. And speaking of gender—because oh boy does Robyn never do that—this game… Well, allow me to show you rather than tell: 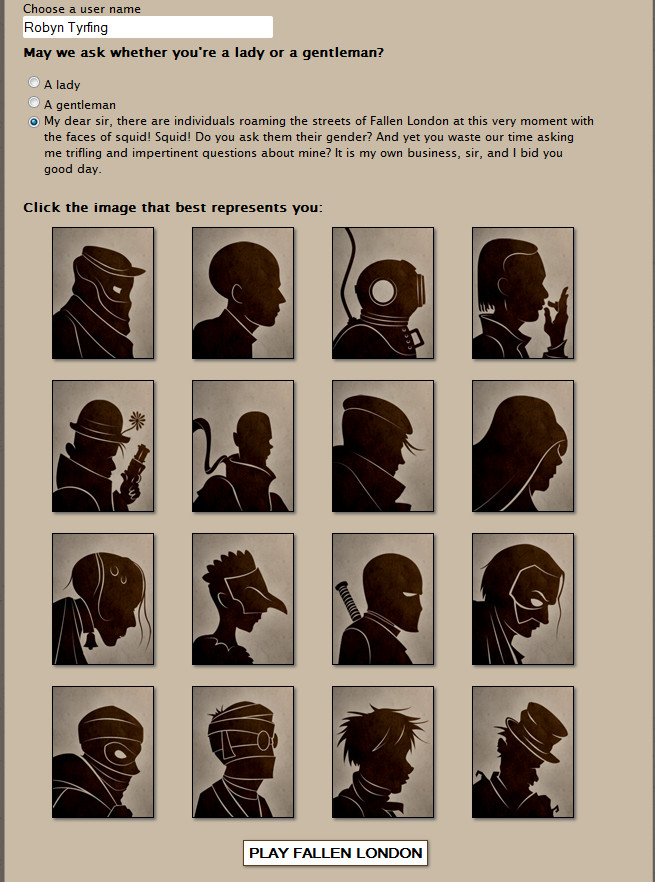 “Why, the nerve of some people!”

However, with all of these glowing recommendations, what could Robyn find wrong with the game? Quite a lot, sadly. For starters, the game takes neutrality gender as a sort of joke. People will refer to you as, “Well, whatever you are.” Which is really dehumanizing, and insulting as well. The game’s Action economy is also an issue, offering no way—save for a monthly fee—to increase your Action count. As well, many stories you’ll find require days of grinding the same story over and over again to make success, or even have a chance at succeeding them. In all, the game falls to the same faults that plague early browser games, and this should be considered before investing time into the game. 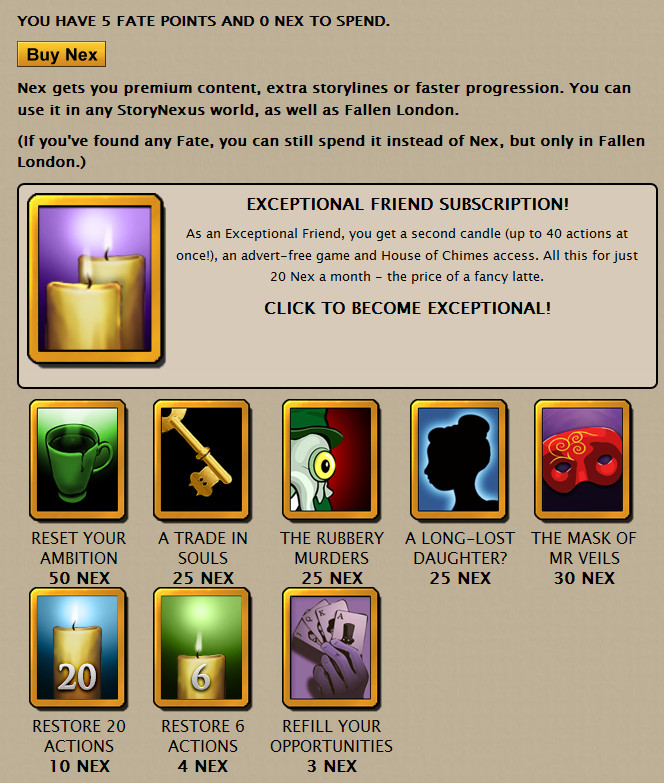 You can buy extra Actions, new stories, a new picture, or refill your “Opportunity Deck.”

In all, Fallen London is an all right game. Its story sets it out from the other browser games one may encounter, but the premium content doesn’t entirely balance out, and the inclusiveness feels double-edged and rather mocking at times. Am I still playing it? Yeah, of course. Would I recommend other people? Certainly, but go into it knowing what I’ve just told you. If any of this sounds like it’s not something you’ll enjoy, you probably shouldn’t check it out.

Imagine a world where the guy you love brings home a new woman, announces that she will be living with him for at least a week or two, and proceeds to spend every waking, non-work moment with her. He ...