If you’ve followed my recent articles about Japanese dating sims, you know that I’m struggling with the battle system in these games. That’s mainly because the battle system was invented to stop players from progressing in the game without paying money.

The battle system comes with a social aspect. That is, if I convince my Facebook friends to play the game, the battles will be slightly easier! As an added bonus, half of the people on Facebook will unfriend me, because they are sick of getting game requests.

I managed to circumvent the social gaming system by downloading the game on both my iPhone and my iPad. The two different accounts are now “game friends” with each other. That way, I don’t have to bug anyone on Facebook, and I can play two storylines at once.

Still, I hit a roadblock two-thirds of the way through My Forged Wedding: Party. The choice I have now is “pay money” or “win 100 battles”. Of course, there’s always option C, “quit playing the game”. 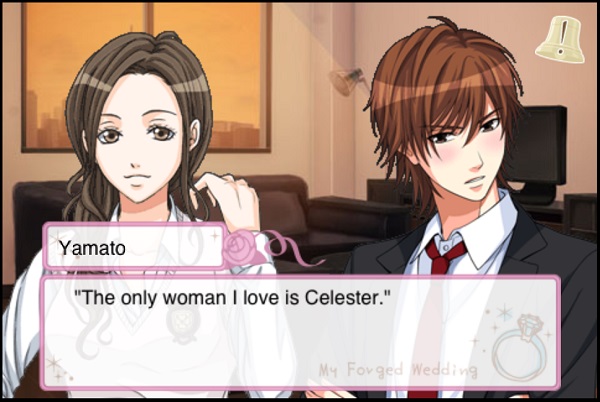 Speaking of not wanting to play the game, I felt that way 90% of the time as I went through Ren Shibasaki’s storyline. He is a ridiculously boring love interest. He’s supposed to be interesting because he’s a foreigner, but you know what? This is a Japanese game that takes place in Japan. All of the characters are foreigners!

It would also help if Ren acted like a foreigner. He looks, talks, and dresses exactly like everyone else in the game. You can’t tell he was born outside of Japan, much less what country he’s from. Ugh.

Forget Ren. The more interesting love interest is Yamato Kougami, who fulfills the “jerk who is secretly nice” cliche. He teaches at a girls’ school, and he fake marries you because the school requires all its male teachers to be married.

Yes, I know. That seems like an arbitrary rule which was invented to justify the plotline.

It turns out the “teachers must be married” rule is a good idea, because the school is home to a crazy girl named Yuri (pictured above). She is obsessed with becoming Yamato’s lover, so she hires thugs to kill you. Yamato saves you, and Yuri responds with a fake sexual harassment lawsuit. Fortunately, the lawsuit comes to a halt when you and Yuri have an exposition argument next to the investigating committee.

Yamato later reveals that he works at the crazy school because he is the principal’s illegitimate son. Since “trust your husband knows what he’s doing” is not an option in the game, you directly interfere with the situation. Yamato and his father are reconciled in a graveyard, which is not an ideal place for someone to learn they have a full-grown son.

Like I said earlier, I got stuck two-thirds of the way through the game, so I don’t know how the stories end. There is some good news, though! Later this month, the game is going to be updated. So, if I don’t get past the 100-battle roadblock by the time September rolls around, I’ll restart the game from the beginning and play with two different characters.

We'll teach you how to avoid Xbox Live's banhammer through mocking other people's misfortune.