Last time, we were talking about the localization shenanigans on Nintendo World Cup—which compared with its Japanese counterpart (Nekketsu Koukou Dodgeball-bu Soccer-hen) makes it look like an entirely different game.

I can’t talk about these games without mentioning their sequel (Kunio-kun no Nekketsu Soccer League), and at the same time, I can’t talk about this one without making reference to the previous ones. I actually intended to have them all in one single article, but then I realized it was getting way too long and preferred to talk about ’em separately.

There’s one more thing I didn’t mention last time, but there is another thing that separates Nintendo World Cup from its Japanese counterpart: the American version was built to be compatible with the (then) new NES four-player adapter. But from then on, Technos (the game publisher) embraced the idea of having four people playing simultaneously, and pretty much every game of this series supported this feature. Yes, kids—there was a time when people had to “buy” an “adapter” in order to have four players on one console.

In some sense, Kunio-kun no Nekketsu Soccer League feels like some sort of mix between Nintendo World Cup and its Japanese Counterpart; this game follows the story after Nekketsu Koukou Dodgeball-bu Soccer-hen (Kunio and his dodgeball team joined their high school soccer team), but this time around they’ll be representing Japan in an international soccer championship called the “Technos Cup”.

Don’t you just want to hold this trophy?!

Something I found rather cool in this game is that, beside Kunio, the other players in your team are actually players from your rival teams in the previous game. Beyond that, there isn’t too much to say about the plot this time around except you go out and try to win the Technos Cup for Japan!

Setting the story aside, the gameplay is where this game really shines compared to its predecessor. Back then, the actions you could perform when you had the ball were limited to either pass or shoot the ball. This time around you can jump with the ball, perform a super shot in mid-air, use evasive or defensive maneuvers, and so on.

And if you wanted to pry your opponent from the privilege of holding the ball, the game provides you with various fighting techniques in order to do so, like jumping kicks, flying tackles, and even (depending on the character) a hurricane kick pretty similar to the one performed in Double Dragon or Street Fighter. Every character in your team has their very own attributes and set of move, and learning how to play them is an experience more akin to a fighting game than a ball game. 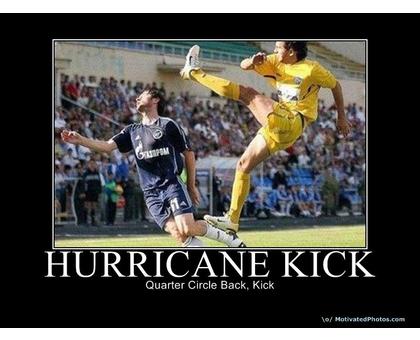 Which I’ve heard can’t be used in real soccer, sadly.

It is a trademark of the series to be able to give commands to your teammates, like passing the ball, attempting to shoot, or tackling/sliding into the opponent. But you can also go to the options menu and tweak some things to your preference. I’ve done this ever since Nintendo World Cup; I set the options to give my teammates complete agency to dribble the ball as much as they like, try to score, and also be as offensive as they like with the guy with the ball without waiting for permission. That’s the way you get to know what each character can do as they go crazy on the opponent.

Soccer League also sports some other lesser features I need to talk about. Before every match, you’re taken into a “waiting room” where you have to manage your team before and between every game. 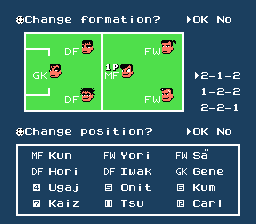 You can tell how good a player is playing a position by the look of its face. Easy stuff!

Not only do you have to set your characters’ formation and position, but also you have to talk to them and give them items in order to keep them happy and in their best mood to play. There’s certain charm to it, and it encourages you to get to know your team and try different things—but this is something that might have sounded good as an idea, but lacks execution. 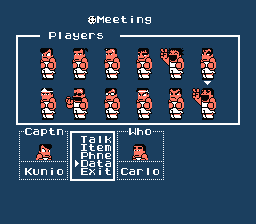 And while you’re in the waiting room, you should also check the weather forecast, since this game tends to be played in extreme weather conditions. This is easily one of the most spectacular features this game has. 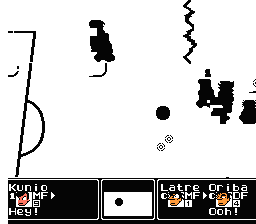 In Soccer League, it’s completely normal to play during a lightning storm, under heavy rain, or in the middle of a hurricane. This not only affects the trajectory of the ball a lot, but you also must be wary of where you’re standing since sometimes the terrain of some fields gets so wet that it becomes quicksand; or all of a sudden a whirlwind can swoop in and set anything and anyone airborne; or maybe a lighting bolt strikes the field and anyone standing on a puddle (even the ball) will receive its shocking effects.

The weather effects on this NES title are so extreme, and they demand so much on the game itself, that you’ll see the game flickering just trying to contain all the craziness going on. We can check this as a game flaw, but it is also displays a lot of commitment from the developer…they stuck to these effects no matter what, and the game wouldn’t be the same without them.

If, by any chance, the match ends up drawn by the end of the second half of the game, you’ll play a penalty shootout to determine the winner, and Technos has once again changed the way it is played. The kicker must try by any means to take the ball into the goal zone, and he can move and kick the ball as much as he wants, as long as he isn’t stopped by the goalkeeper, who also has his own set of fighting moves to counter the offense (keep in mind that they are the only ones in the game allowed to use their hands on the ball…or on you!).

Yoritsune attempting a penalty kick on England (left); the Japanese goalkeeper uppercutting the ball away from the goal zone (right).

Soccer League is packed with a lot of spectacle; I couldn’t help but wonder and laugh at everything happening on screen, from how the net tears apart when someone drives a super shot into it, to the look of the different teams and their celebrations.

From left to right: The luchador mask-wearing Mexican soccer team; the Brazilian team kicking my ass; and the Mongolian super shot transforms the ball into a little horsey…a little horsey!!!

At some point while playing Soccer League for the first time (the game itself and pictures being taken from the PentarouZero English translation); the game had me frantically yelling “why wasn’t this game localized to America?”.

Well, just recently (as I was making my investigation for this article) I realized that there is a localized remake for the Nintendo DS made in 2010 called River City Soccer Hooligans. While it looks cool, I think I prefer the classic NES version because I just can’t get used to the new 3D character models. They just look so…not River City Ransom (they now have extra big heads on tinier little bodies).

Like I said in my previous article, Nintendo World Cup is the only soccer game I’ve ever cared, but after playing Kunio-kun no Nekketsu Soccer League, I can’t look back anymore. This is a superior game, and it’s a real shame that it was never properly released on this side of the world.

This time with fewer games!