The 2014 World Cup in Brazil is finally here. Soon, the final match will have the best two soccer teams beating the hell out of each other on the field in order to score on the opposite team’s goal zone. There’ll be players lying unconsciously all over the field, and players performing amazing super shots, and—oh, wait. Actually none of those happen on the real World Cup…now I remember why I don’t usually follow soccer games.

I guess I’m not really into the World Cup, unless it is Nintendo’s. Nintendo World Cup, to be very specific, and it’s about time I talk about it since (some time ago) I (sorta) promised I’d be talking a lot more about the games based on Kunio, the main character in Downtown Nekketsu Monogatari (better known as Alex, from River City Ransom here in the west). I just started doing that a while ago, so now it’s time to move onto Nintendo World Cup—the only soccer game I’ve ever cared in my whole life.

For those who haven’t played this game before, Nintendo World Cup is pretty much your average soccer game, where you have to select one of the different teams and compete to win the Soccer World Cup. What separates this title apart from the rest is that this game was developed by Technos, and they used the characters from the aforementioned series as well as their tendency toward mild violence. So, this game allows you to tackle your rivals so hard that they fall flat on the ground, or slide directly to your opponent’s feet in blatant disregard of their safety. 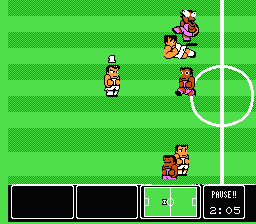 “Oh, those were your feet? I’m NOT sorry”

For those who already know the game, you know what this it’s about. It’s simple, it’s fun, it’s not perfect—maybe too simplistic—but cool enough to be remembered, right?

Good. Now that I’ve settled all that, what I really want to talk about is (as good or bad this game would be) how much garbage this game is compared to its Japanese counterpart.

The original game is called Nekketsu Koukou Dodgeball-bu Soccer-hen. If you don’t know Japanese, you might be wondering why you’re seeing the word Dodgeball in a Soccer title, and, well…that translates into Nekketsu High School Dodgeball Club: Soccer Edition. The plot of the game is that Kunio’s dodgeball team is asked to join the high school’s (Nekketsu High School) soccer team to compete against other local teams, and…here’s where things get interesting.

There’s a plot on a sports game? 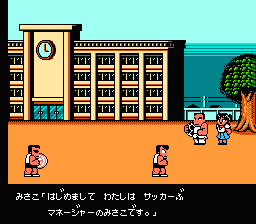 Yes, there is…complete with cutscenes and everything.

I’ll have to be complete honest; my Japanese is way too basic, so I can’t make too much of the game’s plot. I’ve been looking into this game on Internet, but there doesn’t seem to be a lot of info out there; Wikipedia says that you’re competing against other schools, but I’m seeing a lot of teams that don’t seem like schools at all, like monks, hunters, fishermen, yakuza members…? It looks more like some sort of street soccer to me. 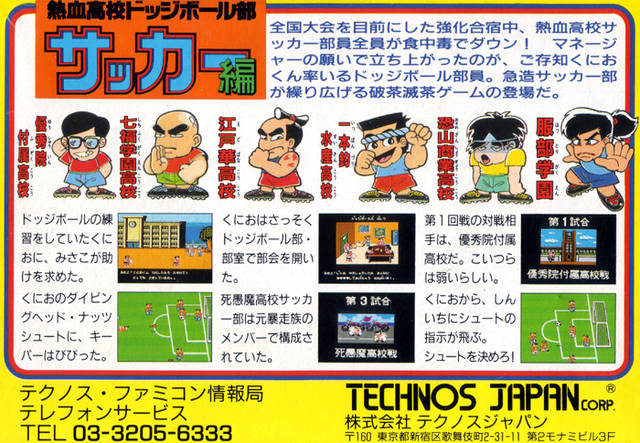 Just a sample of the colorful teams you’ll be facing in the original game.

So, what happened after the localization?

Well, obviously the whole idea of a high school team playing soccer against local radio broadcasters and ninjas (yes, freaking ninjas playing soccer!) didn’t look so appealing for Western audiences, so they took the plot out of the game and coated everything with a generic World Cup setting in order to sell it more easily to its target audience.

I think I can deal with that—why would someone want to lead some high school team, when they could be playing the national team of the country they want? That’s a little more reasonable. But, my main complaint about this is that every team looks exactly the same. The game only changes the palette colors depending on the team you’re selecting.

That just feels a little cheap to me.

This is how the USA, Japan, and Argentina teams look when you use them.

In the Japanese game, every match you have is set on a different field, depending on the team you are challenging; aside from the grassy field, there are concrete, sand, dirt, bumpy/rocky, and ice fields. This is something that was mostly removed for Nintendo World Cup, where the entire game is played on a default grassy field (which you can actually change thanks to a game bug on the game’s “VS options”).

From left to right: Monks on their dirt field; Fishermen on a sandy beach field; and the Psychics on an icy field because I don’t know.

While your team looks exactly the same no matter what you choose, your rivals do look different from each other. The new national teams inherited the stats and sometimes the appearances from the wacky teams from the original game, just the palette colors were changed when necessary. For example:

The characters on the Miners team (left) palette swapped into the Argentinian team (right).

Visuals aside, the Argentinian team actually inherited the stats of the “ninja” team I mentioned earlier, since they’re they only team in both games capable of jumping the rocks on the “bumpy” field. 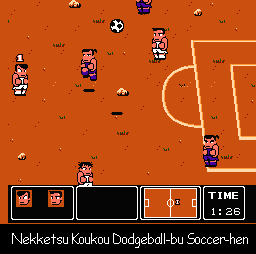 The Ninja team and their bumpy soccer field.

By the way…look who’s in Japan’s team! 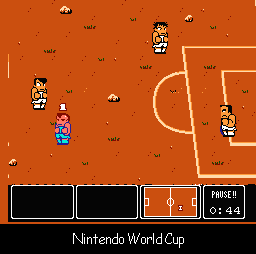 Kunio and his Dodge ball team, of course!

Now there’s another team I’d like to talk about. The Hunters team from the original game—for some reason—was turned into Mexico’s team with no changes. Just look at them:

Now, let me get this straight—I’m from México, and we Mexicans usually sport a good sense of humor, even toward this sort of thing. In my particular case, I was 12 when I saw these characters for the first time while playing with a friend from my childhood, and that moment was nothing less than hilarious.

What was so funny about our country being represented by a bunch of guys who apparently don’t know how to properly comb their hair? Well, my friend and I could swear that these characters held some resemblance with actual Mexican soccer players from those days. It was the ’90s, and the following were the top players of the era:

I think my friend actually named all six players, but I’m not really into soccer so I won’t remember the rest no matter how hard I try.

Anyway, back to the point.

Finally, the localization wouldn’t be complete without replacing the cool-looking art cover from the original with a lousy, generic, and uninteresting cover that would not set this game apart from other soccer games for the NES. 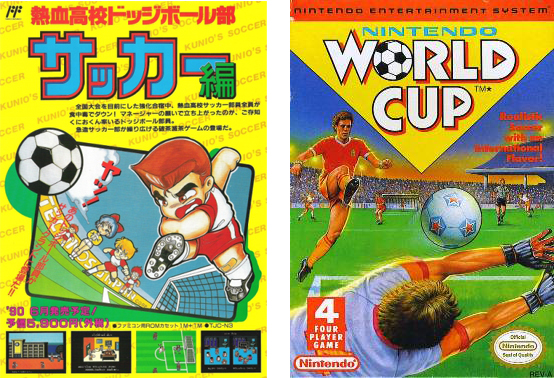 You can’t judge a book (or a game) by its cover, but back in those days we didn’t have much else to look at, so I wouldn’t have even gotten close to this game in those days if my soccer-savvy friend hadn’t invited me over to play this. Actually, my first thought was something like “you’re gonna make me play some stupid soccer game?”

Of course, this one turned not to be another stupid soccer game—in fact, it’s not your average game at all. It’s actually one of the few sport games I’ve ever cared about in my life.

Both the Japanese and American versions sport some issues; not enough to feature this game on that other column I’ve been writing lately, but just enough for me to not have the same amount of fun playing them as an adult, while still enjoying it like when I was a kid.

The best thing about this game is the sequel people outside of Japan didn’t get to play—a game I wasn’t even aware it existed until a couple years ago: Kunio-kun no Nekketsu Soccer League. A big improvement over its predecessor, which (once again, 20 years later!) put a big smile on my face after seeing their new attempt at the characters that would represent Mexico’s soccer team. 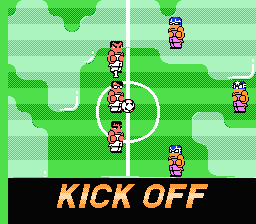 And I’ll be talking about this one…next time!

Change, as candy has noted, is good. We’ve given you new writers, we’ve given you a better layout, and now, we’re giving this: Twelve more issues a year.