When I first saw this news, I genuinely thought it was a joke. A wind-up. It isn’t.

Threshold Entertainment and The Tetris Company are going where no big ’80s gaming franchise has go—oh, wait, there was a Mario Bros. movie, wasn’t there. Who could forget?

Tetris is coming to theaters near you in 2016. I don’t even know where you’d begin, but if you can adapt Tetris into a movie, you can do just about anything. Apparently it will be a sci-fi extravaganza set in outer space; I was expecting a medieval fantasy drama.

Threshold CEO Lawrence “Larry” Kasanoff says a lot of things, and this is one of them: “We’re not giving feet to the geometric shapes.” Now any interest I had in seeing the movie has gone. Could we please acknowledge that Kasanoff’s previous work includes Foodfight!? That movie cost several million dollars to make, and is arguably one of the worst 3D animated movies of all time. It was one big product placement. 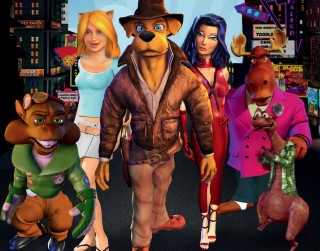 Here’s what I think: If you can pull off a Tetris movie, you could go toe-to-toe with The House of the Dead for the worst videogame movie adaptation. To his credit, Kasanoff is a decent producer; he did work on the original Mortal Kombat movie. But that game had characters and settings to develop…Tetris doesn’t.

When Kasanoff refers to Tetris as a brand, I get horrid flashbacks to Mr. Clean getting splattered with feces in the opening sequence of Foodfight!.

You know what I hate? When I'm walking down the street and a giant tomato falls from the sky and kills me. Wait, that only happens in Zool. With its pretty graphics and charming music, Zool spreads i