One night, my roommate decided she was going to play horror games on her computer. While playing Hatoful Boyfriend on my own computer, I suggested that she play The Last Door, a point-and-click horror game set in 1890 that I’d found about a year ago on the App Store. When I first found it, there had only been two parts available for me to play. I finished both within about an hour or so and could hardly wait for more. Unfortunately, the next part didn’t come to the App Store, and I ended up deleting the first two parts off of my iPad to make room for other games. When I remembered this wonderful game, I decided to try it again—this time on PC where I could play it for free online. The first four chapters of the game make up the first season, which is being sold together on Steam, for iOS, and for Android. I sprung for the $3.99 version on iPad, but you can always play for free online.

The first episode starts off in a disturbing way. A letter addressed to no one in particular is shown in parts between a point-and-click suicide. That’s right—the first thing this game makes you do is commit suicide. This character who is in the process of hanging himself after writing this fairly vague suicide note is Anthony Beechworth. He is a childhood friend of main character, Jeremiah Devitt. The letter Devitt receives is not the one that Beechworth wrote as his suicide note, but instead the phrase “videte ne quis sciat”. That was the motto of a secret science and philosophy group that the two were in charge of while they were in boarding school. Devitt believes this means something bad must have happened, so he resolves to go find out what has happened for himself. He sets off for Beechworth’s home in Sussex. 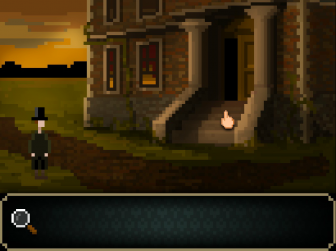 This is Devitt, he has a nice top hat that only appears now

Upon his arrival at Beechworth’s manor, Devitt finds that nobody is answering. A letter by the doorway indicates that the servants have recently left. Soon after, you find that one servant had been keeping a journal, and remarked on her master’s strange behaviors as of late. You explore more of the house, but find that some doors are locked, and that one in particular is boarded up. After you are able to get into the boarded up room, you find the corpse of a young woman named Anna (I find a character with my name and she is dead, great) as well as the words “LEAVE ME ALONE” written on the walls in blood. It turns out Anthony and Anna were married. She was very sick, and with her husband becoming more and more of a, for lack of a better word, jerk. The servants left, and now the doctor won’t even come around after an argument he had with Anna’s husband. Anna died only a few days ago, from what it seems.

When you find the crowbar that gets you into the boarded up room, you also find a record. Naturally, you should go put it in the gramophone in the living room. The sounds that come from the gramophone after doing so are terrible, so just leave and it’ll sort itself out. The record stops and Devitt goes to check out why. Behold, CROWS. CROWS HAVE ENTERED THE ROOM AND ARE STARING AT YOU. HOLY SHIT. So Devitt doesn’t exactly acknowledge this and leaves the room. Like nothing happened. AWESOME. You go out back outside, where the murder had been previously, to find a half-dead crow that the others had been feasting on and put it in your inventory. It squawks at you. At this point my roommate made a wonderful pun. “You could say that crow was…MURDERED.” Eventually you find Anthony’s body and a suicide note he had written specifically for his old friend. Almost immediately after reading the note, a crow comes and attacks Anthony’s corpse. This proves to be too much for Devitt and he promptly starts to faint. 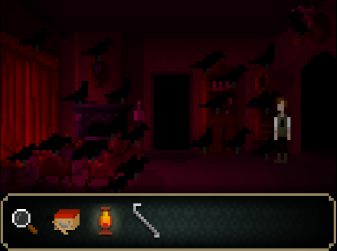 Devitt is way too chill about this

While I wasn’t sure what to expect from this game when I first played it, I ended up loving it. The puzzles weren’t all that hard (actually, they were fairly straightforward) and the story kept me interested in continuing to play that game (aside from that 12 months where I completely forgot about its existence). It was a bit short, though. I finished it in maybe thirty minutes the first time I played. I don’t think I really realized how short it was until I played it again recently. I guess since it’s only the first part of a four-part game, it makes sense that part one would be a bit shorter.

I haven’t played many horror games, but last year I got into a sort of horror kick after my friend made me watch horror movies with him throughout the month of October. This game didn’t exactly keep me in suspense, though. They tell you what has already happened, and the only extremely disturbing parts, aside from the suicide at the beginning, were finding Anna’s corpse and Anthony’s body being attacked by a crow (and maybe the part where crows come out of nowhere and stare at you…). If you’re looking for a scary game, I don’t know how scary you would find this one. It’s still a great game, though.

This first part is a good introduction to the full Season One of The Last Door games. It was simple in terms of puzzles and graphics, but the music and story were enough to make me want to continue. Yes, the music made me want more. It’s a very well done game, and it’s free online, so access to the first few parts is very simple.

I just got finished with Killzone 2, and YE GODS is that game annoying. Aside from the fact that the partner A.I. sucks and your teammates will leave you open to fire 100% of the time, the supporting