As a rule of thumb, I do not play fangames—at least, anything that tries to pass itself off as a proper sequel, prequel, interquel, or spinoff. To put it bluntly, I don’t trust that John Q. Fanboy is sufficiently attentive to detail when it comes to the tone, continuity, and core gameplay of any given series. With Space Quest, any fan dedicated enough to make a game is probably well versed enough in this relatively obscure series to at least get the “feel” right, so I’ve been willing to take a chance on the fan community’s various attempts at expanding the canon. Here’s how that’s gone so far:

Despite the varying levels of fun and professionalism in these games, they all have one crucial thing in common: It’s abundantly clear that the people who made them are tried-and-true Space Quest fans who truly tried their hardest to do the series justice. That’s what I want out of a fangame (and, for that matter, any official new installment)—it’s merely a bonus if the game is any good. Naturally, I expected the same underlying feeling of love and care from Space Quest: Incinerations, developed by a few of the same key people behind my beloved VSB, no less! The lesson here is that if you expect nothing, you’ll never be disappointed. 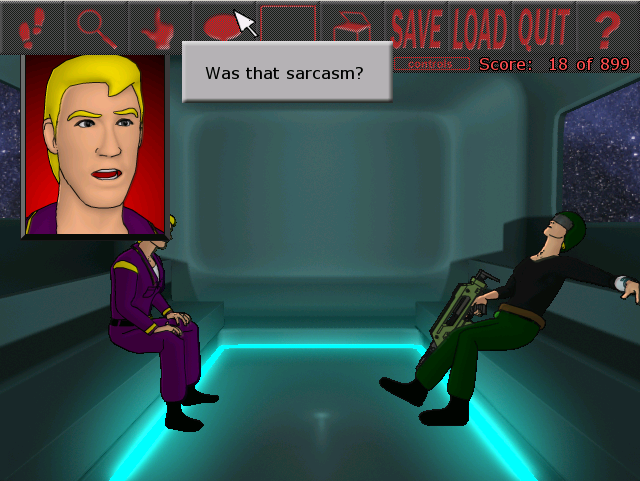 Let’s rewind for a moment to the part of VSB where our hero, Roger Wilco, is potentially guided by you to the “Renegade” ending of the game, which looks like the part of every time-travel movie where Biff Tannen accidentally kills your grandfather with a phone booth, and now the planet Vulcan is going to implode and annihilate the apes that have overrun it. Obviously, you made the wrong choice, and there will be hilarious and exciting consequences next time in Space Quest: Incinerations—mentioned by name—which is also identified on its official website as a continuation of this storyline. Unfortunately, Incinerations takes those promises of continuity with VSB and punches a hole through them like an alien chestburster. 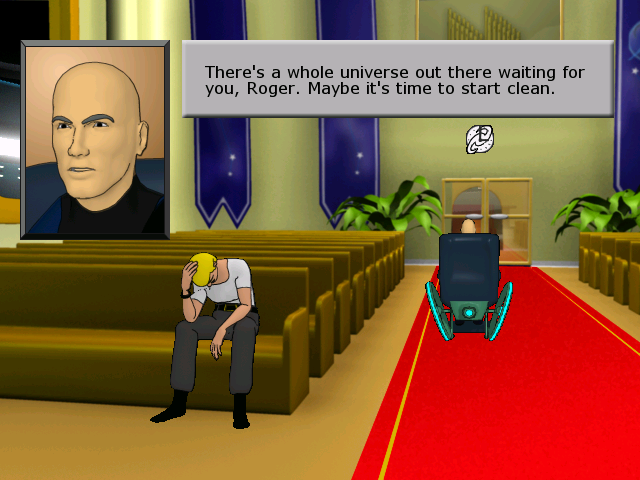 Maybe, but It’s bad form to promise a sequel and deliver a reboot.

The game picks up several years later, when Roger is a washed-up hero who is slowly drifting apart from the love of his life, Beatrice Wankmeister, because he never proposed to her after his last adventure. This is almost the only acknowledgment that VSB ever happened. Destiny demands that Roger and Beatrice stay together long enough to have a child, Roger Jr., in order for Roger to retroactively survive SQIV—time-traveling progeny, and all that. So, the obligatory adventure-gamey mayhem that ensues (finding Roger’s lost luggage, saving the galaxy from annihilation, etc.) makes the stakes that much higher: Not only is Roger fighting to win back the woman he loves, but if he fails, they’ll never reproduce and he’ll cease to exist! Never mind that Beatrice is already pregnant throughout VSB, which is the driving factor behind why they talk about getting married at all! There’s no trace in Incinerations of them having had a child, and no mention of any other reason for the glaring absence of one. Maybe Beatrice got the cholera when she was praegnant, and they don’t like to talk about it. 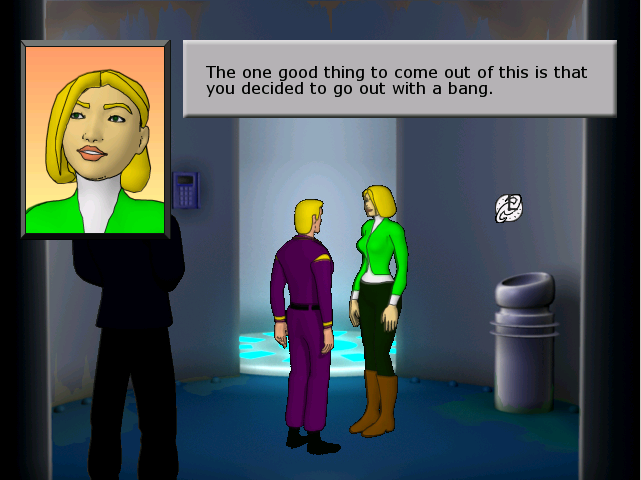 So the entire game is built on a plot hole, and frankly, I have trouble reconciling a lot of the game with established canon. Even taking into account all the time he’s spent in cryostasis over the years, Roger should really be showing signs of advancing past middle age by now. Stellar Santiago, a major character from SQ6, returns with a completely redesigned look that is never explained—and by “completely redesigned” I mean “used to be a completely different species”. The story is a convoluted tangle of self-fulfilling prophecies and dubious character motivations, and it relies heavily on misleading and concealing information from the player. I should also mention that outer space conveniently has a breathable atmosphere now, and that Roger has conveniently suffered repeated memory wipes about certain aspects of his past adventures that complicate continuity. Call them creative license and humorous plot devices if you will, but they feel like easy excuses to skirt the conventions of good sci-fi and sequel writing. 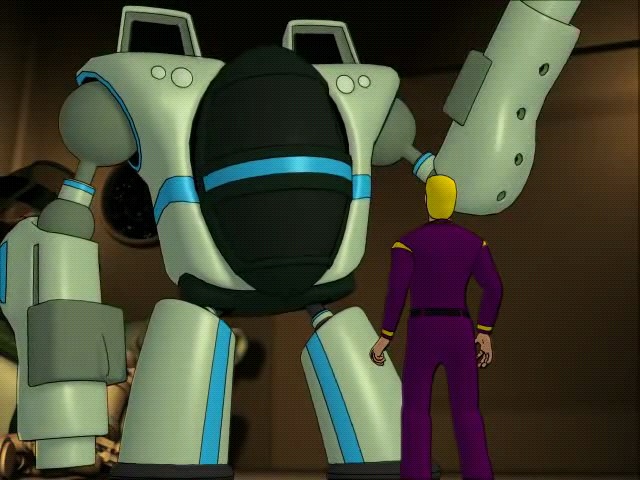 Getting to ride around in an Armech makes up for a lot, though.

The characters, at least, are well written, as is the humor. Incinerations is full to the brim with memorable side characters, absurd situations, quotable one-liners, clever references, and ridiculous comments about practically everything you click on. Roger becomes fast friends with an artificially intelligent combat mech who’s as easily amused and distracted as he is. The fish that Roger unwittingly dragged around throughout SQ6 cleverly finds its way back into his inventory, and once again refuses to go away. The robot that registers Roger for a hotel room is clearly GIR from Invader Zim. “It’s never to early in a game to steal from the homeless” is a quote that I think speaks for itself. There’s even a trophy you can unlock for licking every floor on Aries Station. (Roger is a professional janitor; don’t question his cleaning methods.) The characters and humor are every bit as witty, wacky, and warped as we’ve come to expect from Space Quest (albeit with a conspicuous number of jokes about how the developer was too lazy to program things)—still, they’re not quite enough to salvage the overall feel of the game for me. 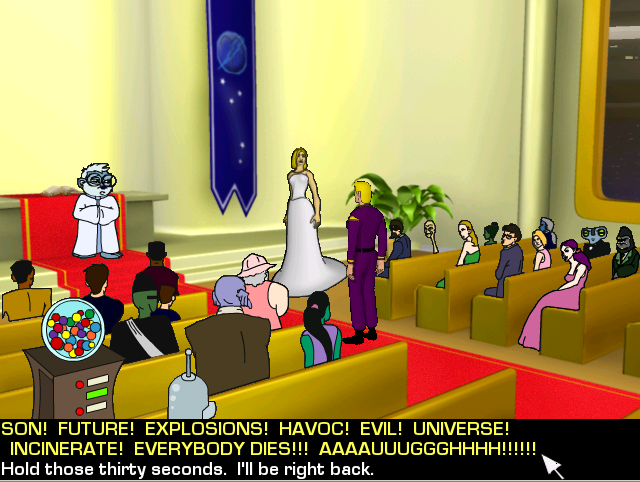 There you go. A proper plot synopsis.

Part of it is the look of the graphics, which are an unprofessional mishmash of 2D and 3D. It’s one thing to make a deliberate design choice to slam different styles together, but Incinerations looks incomplete, with the 2D graphics seemingly serving as placeholders that never got replaced. It’s jarring to sift through a mishmashy inventory screen and watch interactions between characters that visually don’t belong in the same game. The interface also looks like it’s still going through beta testing—the action icons are slightly misshapen, the icon bar uses an atypical red color that’s presumably there because it looks cool and not because it’s entirely legible, and the main menu looks like it’s merely a screenshot of a more dynamic main menu. And then there are very pretty 3D cutscenes that seamlessly transition into and out of regular gameplay. It’s like a Zelda game that combines graphical elements of Ocarina of Time and A Link to the Past, punctuating them with moments of Twilight Princess and Wand of Gamelon. Whatever the graphical style is supposed to be, it doesn’t work. 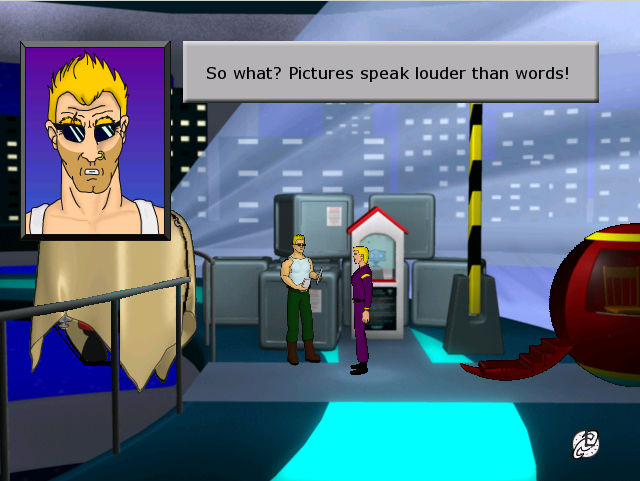 The aforementioned cutscenes are more cinematic and action-packed than anything previously seen in Space Quest, and this emphasis on cinematic storytelling is supported by a soundtrack that I can only describe as “exhaustingly epic”. Don’t get me wrong—the composition and arrangement of the music are very good. The trouble is that the game recycles a lot of its music, some of which is already recycled from VSB. There are more remixes of the heroic main Space Quest theme than necessary, and too much of the music loops way too quickly for the length of time you need to listen to it. Dramatic music frequently accompanies incongruously mundane puzzle-solving, devaluing the genuinely dramatic sections. The implementation of the music disrupts the atmosphere and undermines the quality of the soundtrack, and it’s a grating, tiring shame.

Fortunately, the gameplay and challenge progression are tight, to the point where I can almost forgive the music and story. The first puzzle of the game is to make coffee to rouse Roger from his amusingly tired stupor—this was admittedly one of the hardest puzzles for me, because I don’t drink coffee, but most other players will quickly come to understand the basic mechanics of picking up items, combining them, and using them on other objects in the room. Instant learning curve, good to the last click. Other challenges include crashing a wedding, outwitting chickens, and making herbal tea (you know—hero stuff), and there’s a superb variety in the actions required to succeed. Reflexes, timing, sequencing, and observation regularly play into the solutions, and there are hints and clues about practically everything if you’re attentive and thorough enough. Flaws aside, Incinerations is exactly the kind of adventure game I love to play. 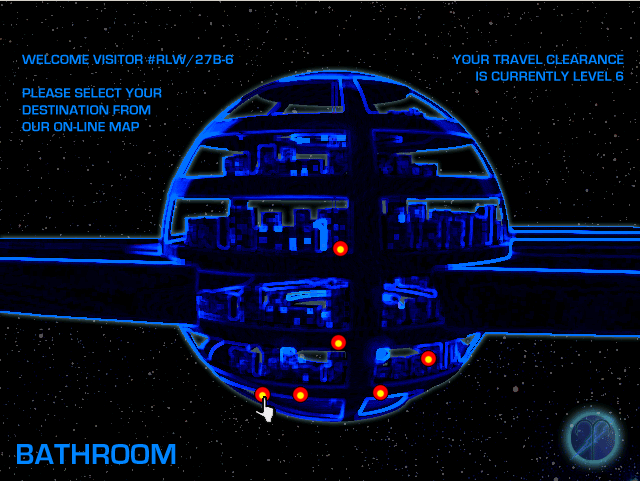 I mean, it’s got a bathroom and everything.

There’s also an optional arcade shooter section (think Time Crisis or Area 51) that provides a welcome injection of hands-on action, giving the player a much-needed taste of what it’s like to be the action hero Roger has become. The cinematic emphasis makes for a game that’s fun to watch, but the element of control that makes adventure games so engaging is diminished by overlong cutscenes that rob the player of things to do. In a game with such diverse gameplay, it’s almost frustrating to watch cool action sequences play out by themselves when you could absolutely be playing them for yourself. I found myself shouting, and I quote, “OH, COME ON!” on more than one occasion.

As elaborate as the action sequences are, the death sequences—normally a cornucopia of contorted comedy and creativity—tend to be perfunctory as often as they are fun. In many cases, Roger simply dies, and the game promptly restores you to whatever you were doing before teleporting yourself into the unbreathable part of space. (Admittedly, that’s one of the better ways to expire.) As though to compensate for this, there is a Trophy for discovering all the different ways to do away with everyone’s favorite janitor, which segues nicely into the next topic, you horrible monster. 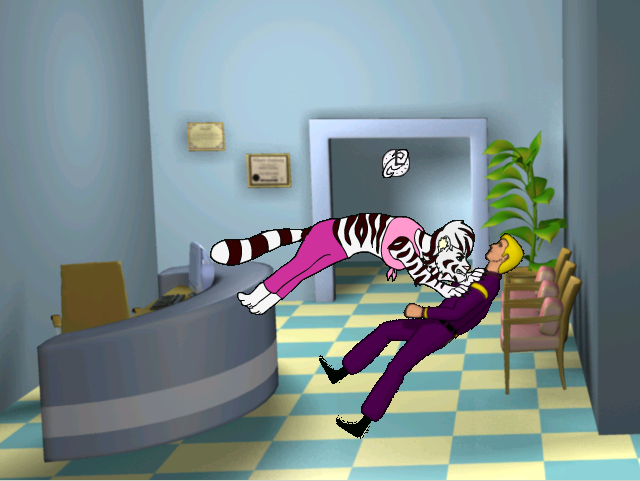 Hero of the universe, savior of the galaxy, mauled to death by a receptionist.

To its credit, Incinerations offers more replay value than the average adventure game—which is to say, you can play it more than once or twice and still see new things. There are twenty Trophies, unlocked by doing everything from shooting a vending machine to “signing a guest book” (one of the more humorously sacrilegious Achievements in gaming), plus multiple endings. Each ending is surprisingly satisfying, and I’m pleased that there’s a super-secret and super-silly best and worst ending for achieving the absolute maximum and minimum point score, respectively—the latter being a fun exercise in metagaming, trying to avoid optional points wherever possible. In fact, in an effort to pursue every ending, I accidentally ended up writing a walkthrough. 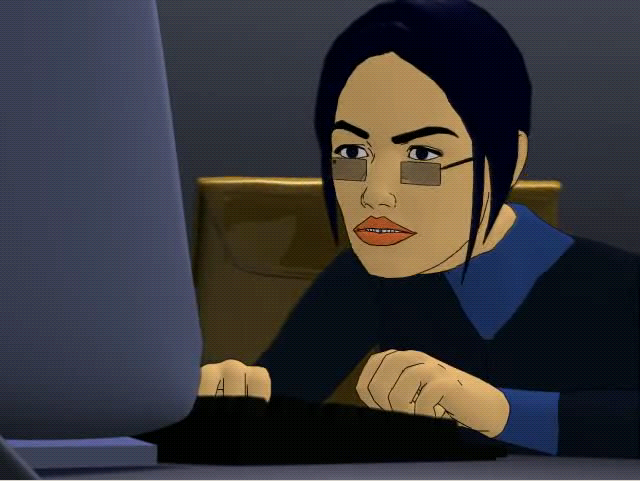 Stellar’s giving it a quick proofread.

I’ve read that Incinerations had a troubled development, ended up basically being a solo project, and was ultimately designed so that any relationship with Roger Wilco and the Space Quest name could easily be jettisoned if anyone issued a cease-and-desist. All things considered, it turned out pretty well. The fun characters, smartly crafted gameplay, high replay value, and good humor make Incinerations very enjoyable, and I can’t argue with the price (read: free to download). Still, the graphics, music implementation, and story need some serious polish; the cutscenes, while well-executed, add to the atmosphere while taking something away from the gameplay; and the connections with VSB are so threadbare and contradictory that the association hurts the game’s credibility. Incinerations falls short of my expectations for a Space Quest sequel and a finished product alike. That alone should be grounds for dismissal, yet the game’s strengths are strong enough to recommend the game, and that’s almost worse than if it were altogether terrible.

I don't know anything about romance-sim dating. There it is ladies and gentlemen. That's my return to videogame journalism after a year of being out of the game, and to top it all off, the only reason