Welcome to “The Ten Reasons,” where Michael Gray discusses ten reasons why he likes or dislikes a game. Michael formally left the staff in October of 2010, leaving his signature column up for grabs since he’s totally not writing for GameCola anymore. I’ve gotten permission from the man himself to disgrace his column, so now I finally have a chance to review one of my all-time favorite computer game series in one of the laziest ways possible.

For those of you who can’t read minds through an electronic medium, I’m talking about Space Quest, the ridiculous sci-fi adventure game series that—in terms of hilarity and clever puzzles—gives Monkey Island a run for its booty. Er, money. After a few premature and incomplete Space Quest compilations put most of the  games together in one box, the Space Quest Collection put nearly all of the series in one place, and that’s good enough for now. 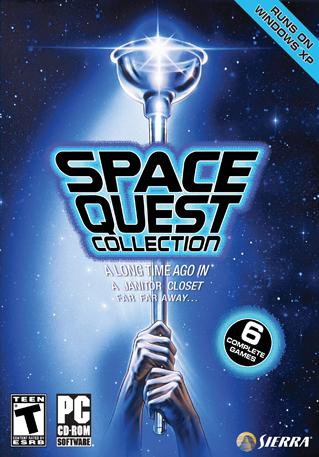 If you need a general introduction to the exploits of space janitor Roger Wilco and his patented Dumb Luck™, check out my delightful introduction to Space Quest. If you need an unnecessarily detailed analysis of each game in the series, check out my reviews of the first, second, third, fourth, fifth, and sixth Space Quest games. If you recognize that I’m doing everything in my power to make sure you’re up to speed on this tragically overlooked franchise, then you’re completely missing the part where I’m a lazy shill who’s been linking you to old material from other websites for two paragraphs.

Yes, this compilation leaves out the original EGA text parser version of SQI in favor of the point-and-click VGA remake, but let’s pretend we’ve hacked the menu to let us play that one, too. 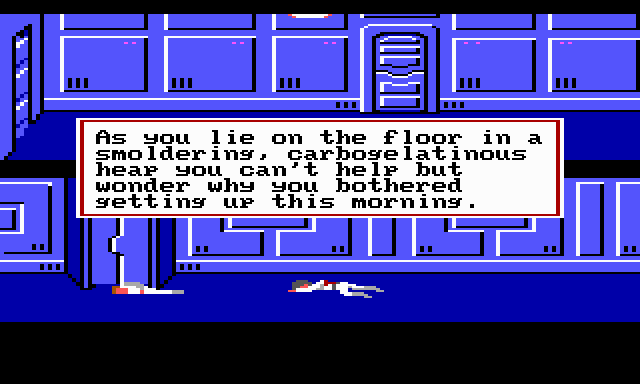 There’s a Dalek for sale at the local “Droids-B-Us,” the evil bad guy’s minions are straight out of Planet of the Apes, the protagonist of King’s Quest is getting carried away by a condor in the background, the intergalactic coordinates of the next planet are 90210, and the movie theater on the corner is playing Tango & Cash XXVII: The Sequel. 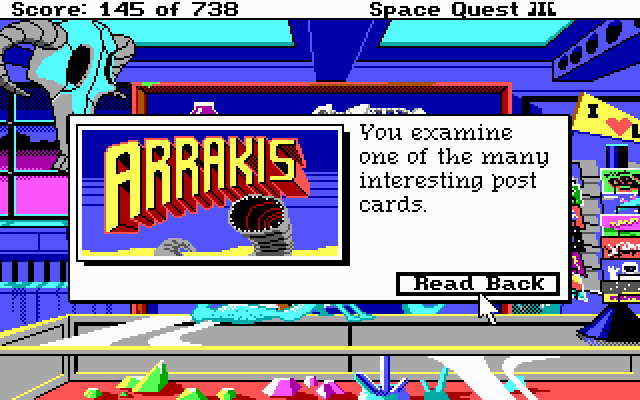 The Space Quest Collection is filled to the nacelles with spoofs, special appearances, and mentions of anything from Blade Runner to Looney Tunes. Sometimes it’s subtle, and sometimes it beats you over the head (or blows you to smithereens, or turns you inside-out), but you’re guaranteed to at least crack a smile while that Terminator knockoff is wringing you out like a wet towel.

2. Good Reasons to Try Absolutely Everything

So you’re playing a point-and-click adventure game with Talk and Taste commands, strolling through an intergalactic shopping mall—naturally, your first inclination is to talk to the food and taste the customers. Or perhaps you’re playing with a text parser interface that accepts any command in its vocabulary—how many things can you think of doing to that corpse over there? 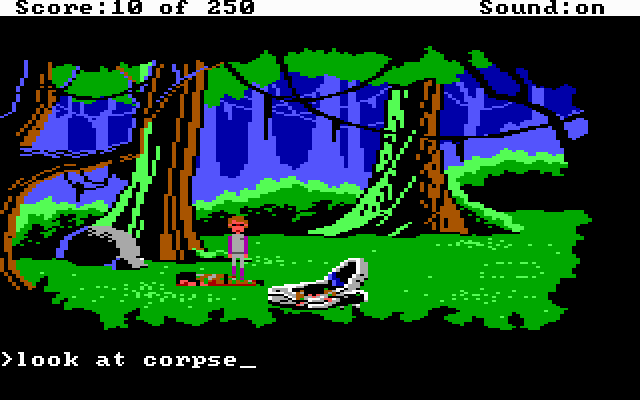 The developers anticipated that their players would be a bunch of weirdos, which is why some of the funniest and most creative parts of the series are found when you try doing things that nobody would ever do. Especially rational people. Sometimes the best rewards for ridiculous exploration come in the form of…

So you tried to Taste that pool of green acid, or you got shredded to ribbons by a Labion Terror Beast, or you made the brilliant command decision to “just wait it out” when an enemy ship was firing death at you. Well done, bozo. 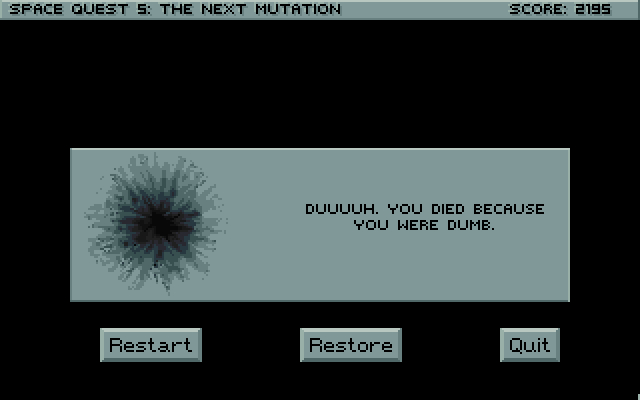 If the sight gags don’t get you, then the scathingly sarcastic commentary will. Losing is far less frustrating when you get a good laugh out of your own demise, and it’s not unusual to want to go out of your way to cause a self-destructive time paradox, beam yourself into deep space, or be devoured by a dreaded Cave Squid. Furthermore, the replay value shoots through the roof when you realize that nearly every screen contains at least one clever, sadistic method of offing poor Roger Wilco. You horrible, horrible person.

Though he only voices the narrator in SQIV and SQ6, Gary Owens—whom you may recall as the voice of the original Space Ghost, the narrator for both Rowan & Martin’s Laugh-In and Garfield & Friends, and the immortal Dirk Niblick—has left an indelible mark on the Space Quest series. While you’re looking up the word “indelible,” I’ll be thinking fondly of Owens’ deadpan and usually spot-on comedic delivery. 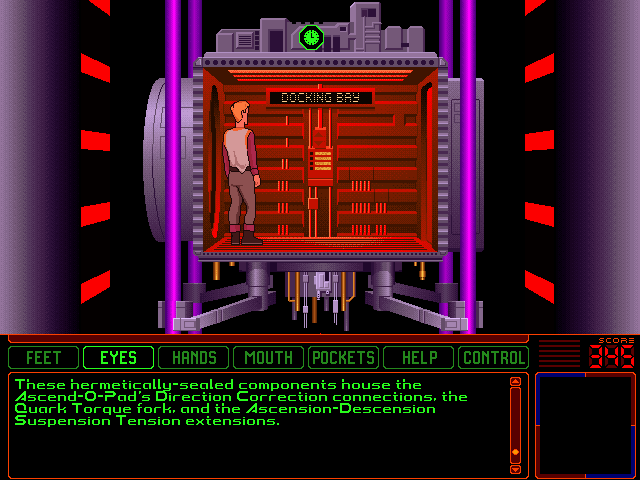 From the triumphant Space Quest theme to the fabricated digital stylings of ZZ Top, the tunes in the Space Quest Collection are eminently hummable, perfectly atmospheric, and/or mostly forgettable (nice one, SQ6). This is the music your computer’s internal speaker has always wanted to play, and MIDI has seldom sounded so good. 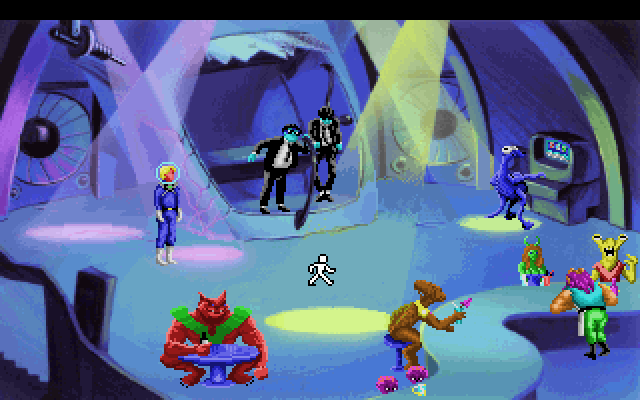 If you put your ear against the screen, you might be able to hear them. It’s worth a shot. 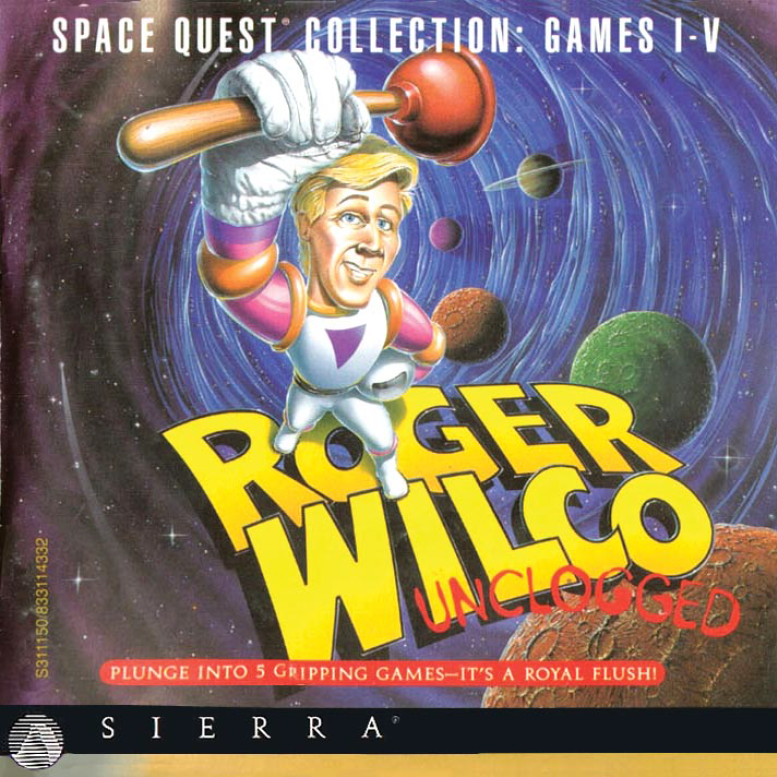 Who could forget about playing SQ6 on Halloween, when Circuit Sydney’s disembodied android head will follow you around the room? Or using the “CHEAT” command in SQII to jump straight to the end of the game, where a specially crafted congratulatory message waits with extra snark for cheaters like you? Or blindly punching in a specific code in SQIV‘s time machine and ending up on Ortega, SQIII‘s volcanic planet that’s not so friendly to meltable humanoids? 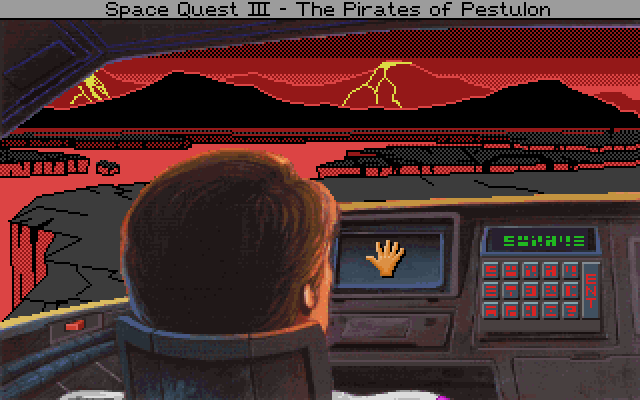 The view from the windows at GameCola HQ.

It’s secrets like these that let you know the designers really cared about maximizing the fun in their games…or else they were total slackers who goofed around all day long.

So you’ve got a vile jungle plant with deadly roots that form a twisting maze that covers most of the screen. Something interesting is probably on the other side, and you’ve got nothing better to do, so it looks like you’ll need to reduce the game speed and navigate the maze. If you’re off by so much as a few pixels, Roger will trip over a root and get absorbed and digested by the plant. Even at the slowest speed, this happens roughly every 5-10 seconds, so you must save and be ready to reload your game after every few steps. If you need a frame of reference, this is like transcribing two pages of Shakespeare, slightly tipsy, and restarting your word processing software every time you make a typo. 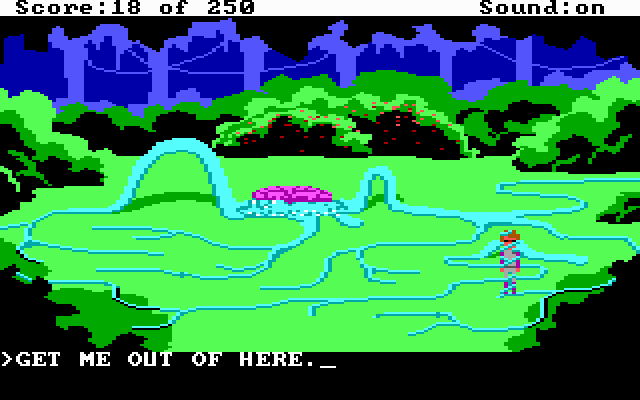 Then you need to go out the same way you came in.

So you’ve got a pocketful of Buckazoids, and you need a whole lot more to buy a spaceship and blast yourself off this desert planet and INTO ADVENTURE! The only way to gain that much coin is to win big at the slot machines. The slot machines that drain your money most of the time and actually disintegrate you for losing the rest of the time. Save. Lose. Reload. Save. Lose. Reload. Save. Win. Forget to save. Lose. Cry. Reload. Repeat. 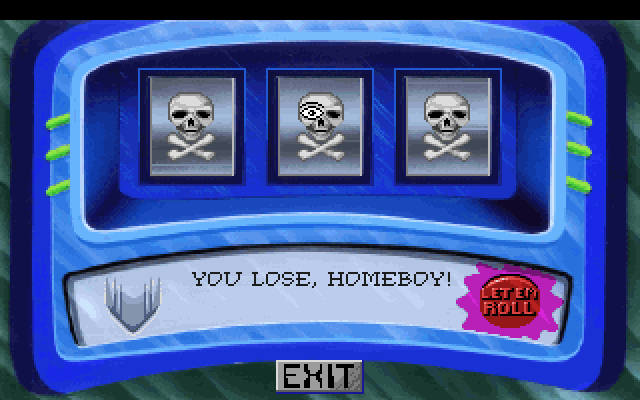 Only about a hundred bajillion more times until you’ve won! Oh, but spoiler alert, you could break the machine and win instantly if you had just picked up that five-pixel-large widget that wasn’t even a discernible part of the scenery from the fifth room of the game.

There’s a certain amount of backtracking, tedious repetition, and unforgiving realism that’s acceptable in a game. But Roger ain’t picking up Missile Expansions or bashing forest ponies until he turns into a mightier Light Warrior, and the closest thing to heavy rain is the irritatingly deadly acid falling from that cavern ceiling. Which you’ll need to navigate through TWO MORE TIMES if you have to restart the game to get that widget. And that’s three times too many.

I suppose it’s payback for being such a terrible person that I can laugh at Roger Wilco when I stick unstable explosives in his pants and make him go jumping into methane-filled sewers, but a few of the death sequences in these games have scarred me for life. I don’t watch enough horror movies or play enough terrifying videogames to give me that much nightmare fodder, but all the Alien and Predator movies and the entire Half-Life series combined haven’t caused me to lose as much sleep as Space Quest. 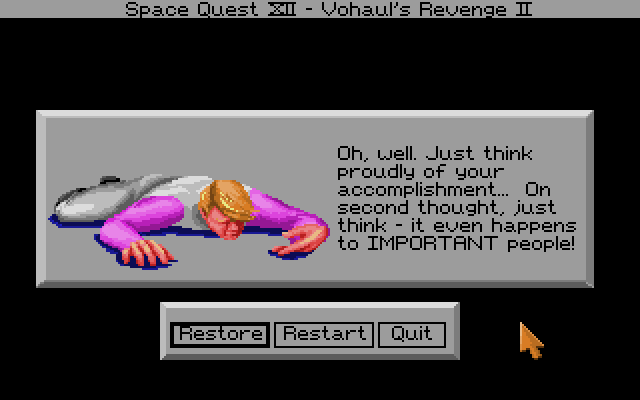 Perhaps it’s the sudden appearance of gore in an otherwise family-friendly game. Perhaps my total control over Roger Wilco equates in my head to an immersive experience where I am Roger. Perhaps I was surprised by a Toxic-Avengery mutant in an abandoned greenhouse at a young age and wound up dead before I had any idea how to react. Even when some of the deaths are supposed to be the gross kind of funny, I find myself tensing up if there’s a chance I’ll trigger one. 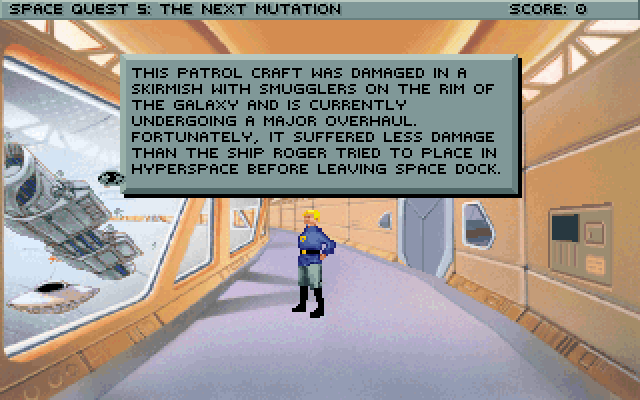 This was supposed to be a screenshot of a traumatizing death, but I chickened out in the first three minutes.

It’s not fair. Space Quest is one of my all-time favorite videogame series, but there’s something about some of the death sequences that makes me reluctant to replay any of the games. Yet, my incessant drive to try everything, just to do it all again when sharing these games with others, has permanently imprinted these terrible things on my brain. Thanks to Space Quest, I have an ongoing phobia of mutants, greenhouses, slime, “hocking a loogie,” cyborg zombies, my computer’s internal speaker, glass display cases, slow-dripping liquids, the word “puke,” and the color green.

SQI establishes the universe, SQII introduces some key plot elements to the series, SQIII picks up where its predecessor left off, SQIV starts to tie everything together, and SQV wraps it all up. Each of these five games is a self-contained adventure that leaves room for a sequel, but never requires a sequel. Then SQ6 happens, and the ending makes it very clear that the designers were hoping for a sequel so they could figure out where they were going with the plot. 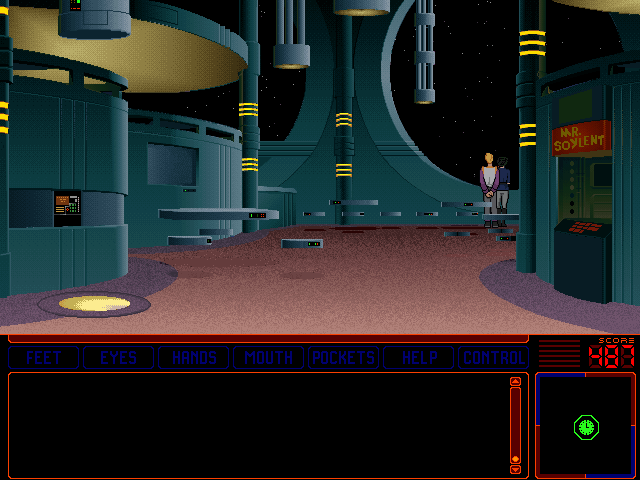 This virtually empty room is a metaphor describing my feelings about the ending of Space Quest 6.

Let me say this first: I’m happy for the opportunity to play just one more Space Quest game, and I like a lot of what SQ6 has to offer. But when Space Quest VII was given the axe—and when corporate bigwigs put the kibosh on a fan-developed SQVII that was nearing completion—Space Quest 6 became the series finale, capping off with an inconsistently fun gameplay experience (thanks to the game’s troubled development) and leaving bigger unanswered questions than any game before it. Such as, how on Xenon did I just effectively review six different full-length games in less than half the number of words it took me to review the tiny download that was Mega Man 10?

Oh, well. No time to ponder such things. You and I both have other things to do, I’m sure. 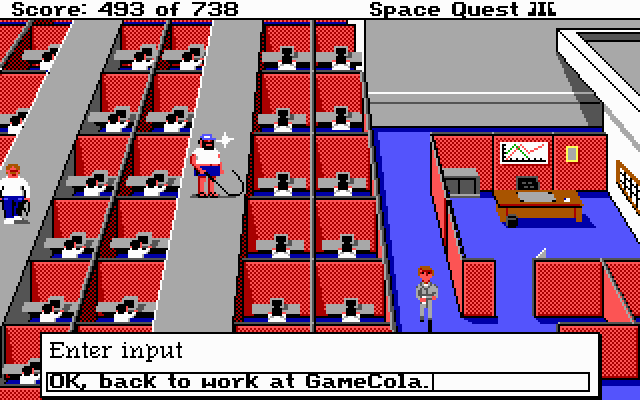 It's a different type of console, but a move away from motion controls.