Once upon a time there were four demigods who lived peacefully…until one day someone discovered a secret item hidden away in a far-off land, through the Portal of Power, beyond the Plains of Peril, and into the Valley of Fire. This item was the Crown of Command, and it possessed the power to kill anyone—even immortal demigods. The four demigods, having heard of this, felt fear for the first time and rushed to the Crown of Command. What sounded straightforward turned into a series of adventures that took years to complete, though eventually one would end up with the Crown and be the last hero standing. Perhaps this hero would be you? 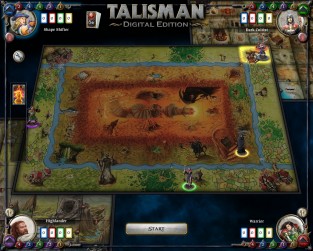 The board with its many expansion.

Talisman is a competitive PC board game intended for two to four players. You take on the role of one of four demigods that are seeking the Crown of Command to ensure that no other demigod gets hold of it. The game plays like an RPG in the sense that your character travels around the board interacting with spaces which may send them off to fight monsters, perform quests, interact with strange places, or meet stranger people. Characters who die to normal monsters and other players come back with nothing, and must traverse the three regions of the game to accomplish this. It’s an interesting and challenging board game, great for competing against your friends without the risk of somebody throwing their pieces everywhere when they lose. 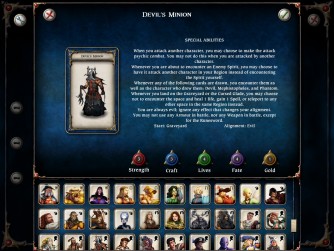 Characters are found in every expansion, and often change how the game plays.

Talisman has a hidden depth within its simplistic RPG-style gameplay, making this board game rewarding to play. You’ve got two attack stats for physical and magical, your health, your rerolls, and your gold. While simple, this gets rather deep when you factor in the various item cards, spell cards, character abilities, and even the spaces you land on and monsters you fight. What starts as a simple numbers game ends in aggressive tactical choices made based off what you have, what you know your enemy has, and what you think they may have. All that changes once someone reaches the Crown of Command, and everyone must try and out them from the coveted seat or else be eliminated from the game. With the many expansions added, you find your tactical options changing and expanding with new characters and cards to change the flow of the game entirely. 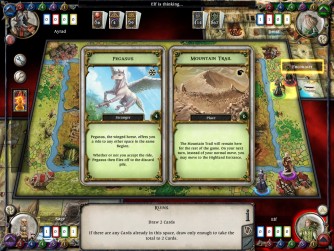 Encounters change what happens when you land on tiles.

The game’s artwork is rather impressive, too! I’ll admit that the soundtrack is rather minimal, and the writing is nonexistent, to be fair. Mostly there’s just sounds that play when good or bad things happen, when combat starts, or you roll the dice. It isn’t very impressive, and you may want to play music while going through a long game. The writing is a simple scenario which reads very similarly to the premise of Highlander, even with the expansions added on. However, the art is nice with impressive card graphics, detailed character “miniatures”, and even well-drawn tiles for the board itself. The visuals of the game evokes a detailed fantasy world, and as it progresses tells the story of the struggle between four demigods. 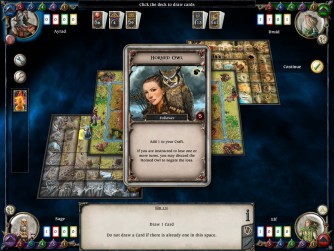 Followers are one of several ways to augment your abilities.

Talisman does feature a few faults, though! It’s mostly  in the form of the AI—big surprise there! The AI makes some notoriously bad decisions sometimes, having trouble weighing opportunity cost and risk/reward into their choices. Earlier builds of the game also had AI exploiting dice rolls to achieve infinite healing while the player sits on the Crown of Command, and while that’s been fixed, it does lead into another downside. Talisman does store dice rolls and which cards come next in the deck in advance and the AI will often make decisions based off of knowing what comes next. The AI also takes a while to make their turns, even at the fastest setting, and this makes games drag out. The previously mentioned sound and writing also stand out, but the AI flaws make for a more interesting read! These flaws are slight blemishes, especially since the game’s about playing with friends and not against the AI. 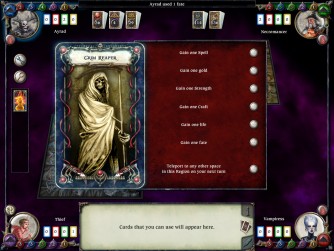 The cosmic force of Death will give you nice things if you beat them at dice.

However, blemish that’s not quite as slight is the representation issues found within the game. A big thing I found is that most of the female characters are depicted in sexualized clothing even if they’re supposed to be skilled warriors, wise prophets, or powerful wizards. All characters are white unless they’re monsters or have some weird “otherworldly” skin tone. There’s a character that’s based off the Jinn of Islamic and pre-Islamic Arabic lore, and even that character’s depicted with a white skin tone! Similarly, one character based off the Romani people is named using an ethnoracial slur for them! That’s culturally insensitive, and definitely not OK! Representation is a huge issue in Talisman, and that can make or break your experience. 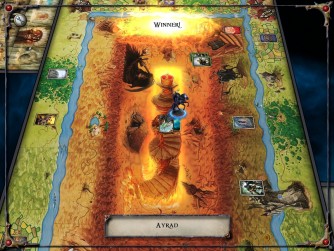 Victory occurs when you kill everyone using the Crown of Command.

It comes down to: Is Talisman worth buying? I think it is, if you can look past the racial insensitivity present in the game. However, if that sort of thing is important to you, you’re probably gonna have a bad time whenever someone picks certain characters. Otherwise, Talisman is a fun board game for you and three other people, and isn’t as viciously competitive as Mario Party or Dokapon Kingdom, and with a more structured mode of play than WarioWare. It’s a solid game that can bring hours of enjoyment—if you can look past one really dark spot.