It’s no secret to the people that know me that I absolutely love party games. Games like Mario Party, Super Smash Bros., Mario Kart, and the like. There’s nothing better than sitting in a room with some good friends, plopped on the couch in front of a TV, and playing a game with each other. You bond, you have fun, you argue, but you grow closer as friends.

But sometimes, those games get boring after awhile. There are only so many boards in Mario Party, the characters and stages in Super Smash Bros. get stale after repeated play, and Mario Kart drones on after so many battles or races. With each installment in those series, it’s just an updated version with new levels and characters, and basically all of the same thing.

What other good party games are out there that haven’t already been beaten to death over and over? To find them, you have to do some good digging. Eventually a friend of mine and I came to a new party-type-game called Dokapon Kingdom. 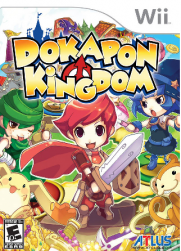 It looks childish, but believe me, you won’t be thinking that while you play the game. Unless your friend makes childish actions. Which will probably happen.

How do I explain it? Well, let’s say you take the board and item mechanics from Mario Party, take the fighting, weapons, and magic from Final Fantasy, and throw it into one game. Before you know it, you have one of the most ultimate party games ever created.

Dokapon Kingdom is the Wii/PS2 edition to the series, with a number of games existing, but only three available in North America: Dokapon: Monster Hunter for the Game Boy Advance, and Dokapon Journey for the Nintendo DS being the only others that have been localized.

First things first: Before you play this game with your friends, you should be warned. This game can start some pretty hefty arguments amongst the players. This is because the game is built around doing whatever you can to put yourself on top. This means killing your opponents as much as possible, stealing their items, money, and equipment at any chance you get, among many other procedures to ensure your success over them. Sure, Mario Party can get you heated when someone steals one measly star from you. What would you do if you spent an hour or two getting a really powerful weapon, then your friend killed you, stole it from you, then threw it away, just to be a jerk? Not even the dirtiest curse word can do that justice! 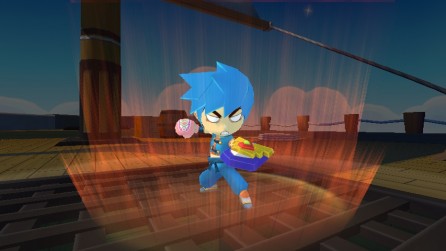 What your face will be like when your friend royally screws you over by stealing your castle and all of your items.

Here’s the basis of the game: The world has been taken over by an evil overlord, with his minions taking over all of the towns across seven continents. King Dokapon calls upon two to four heroes to help liberate the towns from the monsters and bring the world back to peace, and rewarding the winner with his daughter’s hand in marriage. Each character can start the game off as one of three classes: Warrior, Thief, or Magician. The more you fight as a class, the more you earn Class Levels, which unlock new battle skills to use at your disposal, and mastering these classes unlocks more classes to use. For example, mastering any of the basic classes lets you become a Cleric, if you’d like. Mastering the Cleric allows you to become a Monk. You can also unlock other classes by mastering multiple classes! Master the Warrior AND Thief class and…well, see for yourself! There are a number of classes that you can be after you master certain combinations of classes, and some classes have to be unlocked via other methods, such as bringing a special item to the King.

The whole point of the game is to do whatever you can to liberate the most towns that you can, build your net worth above everybody else’s, and do whatever you can to hinder your opponents’ progress. This means you can use magic to cut their stats down so they’re easier to kill, make them lose their precious items, send assassins their way to kill them, among many, many more possibilities. Get creative! Destroy the competition in any way you see fit! Whoever has the highest net worth by the end of the story, or however many weeks (every player takes one turn per day, seven turns in a week) you set the game to go across will be crowned the winner of the game. It’s dog-eat-dog in this game, and it makes for some of the most excitement (and biggest arguments!) when you’re looking for a good party game to play.

All right, let’s start breaking this game down over its many different aspects. Let’s start with the graphics.

Now, I’m not one to be a stickler for graphics. As long as the game I’m playing is fun, good, and I overall enjoy sitting down and playing it, graphics take a backseat without question, as long as they aren’t horrendous-looking. This game is no different. For a game on the Wii (and PS2), it almost looks like a game that would have been released on the Nintendo GameCube or Sega Dreamcast. It’s very colorful, and the developers did an okay job at giving some minor details to the backgrounds and layouts of some caves and other maps, but the character models are very blocky, a tad bland, and just feel very stiff. They are a bit cheesy to an extent, but personally I feel that brings the game’s charm to a solid level that wouldn’t be there if the cheesiness weren’t present! It’s colorful enough to keep you happy, but if you’re expecting some cutting-edge visuals and breath-taking cutscenes…you’re going to be sorely disappointed. Besides, you’ll be paying attention to every player’s moves and strategies, so you most likely won’t concern yourself with the dated graphics. 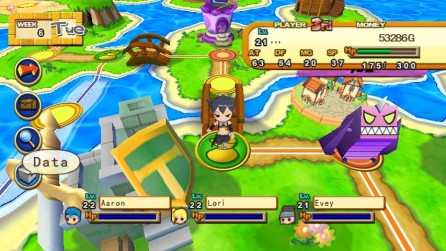 A look at the overworld, also showing the HUD and some information on the other players.

The other day I was walking around a grocery store by my home, and I found myself humming some tunes from the game. Probably because the music is just so darn memorable and catchy. It’s nothing flashy, but it’s so spot-on with the overall feel of the game. It’s a party game, not an epic RPG with a serious vibe of saving the world from destruction. As such, the music is bubbly, happy, and does a good job at changing the feel of the music at different moments and areas in the game without changing the vibe as a whole. You walk into a cave, and it has a boding sound of venturing into the unknown, but it’s still catchy, and giving you the sense of a carefree adventure, not a “do or die” adventure. It’s not a soundtrack that you’re going to want to find in a store somewhere so you can listen to it everywhere you go, but for the sake of playing the game itself, the music is pretty dandy. It gives you a sense of wonderment! It does, however, become quite repetitive, and at times feels more like stock music than nicely performed pieces.

Being a party game in essence, there’s not much in the way of plot. If you play under the Story Mode, the term “Story” should not be taken seriously. There IS a story to the game, but it’s very loose and not thick. In short, there isn’t much that you have to follow to understand what’s going on, and that’s because it’s a party game! It’s no fun for you and three other friends having to sit down and try to explain to everyone what’s going on because of some convoluted plot that is hard to follow. So no worries! You’ll have a few lines of basic text here and there, but you’ll be able to follow it without a problem, and it will only stop your game play for a few seconds! Overall the story that goes with the game is very basic and a tad cliché, if not humorous at times. One of your missions is having to get an antidote for the Princess’ dog, who ate a poisonous donut (and no, I’m not making that up).

The best kind of game is the kind that, after you’re done playing it, you can still pick up and want to play again. This is where the game really shines, because you can play through a Story Mode or Normal Mode with a friend of yours, then go and play the game with another friend, then bring those two friends together to play it again! The replay value in this game is absolutely nuts! No game is going to be the same! You can start off as a different class, and employ different strategies to put yourself on top! Take different routes and invest differently in your stats to give your character a different build until you find the one that best suits you.

There are a bunch of other goodies to go over, but I feel it best to leave that up to you to figure out. A slew of mini-games throughout the game; random events that can appear with every turn you take; secret weapons, shields, magic and items to be discovered; boss monsters to defeat using strategy as well as brute force; and the ever-changing experience of playing with friends, or those mean computer-controlled players.

Simply put, if you’re looking for a new experience in the party game genre that doesn’t feel like anything else you’ve ever played, Dokapon Kingdom is definitely a high title on the list. It’s rather obscure, so while it may be a bit of a tough find on the market, the game should only set you back around $19.99 USD. Which is amazing because this game, in my eyes, is almost a priceless and timeless classic to have in your collection.

Special Thanks: My friend who showed this title to me, Sting and Atlus for developing and publishing it, GameCola for allowing me to post this review, any energy drink that was drunk amongst my friends and I to continue playing this game into the wee hours of the night.

Use the power of platonic podcast partnerships!