Ahh, Mystical Ninja Starring Goemon…you could’ve easily been called Mystical Ninja 64 and given me a less chunky way to start this review, but you decided jamming it up my ass was a more satisfying avenue for you to pursue. 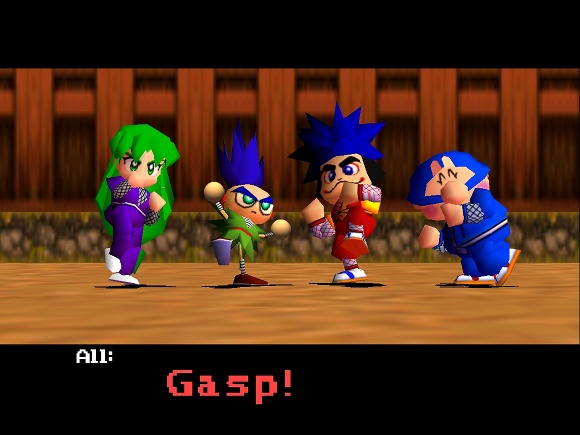 As I awkwardly begin this review, it’s snowing outside. Something to the tune of 3-4 inches and still falling gracefully. It was a day like this when I first received MNSG back in…I don’t remember. We were living in a VERY secluded and quite narrow vein of the Smoky Mountains out in Wears Valley called “Shagbark”. It’s amazing there was enough people out there to call it a community at all with one real road going up and down the length of it, two huge mountain walls only about 80-100 feet apart from each other and a security guard station up at the forefront. ’twas a day like this my brothers and I trudged all the way out from our house to the guard shack to see if our game came in, and most certainly it did. I live in a similar place today with a similar weather pattern paralyzing the county, so why not I should use some time today to review that game?

Goemon’s career here in the US is punctuated with only a few appearances on Nintendo media which always seemed to allude to something much greater, like any moment all the building up would explode and bring us a game to rival Super Mario 64 super-quality. This series was always a reasonably more polished and much more ambitious version of otherwise generic platforming for whatever era it appeared in (except for that weird top-down Game Boy game) and that fits Mystical Ninja 64 to a tee. I can’t decide if this game is better than the SNES one, but I think I definitely like it the most.

Mystical Ninja 64 can be summed up as a Japanese-flavored appetizer to the Nintendo 64 Zelda games with more Super Mario 64-styled graphics and platforming, and like Japanese food it’s pretty easy to appreciate, but it won’t stay in your system long. It’s got a nice style about it; very upbeat and pleasant and the Japanese feel totally succeeds in giving N64 owners something different. The game also serves as a quasi-parody of…something. The story is goofy even for Japanese standards: You’re fighting against a gang of what appear to be extra-terrestrial gay backup dancers who…you know what? That’s all the story you need. From there, you go all throughout Japan exploring big wide-open spots, hitting a mountain, desert, some coffee shops, hitting another mountain, some caves, and a handful of inventive dungeons.

Inventive is pretty much the cornerstone of the game here. It does pretty much everything it can to try to stand out from your average late-’90s 3D platforming fare without totally overdoing it and ruining the balance. You get to control four characters—Goemon, Ebisumaru, Yae and Sasuke—that each eventually gather their own items and magic spells to give you a reason to switch between them. There’s a lot of jumping around, climbing things, hitting pots, searching for little cat dolls to improve your health meter (basically heart pieces like in Zelda), getting keys to open doors, plus some minigames nicely spaced out to offer some breaks from the typical gameplay. You get, I believe, four towns to go through and in them you can recover your health at the inn or at a restaurant (I don’t know why they’d give you two options there), buy items and armor from stores, and even go see the most blatantly homosexual fortune teller I’ve ever seen…in a videogame. The goals are sort of represented in a quasi-RPG fashion, which I like, because it doesn’t totally give the entire goal or path away from the beginning, so when the next goal is getting a magic spell to overcome an obstacle or gain control of the flying dragon, it kinda makes the game feel more broad and adventurous.

Also, bar none, this game has one of the best soundtracks on the N64—if you squeege to late-’90s hip-hop with Japanese instruments that is (which I do).

The whole package is pretty consistent smooth sailing, but what I lament about this game is that there’s never really a time when it gets BETTER than pretty consistent. If I had the ability to score this game very finely, I’d give it a 7.5 or 7.75. Nothing in this game is really solid 8 territory. It’s quite good, but never great, and I wonder if that was the aim for this title during development. Again, this mostly just feels like an appetizer for Zelda before it came out. You swing weapons at enemies, crawl through dungeons that even use a Zelda-like map, and occasionally backtrack now that you have the tool you need to proceed where you couldn’t before, but none of it feels deep or substantial. Even the soundtrack, as much as I like it, barely goes above a certain low-level construction and catchiness with the exception of the vocal tracks which employ some recognizable singers and is something you don’t get in just any N64 game. A full run-through of the game on your first play through will probably be 15 hours.

Oh, there is one thing I nearly forgot to mention—three times in the game, it switches up to let you play as a giant robot called Impact. This would almost be noteworthy except that, personally, I enjoy the Impact spots the least. These spots include a few minutes doing some sort of rail-based Godzilla destruction on skates which somehow builds you health and money for an upcoming one-on-one boss fight. The one-on-one boss fights are pretty inventive and require a bit of strategy, but it still just doesn’t make much sense and I still don’t quite gel to it like I do the rest of the gameplay. 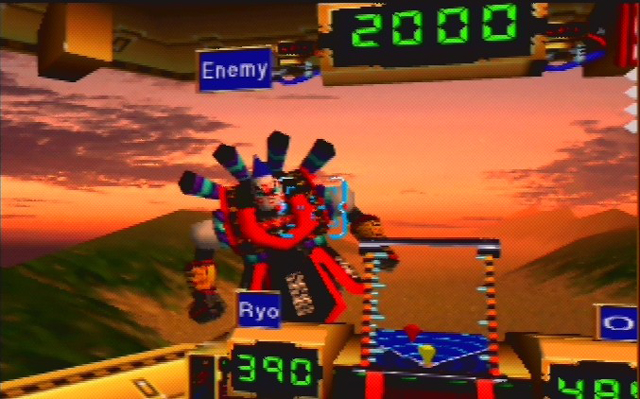 This game is occasionally frustrating, as well. You can’t manually control the camera here like you could Mario 64, and it can get wonky to say the least. I’m playing through it again right now and oh my God, I must’ve spent an hour of the gameplay I put in just for some irritating fucking jumps. There are also points in the game where it’s extremely vague on what to do next or where to go. The super-gay fortune teller is pretty good at this usually, but I still feel like I end up just wandering around more than I should. And for all the inventiveness of the gameplay, you’d think you’d get more variety of enemies out and about. It seems the development team saved them all for the dungeons—which is nice, but the rest of the game seems to only see the same 12 enemies for the duration.

As long as you don’t put too heavy an expectation on this game, it will serve your purposes well. It’s a good game all the way through, just not an incredible game. It deserves to be in every serious N64 gamer’s library all the same, and if you’ve got nothing better to do on a day when you’re snowed the fuck in, you might as well let the bright, light-hearted gameplay be the right panacea to the dreary cold of Winter.

Nothing could've prepared me for this. I read up on Baten Kaitos Origins; I read the lackluster reviews and inconsistent comments and opinions, and the only thing I got out of it was half an erection.