Yes, hi—I’m back. Remember the first one of these? I know it’s been a bit since the Ace Attorney anime ended its run on September 24, but I needed some time to look at the second half of this series and decide my real feelings on it. I tried not to be biased, because as most people know, I’m not a HUGE fan of Justice for All as a whole. I’m going to try and be as objective as possible on that front, so here we go.

Question: Should I watch the second half of the Ace Attorney anime?

Answer: How angry will you be with major changes?

Obviously, the usual spoiler warning will apply here. There’s no way to say everything I want to without getting into deep spoiler territory. Read at your own risk!

Going into the second half of this series, I thought there could not be anything worse than messing with DL-6. I mean, that has to be the cardinal sin of Ace Attorney, right? Nothing can be worse than that?

Never in my wildest dreams could I imagine what happened in the first couple episodes of the second half (reminder, we skip Case One of Justice for All, opting to go straight for the Kurain case). Or should I say, what didn’t happen.

NO MAGATAMA. Maya did not give a magatama to Phoenix to get Pearl to charge with spiritual energy (which is a part of how Pearl and Phoenix kind of hit it off, mind you) and NO PSYCHE-LOCKS. I honestly didn’t even realize it until Pearl just started talking about breaking the urn in the hallway with no prompting at all. That’s when I realized something was missing. Of course, that jumped my mind into overdrive. There are some fairly significant Psyche-Locks in Case 4. How would the anime get around that? But I digress. Let’s go in order here. 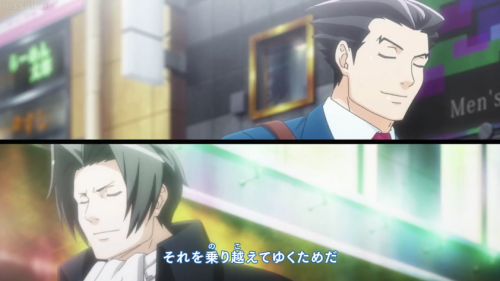 We begin with Case 2, Reunion and Turnabout, where Phoenix visits Kurain and Dr. Turner Grey (no relation) is murdered during Maya’s channeling. This case was pretty standard, with the notable exception of Psyche-Locks. The only major difference was instead of making a big deal about the bullet hole in “Maya’s” sleeve (which was brought up and immediately dropped), Phoenix made a big deal about a headdress that Maya had on, but the imposter didn’t. All roads lead to the same conclusion, as it were, but that change puzzled me. Why bring up the bullet hole in the sleeve and never use it again? Weird.

Two big pluses for me—first, Pearl. Goodness gracious, that child is adorable. And watching her when Morgan was getting taken away and seeing her certainty that Morgan’s testimony would only help Maya? Absolutely heartbreaking. 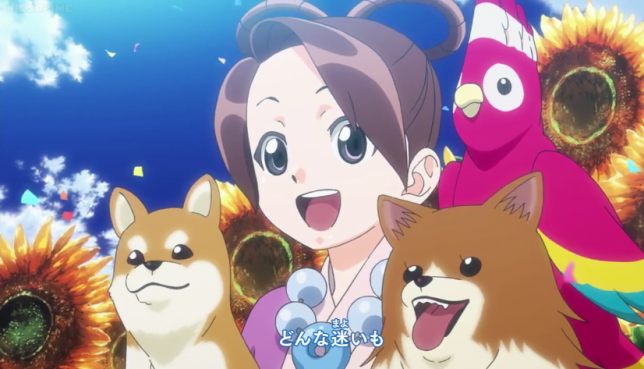 Look at this sweet child. Don’t ask why she’s surrounded by animals, I have no idea.

Second, THE QUEEN, Franziska. I’ve always loved Franziska and the anime did not disappoint. She was sassy, savage, and perfect, and I absolutely adored her. 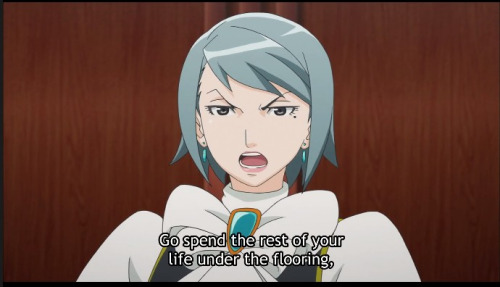 Also Lotta was back, which was great. She thankfully gave Phoenix all the information so we didn’t have to deal with Director Hotti, and her joining us for investigation led to this…interesting screenshot. 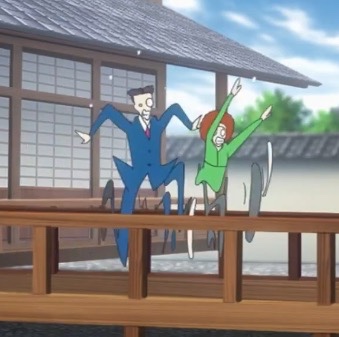 Say what you will about the animation, but when you see gems like this, you can’t help but laugh.

Other than the minor changes above, Reunion and Turnabout stuck mostly to the script, which was a good thing in my book. That case has sentimental value for me, as it was the first one I ever played. Just…why did they take out the Magatama? I cannot think of any possible reason. If you can, please let me know. But I’ll drop that for now and move on to…oh god. Turnabout Big Top. 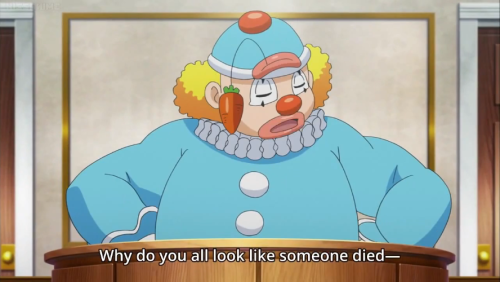 God, I hate this case. I hate the characters, I hate the premise, I hate the villain. The only good thing about this case is that tiny glimpse of Edgeworth you see at the end. The anime did absolutely nothing to change that. The few moments of humor it added didn’t make up for the strange pacing (although it does go to show that asking Ben and Trilo ONE QUESTION cuts out an entire day of trial) and the same characters that I detest. Admittedly, it may not be the anime’s fault on this one. They did add some things, like Phoenix fighting with a monkey…

Or everyone from the circus teaming up to recreate the crime inside the courtroom itself… (???) 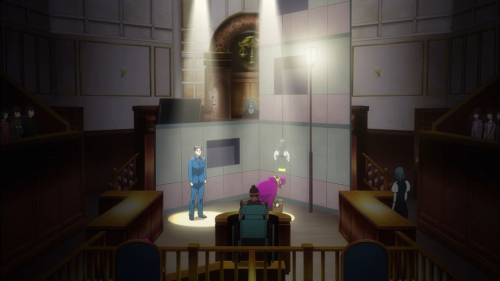 Didn’t understand at all.

But overall, I still can’t stand this case. If anyone comes up to me saying they feel bad for Acro, I’m still liable to punch them in the face. The anime didn’t change that.

And then the kicker: Farewell My Turnabout. Definitely the best case in Justice for All in my opinion, for one reason and one reason alone. 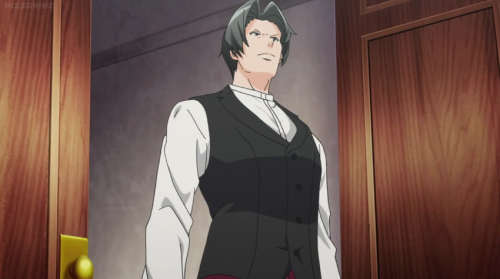 Yes, I am WELL AWARE this is from Turnabout Goodbyes. So sue me.

Yes. We have the triumphant return of Edgeworth to turn this anime around. Instead of him showing up at Criminal Affairs, he just busts into the courtroom after Franziska gets shot, with an INCREDIBLY NECESSARY AND DRAMATIC SERIES OF SHOTS.

For some strange reason, everything suddenly got better.

But in all seriousness, I think this case was handled fairly well as well (could have done without Oldbag, but…whatever). Celeste Inpax was changed to Adrian Andrews’s sister instead of her mentor, a change that I didn’t really find necessary but didn’t have a problem with, and Larry replaced Lotta as the ornery photographer, which was again strange but not too offensive.

The one real problem I had with this case relates back to the problem I have with this half of the series as a whole—no Magatama means no Psyche-Locks on Matt Engarde (although they did show them for a brief second before the secret was revealed, which I thought was kind of a cop out). Out of all the secrets that the Psyche-Locks hid, this one was by far the most important and by just having Matt Engarde reveal it after a little pressing, I feel like fans of the series would be let down. We worked HARD to break those Psyche-Locks. Maybe I’m just too salty because I’m a super fan, but if there is another season covering Trials and Tribulations, it’ll be nigh on impossible to do it without the Magatama. Those secrets are far too important to just be revealed. 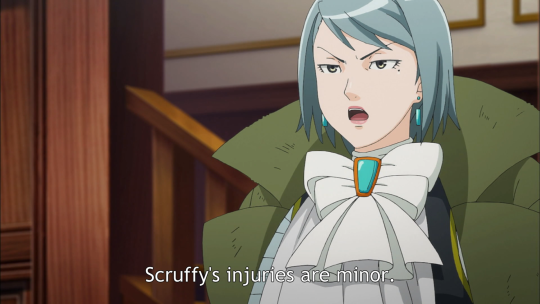 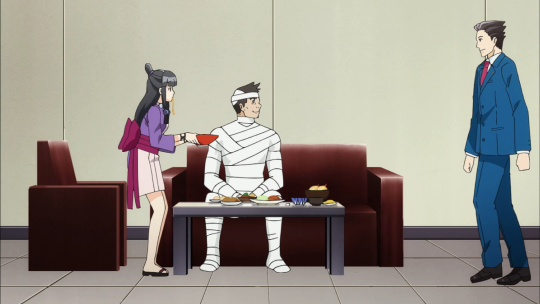 We’re at the end of an era here, folks, and I guess that means it’s time for me to give my final answer. Should you watch the anime?

If you haven’t played the games at all and have no way to, yes, absolutely. You’ll love it.

If you have played the games, yes, but be prepared to be frustrated with random changes. It’s still an enjoyable experience, but it can be really hard when things don’t go exactly how you want them to, which is the hazard of any adaptation really. We’ll have to see where the series goes from here. But for now, there’s only one way to end off this article… 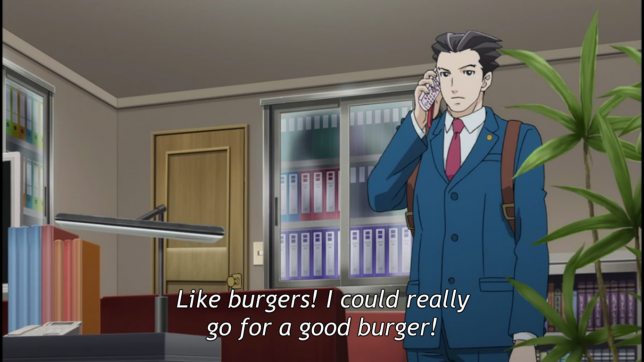 I think we all could. Fangirl out.

For those of you around the Baltimore area who enjoy video games, rock, and any combination of the two, 32-BIT GENOCIDE will be going down at the Patterson Creative Alliance in Baltimore this Saturday