Unless you have a bad Internet connection (like me) or a haunted computer (also like me), then you probably rarely get this message: “The Internet has died”. Alright, so that’s not the exact wording, but it’s devastating nonetheless. Now how are we going to look up silly cat videos? How are we going to binge-watch TV shows instead of doing physics homework? How are we going to survive in this tech-savvy world when we have the same level of technology that, I don’t know, the dinosaurs had!?

Speaking of which, if you’ve ever lost the Internet while using Google Chrome, you may have gotten a page that looks like this: 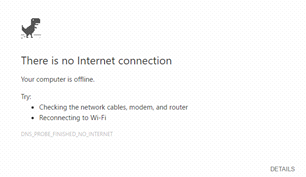 And if you’re anything like me, you probably didn’t pay attention to the weird T-rex because you were frantically refreshing the page and clicking through your network settings as if that would solve the problem (which it actually might). And, if you’re REALLY like me, you eventually gave up and did a rage keyboard smash…which is what I did when I discovered the magic of the T-rex. 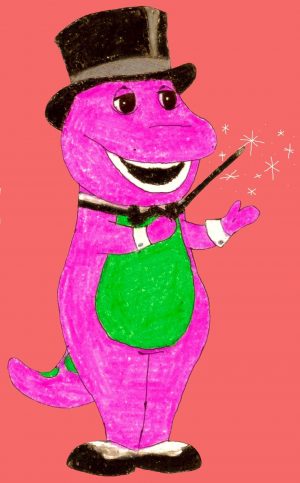 Deep inside Google Chrome’s coding is an Easter egg for this game called “T-Rex” or “T-Rex Runner“. Essentially, whenever Google can’t connect to the Internet, it makes amends by leaving you this game to play while your computer tries to identify the problem and/or reconnect to the Internet. The game itself is extremely simple, both in concept and design. Basically, you’re a tiny T-rex running through the desert and avoiding obstacles, namely cacti and pterodactyls. The space bar or up arrow jumps, allowing you to bypass cacti and low-flying pterodactyls, and the down arrow ducks, so you can safely run underneath aerial obstacles. 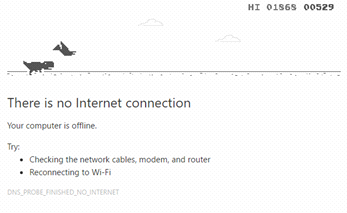 After every 100 distances (meters?) you travel, the game makes a delightful ba-ding sound, reminiscent of a Mario sound effect, and the side-scrolling speeds up. The faster you go, the harder it is to time your jumps/ducks right, and if you accidentally crash into a pterodactyl or land on a cactus, that’s it… 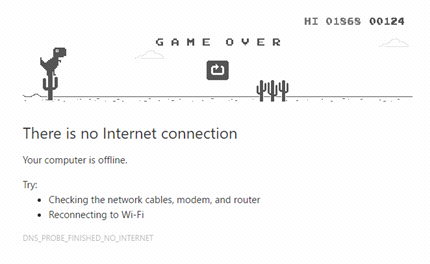 Hitting the space bar or up arrow restarts the game, places you back at distance 0, and randomizes the stage so you don’t encounter the same cactus twice. And…that’s pretty much it. You can play this again and again and again, until you get sick of it or your Internet starts working.

If this were a normal console or computer game, it could get really old, really fast, because of its simplicity and repetitiveness. However, since it only pops up when the Internet gives out (or you intentionally turn it off), it’s actually rather enjoyable. And addicting. I mean, it’s an adorable tiny T-rex with a derpy running animation jumping over cacti…what else could you possibly wish for!? 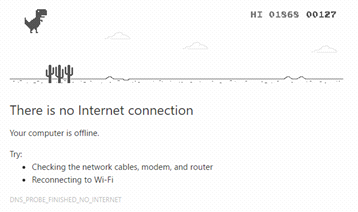 The game also has some great innovations. Or you know, like…three? Aside from leaping over cacti and ducking under pterodactyls, there’s also the day/night cycles. After you travel 700 meters, or whatever measurement of length this game uses, the screen turns from white to black, and the moon and stars come out. 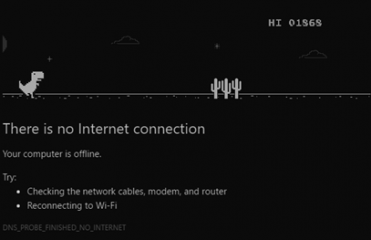 Despite the initial terror that comes with your screen unexpectedly turning black, this is a really cool part of the game. The changing background, coupled with the increased speed and random obstacles (and possibly your desperation to find something to do without the Internet) keep the game fun and interesting.

Overall, this is a charming game, and a great diversion from panicking about having no Internet. The animations are adorable, the idea is definitely innovative, and it’s simple enough that nearly everyone can play it. The only downside is that this game is tied to the Internet, so whenever the Internet comes back on, you automatically get exited out of your game and your high score is lost forever. But, hey—that’s OK because you really had important things to do on the Internet anyways, right?

For the scientifically minded among us...