2064, Neo-San Francisco—a city straight out of an optimistic ’80s or ’90s cyberpunk anime. A city where people and robots live together in (sort of) harmony. Also everyone is gay. Everyone. Even your sister. This is the world of Read Only Memories, a cyberpunk point-and-click adventure/visual novel. 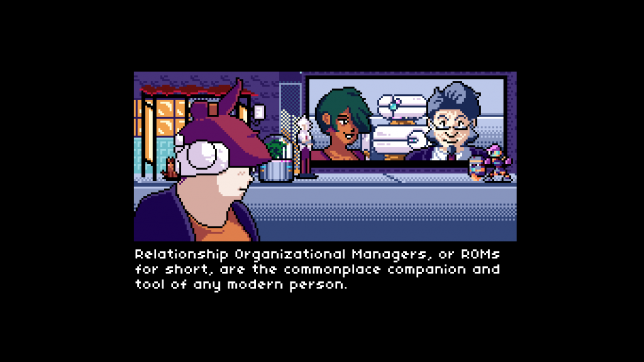 One night, you—a journalist falling on hard times—get a visit from a curious little ROM (Relationship Organizational Manager; a personal assistant robot) named Turing. After breaking in and accidentally frying your dinosaur of a laptop, they ask you to help find their creator, who was just kidnapped from his apartment. This man just happens to be your friend Hayden, who you haven’t seen him in a fairly long time. While he was busy not talking to you, Hayden has been working as an engineer for the company Parallax. A little side project of his has been experimenting with ROM sapience, his latest creation being Turing. 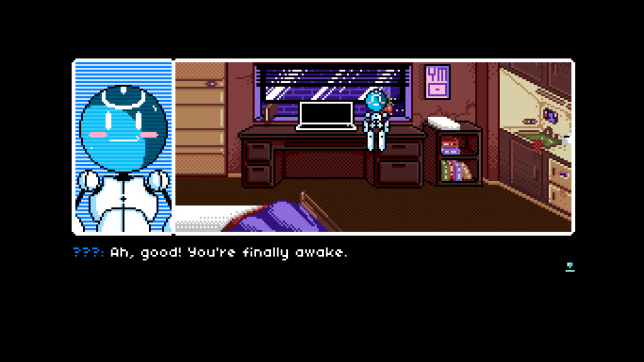 It’s not long before you’re making your way through different parts of Neo-San Francisco, searching for your friend with the help of the NSFPD’s newest detective/your sister’s ex, a hacker, a literal cat lady, an old guy in the hospital, some punk-ass children, and a sassy as all hell retired CEO. During your search for the truth behind your friend’s disappearance, you uncover something much bigger and more sinister at work behind the scenes. You, Turing, and your friends get dragged deeper as more questions arise and more people get hurt.

The game’s cast of characters is diverse and wonderful. It’s very inclusive, to the point of allowing you to input your own pronouns if you wish. Trans and gay characters are everywhere in Neo-San Francisco. The game also includes human hybrids who have been using the advanced technology of THE FUTURE to change their skin color, give themselves animal features, get robotic limb attachments, etc. It goes beyond the realm of natural possibility, which angers and upsets a group calling themselves the Human Revolution. They do things like protest outside of clinics because of how unnatural hybrids are. This creates a lot of problems for a lot of people, kind of like it does in the real world. 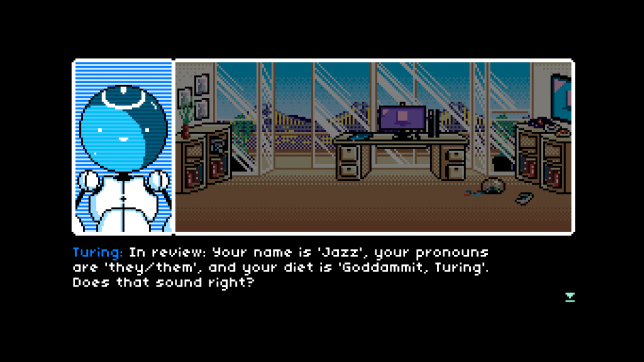 You can also choose your diet preferences

This game is awesome. I love the settings, the music, the characters, and all of the things you can interact with. At one point I think I tried to marry a chair and got rejected. It was great. To interact with objects or people, you’re given the option to touch/pick up, talk to/eat, look at, or use an inventory item on. You have the option to pick up an expired carton of milk and keep it in your inventory the entire game (or you use it in a puzzle later). Also, you can drink until you pass out. Talk about immersive. 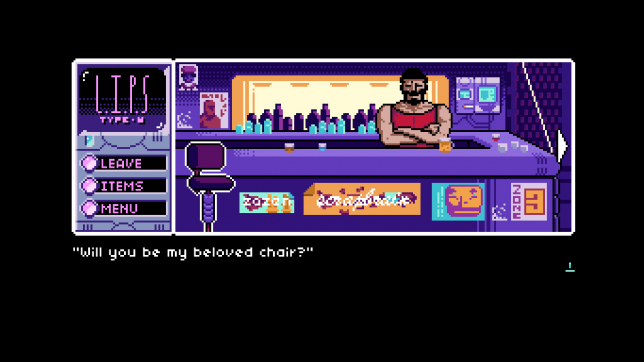 I wasn’t lying about the chair thing

You can keep this in your inventory the entire game

This game is a bit more visual novel than it is point-and-click. The puzzles are straight forward and fairly easy. The story seems to be the main focus, which is fine by me. There are a total of six endings you can get for this game. In my own words I would describe them as: best, sad, oh god, I deserved this for being a jerk, okay I guess I did my job, and everything is sad. All are based on three different things: how Turing feels about you, whether you failed a certain puzzle or not, and your choice on one major decision. 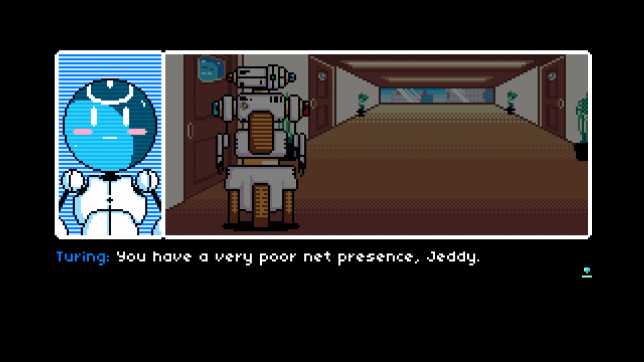 This is too real.

While the game doesn’t have branching pathways, it does allow you to solve a few puzzles differently. The game won’t trap you in a “you screwed up, you can’t continue” situation, and there’s only two times you can die. You can also have a different relationship with characters based on dialogue you choose. In order to get every achievement, I went the “I’m going to be a huge jerk to everyone” route for my second playthrough. It was terrible, and I felt bad about myself. How you interacted with people contributes a bit to the end of the game as well. Whether you can rally the punk-ass children and the literal cat lady to help you with a distraction at the end of the game or not depends on how you acted towards them throughout the game. 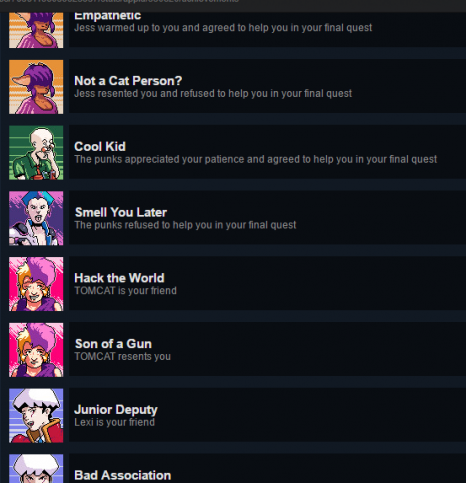 Achievements based on how you act

This game is a lot of fun and it has a great story to boot. Personally, I have put over 34 hours into the game in order to get every achievement I could and to see almost every dialogue option…and to drink every drink available at the bar.

After January 17th, 2017, I will be putting more hours into this game because it is receiving an update! 2064: Read Only Memories is a free update for those who already own the game, and will be coming to the PS4 with full voice acting and other neat tweaks to the original game.

I would absolutely recommend this game to anyone looking for a sort of mystery adventure through a cyberpunk world. If you’d like to check out the trailer for the new and improved game, you can click here. 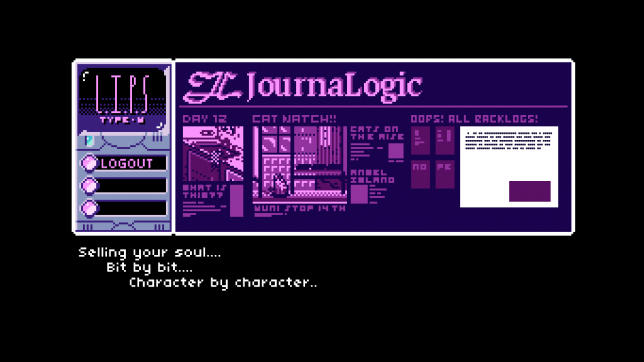 Who needs to fight when there's a bottomless pit conveniently placed nearby?