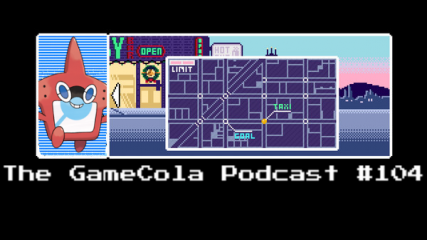 It’s been a fun year, and we’ve actually played some videogames! This time around the GameCola cavalcade of Diana Gray, Anna Bryniarski, James Pelster, Alex Jedraszczak, and Joseph Martin take a look at the cult futuristic hit Read Only Memories, which Jeddy just finished. Then we try to talk about monster collecting RPG’s, but we mostly just end up talking about the most recent Pokémon game. If you’d rather see that paragraph in list form…

And some more stuff here and there. In fact, we had enough fun on this podcast that you might see a bonus, off-topic edition for this entry into the GameCola podcast series. If you’d like to stay up to date on that or any other GameCola happenings, be sure to check us out on various hyperlinks such as YouTube, Twitch, Facebook, Twitter, and iTunes! And if you have anything you’d like us to talk about on the show, be sure to email your questions to podcast[at]gamecola.net!