Over the past several decades since videogames came to fruition, there has always been that question of longevity. How many hours could a player sink into your game before they either beat it, grow tired of it, or start making silly challenges to keep them engrossed (yeah, Fortnite). But can a game truly deliver a ridiculous amount of game time, along with replayability, AND still be fun for the player? Our answer lies in this hidden gem from the PlayStation 4: Disgaea 5: Alliance of Vengeance.

Disgaea 5 is a tactical RPG developed by Nippon Ichi Software and NIS America in 2015. Disgaea 5 marks the 6th installment of the series, dating all the way back to the PlayStation 2 days. The game itself was originally released on PlayStation 4, resurfacing with a remastered version on the Nintendo Switch in 2017.

Although most of the stories in the Disgaea series focus on revenge, Disgaea 5 takes the “revenge” cake and puts it directly in the title (or was it “vengeance”…). The game picks up in the distant future, following the lone wolf demon Killia as he travels the Netherworlds pursuing the Nether realm tyrant Void Dark and his army, in hopes of finding revenge. Along the 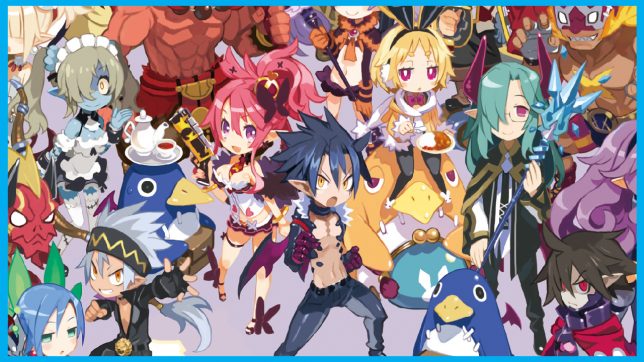 way, Killia gains allies against his will, all of which have their own personal vendetta against Void Dark. These characters include the likes of Seraphina, the Overlord of Gorgeous, who ran away from home to escape an arranged marriage to Void Dark; Red Magnus (a fan of The Rock, for you WWE fans), the Overlord of Scorching Flame, whose Netherworld was destroyed in his “absence”; Christo, an angel framed by his own kind; and Usalia, the overlord of Toto Bunny whose parents were killed by the Lost.

If you’ve read any other reviews of this series, you’ll hear that you don’t play Disgaea for the story. I couldn’t disagree more! The main theme of Disgaea 5 is revenge, but there are more elements present across a multitude of characters, and many reviewers don’t give it justice. The story presentation itself takes a more fan-fiction approach, and can be satirical at best. But given the basic parameters of story development, you’ve got a lighthearted, chuckle-inducing incline to the climax, and it only goes up from there. One moment, you’re fighting for your life against the demon general Bloodis, the next you’re fighting for your life for….curry? Yeah, I rest my case. 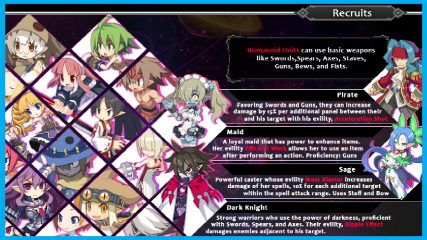 as a certain unit must not die.

Given the generic description above on how classic tactical games work, Disgaea cranks the crazy up to 11 (or 1,111,111,111,111). The thing with Disgaea—as expected with any anime trope game—is the damage numbers you deal are extraordinary; they are borderline insane. But there is one feature that truly make this game different from its genre brothers: stacking. Stacking is an ability you learn in the first Netherworld—scratch that, the second level of the game! A unit can pick up another unit and throw them to close a gap. Units can even stack on top of each other, then toss each unit to the maximum reach. Theoretically, this can lead you to get one unit all the way across a lengthy stretch of board in one turn. This gives players a different, unique way to approach and avoid enemies, or strategically traverse harsh terrain.

Don’t get me wrong, I love grit and challenge as much as the next guy, but should a game really be made excessively difficult just for the sake of making the game last longer? This was a huge issue back in the day; a classic example being Castlevania II: Simon’s Quest. The game itself is stupidly difficult, and at most times, unforgiving. It’s like its whole objective is to drain as much time as it could from your life. Disgaea 5, on the other hand, pulls its difficulty from a different source (not a curse).

There is so much content in Disgaea 5 that the old ‘Vania II approach would be rendered useless, but don’t let that give you the idea that Disgaea 5 is a walk in the park. As with any tactical game, you are bound to run into issues with certain units, especially if it’s your first time playing. As the story progresses, you travel between different Netherworlds, each of which boasts its own gimmicks and traps to throw any player off their game. A good example is the netherworld Demunshroom. This fungus-themed netherworld has a global effect on levels that randomly spawns Fungus units. Each unit provides a random debuff effect for players. This throws in a varying range in terms of difficulty geared not only towards the player’s expertise with tactical games, but how they adapt to varying situations. Given this specific instance, one player could blast through no problem, while another player could find themselves overwhelmed by the ceaselessly spawning enemies.

If there’s one thing that Disgaea 5 excels at over other modern games, it’s the audacious amount of content available to the player. The main story alone boasts an average of 41 hours to beat, with an additional 38 hours worth of bonus missions and content. And did we even mention the DLC available? There’s a reason why this game got a remastered version for the Switch with all bonus DLC built in. But what exactly does Disgaea 5 do right to make such long feats of gameplay worthwhile? 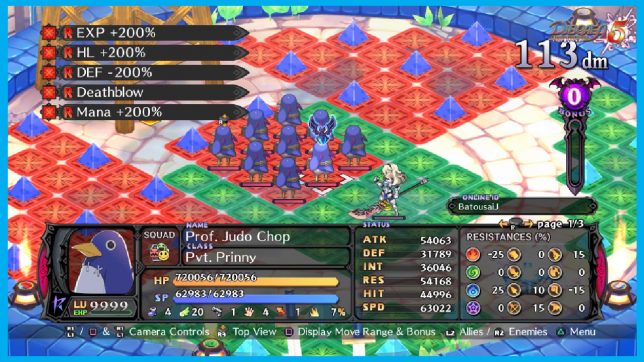 Disgaea‘s lengthy game completion time has never been coupled with its difficulty; but more the obscene amount of content the game offers. Between item levels, skill levels, unit levels, player-designed levels, and even squad levels, there is so much stuff you can grind and improve upon in Disgaea 5. Even after a player is done with the main campaign, there are always bonus missions, and even a Map Editor where players can make and share maps with others online. But all of this pales in comparison to the biggest factor in replay value: Reincarnation.

Much like in previous Disgaea games, Disgaea 5 includes a feature called “Reincarnation”, which surprisingly boosts the game’s longevity as well as replay value. The process of Reincarnation is where you can reset your unit back to base level 1. But hold the phone—there is a reason for this. Each unit has a default class, but can also choose multiple classes to level up. If you have the free time, I personally recommend trying to 5-star as many classes on a unit before reincarnating. When you reincarnate a unit, you get bonus permanent stats based on the level of ALL your classes. Keep at it, buddy, you’ll be stronger than Broly one day!!

At first glance, this may seem like a weeb game with no real purpose in the AAA world, but I believe this one has definitely transcended its bestowed nickname of Mid Boss. If you are a fan of tactical games, enjoy extreme levels of grinding, or just enjoy a story with more laughs than a Fortnite player playing anything else, then this hidden gem is for you. The fact that the game already has PlayStation 4 and Nintendo Switch releases—with a PC release coming this year—this game has got to be on your wish list. Just hurry up before Void Dark makes the game illegal in the nether realm.

Never fear, GameCola Faithful: Atlus has heeded your cries. "Persona just isn't weird enough anymore!," you said. "Can you please make a game in which you grow a pair of goat horns and fight off mutan