Following Paul Franzen on Twitter is profoundly dangerous. If he isn’t telling you the grisly details of his friend’s gaping stomach wound or posting beard grooming tips not approved by the FDA, DOJ, or WWE, he is linking you to gaming sales that you would have to be stupid to pass up. The size of my adventure game backlog and beard are both directly proportional to how long I’ve been following Paul, and I would highly advise staying away from his Twitter feed if you are trying to save money or are pregnant or might become pregnant (long-term exposure to Paul tweets has been linked to fetal beard growth by several reputable sources). Regardless, it is because of Paul that I discovered the Summerbatch, a group of indie adventure games that were so hidden away in an obscure corner of the interwebs that even hipsters hadn’t discovered it yet. I was able to pick up five adventure games for the low low cost of one misshaped L, which I thought was either a great deal or a tremendous mistake, as I have no idea how to translate British funbucks into American cash.

I spent a lot of time debating which of the five games I’d dive into first, and after an arduous review process I finally decided on Barely Floating, a classic point-and-click adventure style game released by Stemshock Interactive. My rationale was two fold: 1) It was at the top of the list alphabetically and 2) It looked the ugliest out of the five, meaning I could only go up from here. Honestly, check out these visuals: 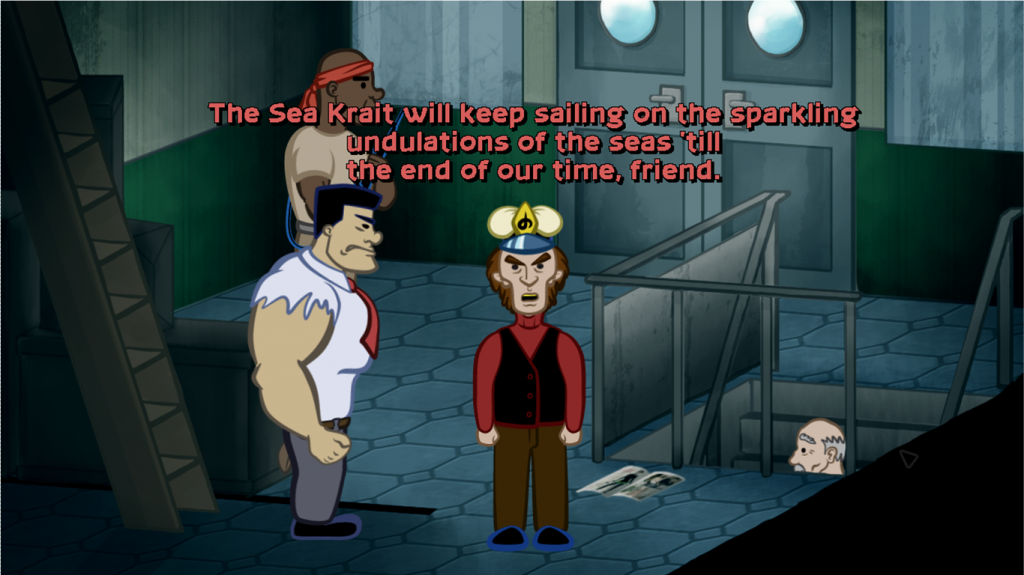 It looks like the South Park guys decided to see if they could illustrate a game using only their feet. It is nice that the art design was awarded to whatever middle school student won their raffle but maybe next time they can give the job to someone who has some working knowledge of what a human body looks like. My enthusiasm was quashed even further when some preliminary research into the game revealed that after Summerbatch ended, you can’t even purchase the game anymore, and all that’s currently left of its existence is a demo. They are promising some sort of deluxe edition will be released later this year, but I’m not sure if it is legally possible to advertise something as a “deluxe” edition when it is literally the only version that can be purchased. Also, this game is completely awful, so I would only consider it the deluxe edition if it came packaged with a different, more entertaining game.

I honestly don’t have a lot of good things to say about the game, and I could go on for pages complaining about nearly every aspect of it. However, I feel bad destroying an indie game when it most likely had a budget of whatever was in the developer’s couch cushions, so I’m going to give Stemshock a chance to defend themselves. I’m going to go through the list of features the developers themselves listed on their own page when trying to boast about the game. Remember: This company is trying to sell this game to you. You might forget about that after seeing the list.

Well, we’re off to a fast start. That isn’t a damn feature, Stemshock. This is just the genre. That’s like saying “see this comedy; it’s a comedy!” C’mon, Barely Floating. Sell me on something here. Tell me you have brilliant point-and-click puzzles or an amazing interface or that you work on a computer or anything. It doesn’t bode well that the people responsible for marketing this game sat down, came up with a list of all the best selling points about their point-and-click adventure game, and after editing it and whittling it down to the six most noteworthy features, the thing at the very top of the list is the fact that it’s a point-and-click adventure game. They refuse to even throw an adjective in there like “excellent” or “enjoyable,” like they were paranoid that lying about their product on the Internet would get them thrown off it.

Honestly though, in a weird way “point-and-click” adventure summarizes the game perfectly. It is pretty much a standard point-and-click adventure with standard puzzles and a standard interface, so I guess you do get what’s on the tin here. There is nothing interesting or noteworthy about the game in any way, and at least the company has the honesty to be up front about it. None of the puzzles were particularly clever or forced me to think, and there were multiple times where I would get an item and figured out what the puzzle was going to be even before I got to it. There are only a couple of puzzles that I would classify as somewhat difficult, and that’s only because the game doesn’t tell you what the hell it wants you to do. 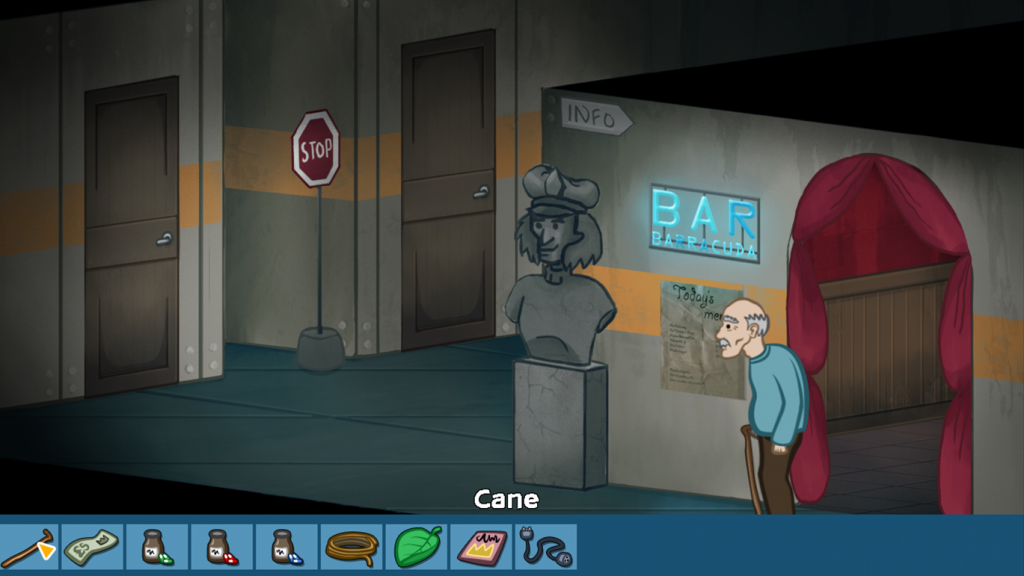 Oh, I see now. The promotional team was saving all their lies for the second blurb, because calling this game a comedy is like calling Angry Birds a dramatic period piece. Prolonged exposure to this game leaves you physically incapable of smiling or hearing laughter. It is the adventure game equivalent of Jay Leno, and the only people laughing at it are doing it for all the wrong reasons. The “jokes” in this game are more likely to draw groans than laughs, and if this game is classified as a comedy then so is Tetris, because I’ve laughed at each an equal amount of times. And, of course, being a “comedy” adventure game the writers felt obligated to shoehorn in a couple of obligatory references to Monkey Island and hope that counts as a joke. To all aspiring adventure game writers out there, stop doing this. You aren’t making anyone laugh. You’re just making them wish they were playing Monkey Island instead.

Barely Floating throws you into the role of an old man stuck aboard a cruise ship that was taken over by pirates, and your only hope for rescue gets shot in the head in the opening scene. It somehow gets less funny from there. Nearly the entire cast of characters are boring, one-trait stock characters that never do or say anything that comes close to approximating what humans would refer to as comedy. The worst part is you can tell it’s trying to be funny, and earnestly unfunny is the absolute worst kind of funny. I feel like I’m watching a little kid run through their entire repertoire of knock-knock jokes, and I don’t know if I should pity laugh or punch them in the teeth. Fully animated characters? HELL YEAH. I hate when I’m enjoying an adventure game only to find out that all the characters are floating torsos because somebody forgot to animate the legs. I’m sure fully animated actually refers to some programming feature that I could care less about, because if this ugly mess is fully animated I want whatever the hell the alternative is.

Well, at least the resolution is good. Also, I love how by this point it’s become completely obvious that the company itself isn’t that impressed with its own game. They refuse to use any superlative adjectives, so instead of getting something like “beautiful fully animated characters” or “impressive original soundtrack,” we’re left with “Yeah, there’s music. It isn’t good or anything, but it totally exists and is there.”

Holy shit, they’re not even trying anymore. I mean, this is a completely accurate reflection of the playtime, but nobody wants to actually pay for a game that is only slightly longer than completely free Flash titles out there.

What we’ve just read through is a company begging you not to buy their terrible game. I highly suggest you listen to them, because Barely Floating is a poorly written, thoroughly unfun adventure game with mediocre puzzle design if I’m being generous, and an absolute abomination and crime against humanity if I’m being overly dramatic. But while we’re on the subject of abominations…

I don’t know what is with my awful luck with adventure games lately, but not only have the last few I’ve played been utterly disappointing, they both have gone out of their way to insult beards, an offense punishable by GameCola review standards by an automatic dispersal of a score of 3 or lower. Things start off well enough, and the bartender in the game has a glorious and magnificent beard even by our standards. 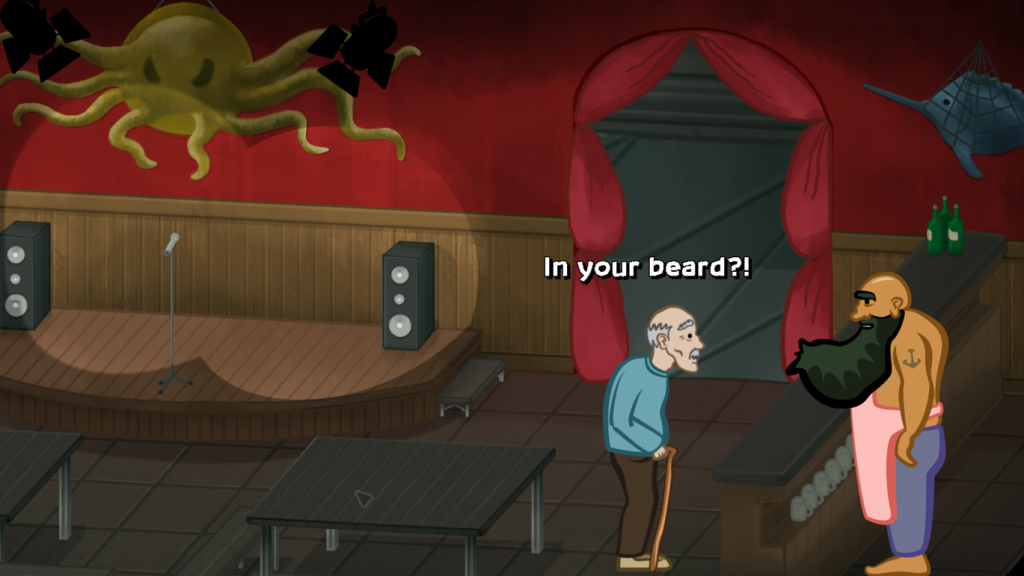 And that’s when we find out the terrible truth about our geriatric hero: He’s a beard bigot. He starts taunting the poor bartender about how dirty his beard is, and one of the actual puzzles in the game is to get the bartender to wash his gross, disgusting, filthy beard. 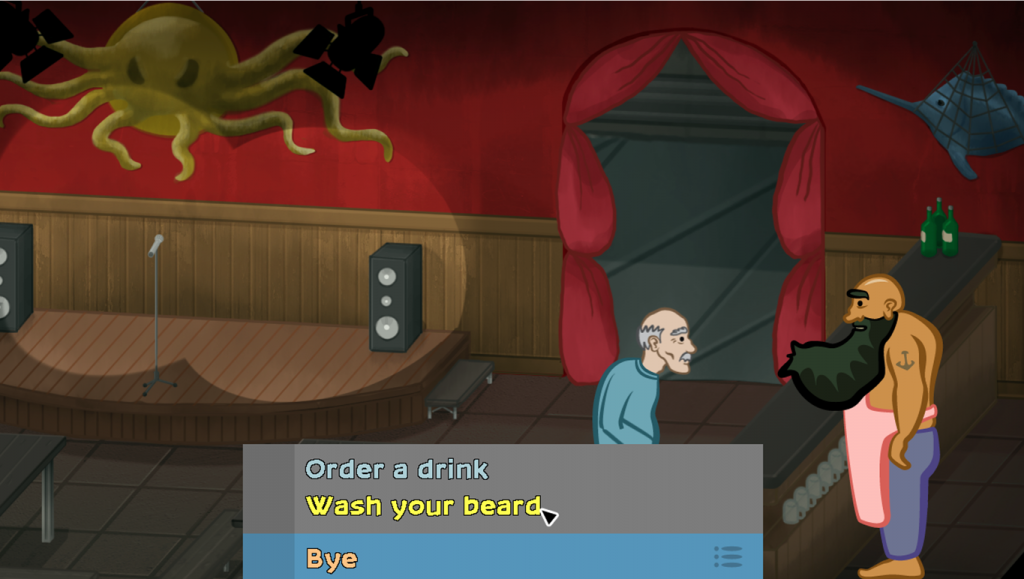 I’m not sure what his problem is here. Can’t he just get along with his bearded brethren? Is it really necessary to force him into mandatory beard washes? It isn’t like there’s a monster hiding in there or SWEET MOTHER OF PEARL WHAT THE HELL IS THAT? 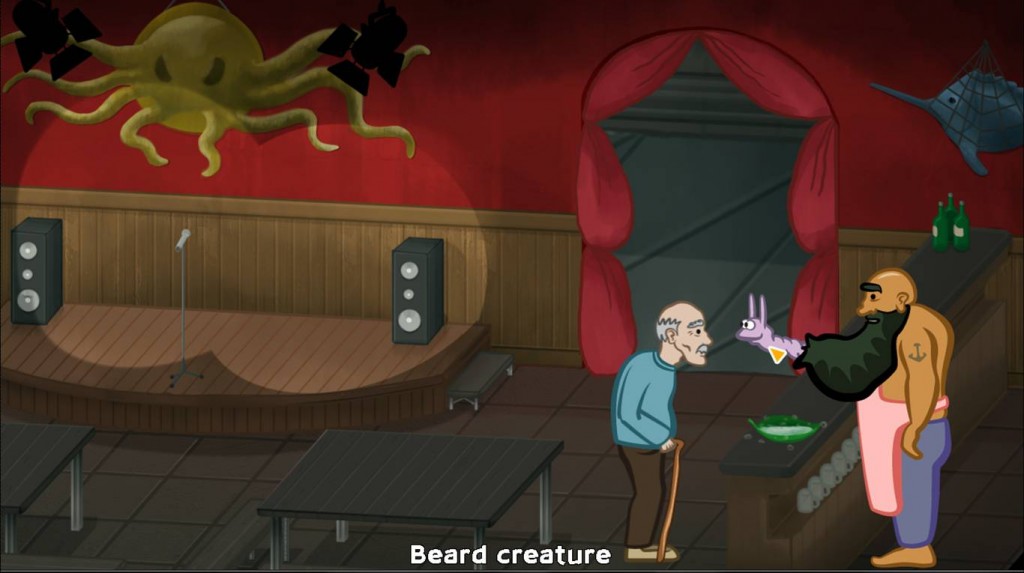 Oh, a beard creature. Of course. HOW DARE YOU, BARELY FLOATING. Are we really going to perpetuate the long-standing myth that all people with beards have creatures living in them, ready to sprout out and attack you at a moment’s notice? I thought we had gotten past that dark stage in our history. Remember kids, there are no such things as beard monsters or creatures that live in people’s beards. Just ask Paul’s beard creature, the Amazing Zolthar.