(Editor’s note: This article was originally published in the October 2008 issue of GameCola, back when GameCola was published in a monthly online magazine format.)

This month in Dear Readers, I’m going to talk about a videogame system you’ve never heard of before.1 I was originally hoping to become the number one source on Google for information about this system—thus raking in oodles of new hits from people trying to figure out what this chunk of plastic they found at a yard sale actually is—but, apparently I was beaten to that eight years ago by Robert Morgan, who wrote a whole FAQ for the system.

Still, I’m not one to let relevance or timeliness deter me from writing about anything. And I’ve got one thing over Robert Morgan and his fancy-pants FAQ: He may have done it first, and in more detail, and on a better-known site…but I’m doing it with pretty pictures and videos.

So what about the system! If you’re a cheater, you clicked on the FAQ link above and already know all about it. (You probably haven’t seen a picture yet, though! Just keep those eyeballs moving downward, sunshine.) If not, here’s the so basically: It was released in the U.S. in between NES and the Sega Genesis, it runs by mysterious means, it’s called the “Interactive Vision,” and it looks exactly like this: 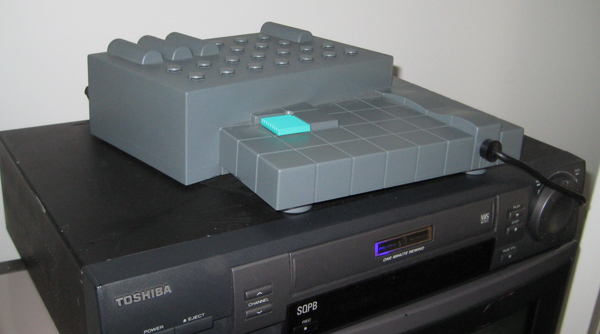 Apparently born via the unholy union of of Lego and…I don’t know, graph paper?…this ridiculous-looking videogame system was created by View-Master3 and marketed as, if Robert Morgan and his fancy-pants FAQ can be believed, a learning tool for children. Its library corroborates that story, as all seven games for the system are based on either Sesame Street, Muppets, or Disney licenses.

To you Doubting Thomases out there: Yes, this really is a videogame system. To you Believing Billys: There’s a reason Tom is doubting us, and that reason is this: There, very clearly, isn’t any slot to insert any games into this system. Right? Do you see one? The Internet hadn’t been invented yet, either, so the system doesn’t download titles, and I’ll just add right now that it doesn’t come preloaded with games, either.

What is going on here?!

Take a closer look at the above picture. Can you figure out where the games go? Here, I’ll give you a hint: 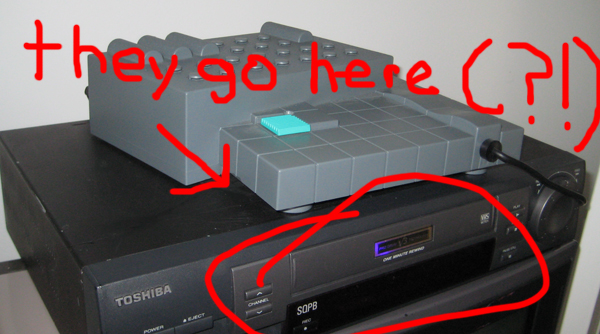 And you thought I was just being a bad photographer by including my VCR in that shot. Yes, the IntVis4 actually connects to your VCR and runs on VHS tapes. Which, of course, doesn’t make any sense at all.

So now the question is this: How can a system like that possibly work?

Answer: Robert Morgan tells us that “the system operates by downloading program information from the videocassette.” How does computer data get onto the VHS tape and then travel to your VCR? Morgan doesn’t go into this, but the underlying assumption is: magic. The system is then able to manipulate the video in a number of ways—the most pointful of which involves superimposing Atari 2600-esque graphics on top of the video footage.5 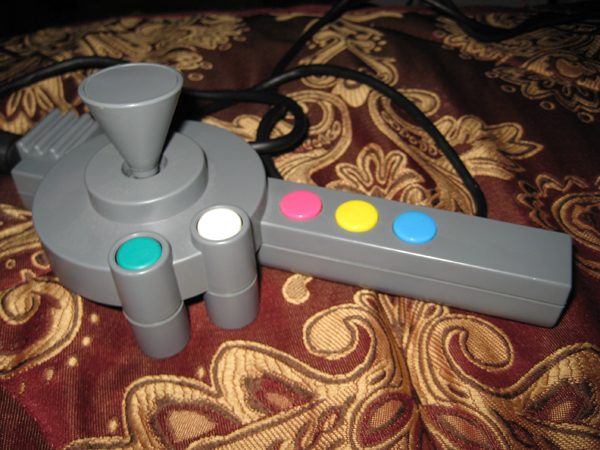 That’s the controller, and it’s as easy to handle as it is beautiful. It’s permanently tethered to the system, and, at least for the game I played—Disney’s Cartoon Arcade—of the five buttons it has, four are redundant. Every single button had the same function, so, to think in a glass-half-full kind of way, at least you have plenty of choices! Hey—some days you just feel like the blue button, and some days you just feel like the blue-green button.

To get the game up and running, you have to plug the IntVis into your VCR, and then plug your VCR into your TV. Then you turn on the IntVis, turn on your VCR, hit play on the VCR, and hope something happens. After that you….you know what? I bet YouTube can help me out here. There weren’t any IntVis videos already available on the site, so here’s one I made of the system’s intro:

I’m not going to go in-depth talking about everything you do in this game—suffice it to say there’s an awful lot of minigames that don’t offer a lot of variety—but I would like to describe one. The first one, because it’s the only one I was able to get video footage of before my TV decided that it didn’t want to recognize the IntVis any longer:

Pretty neat, huh? We can (sorta—filming this thing really doesn’t work well) see here that the video gives us a still image of a spooky library/den, and the IntVis superimposes the gameplay of me pointing at ghosts and clicking on them to make them go away. Minigames like this really emphasize this system’s value as an “educational tool.”

Here’s what it’s supposed to look like when you’re not trying to film your TV with a digital photo camera and when the TV and the system get along: 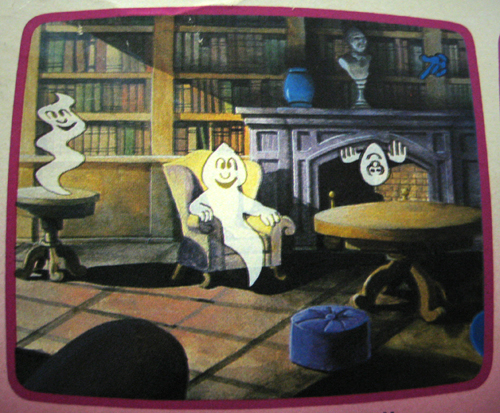 Actually, I don’t think the game could ever possibly look that good. All of the minigames in Cartoon Arcade play out more or less like this—some are Frogger ripoffs, some are puzzles where you have to rearrange the images to make a complete picture, and all could easily be done on an old Atari, without the cartoon backgrounds.

As for other games for the system…we can probably assume that they play out similarly, but who knows! Actually, you could knows. I own four other games for this system, and, if you’re interested, I’d have no problem writing a full review of one of them.

And that’s what I know about View-Master‘s Interactive Vision! For more, read the FAQ or post a comment asking nicely for a review. I’ve got plenty of other resources, too—if you want to see scans of the manual or game order form, more videos of the games, photos of the games themselves, or anything like that, let me know. I’m here to help. And I’m here to get your hits.

One day, Robert Morgan…we will be ranked higher than you on Google.

Nope, no wait! We’re not done yet. Here’s a quick hit list of what you can expect to see in this month’s issue of GameCola:

1. I know this is true for the following reason: The system is so unknown that it doesn’t even have a Wikipedia page.2

2. Activity of the Month: Write a Wikipedia page for this system, citing GameCola!

4. I totally just made that nickname up. Pretty cool, right?

5. It can also alternate audio tracks, switching from the background tune of the tape to, for example, applause if you do well, but that’s not interesting enough to be more than a footnote.

7. This screenshot is actually taken from an image on the IntVis’s box. If you wanna see shots of the box—including a special message from the President of View-Master!—click here and here.

Loot boxes have become such a tremendous hit among game publishers that GameStop has found a way to have a slice of the deal.