Mega Man 4 may not have the niftiest weapons, hippest bosses, grooviest music, or sexiest box art in the Mega Man franchise, but that doesn’t stop it from being the best game in the original series.

Yeah, you heard me right: Mega Man 4 is the best game in the original Mega Man series. Stuff that in your arm cannon and fire it.

For starters, Mega Man 4 knows how to kick off a game: before you even begin playing, you are treated to a cutscene in which Mega Man’s origins are explained, the plot of the game is unfurled, and lots of buildings SORT OF EXPLODE. Seeing as Dr. Wily supposedly didn’t survive the end of the previous game, Mega Man instead sets off to fight Paul Franzen.

Wait—no. My mistake. I meant a mad Russian scientist named Dr. Cossack, who, in case Michael Gray doesn’t mention it in his review of Mega Man 5, bears an uncanny resemblance to GameCola head editor Paul Franzen. It’s the beard, which makes him inherently more awesome than Dr. Wily.

Dr. Cossack, that is. Not Paul.

Some people criticize Mega Man 4 for a lack of creativity because it doesn’t stray too far from the proven Mega Man formula—but these are the same people that complain that hamburgers always consist of a hamburger patty and a bun, mind you. If you can get past the fact that Mega Man 4 didn’t shake the foundations of the gaming industry, you’ll see that the game offers enough variation from its predecessors to still be unique.

Mega Man’s dinky pea-shooter of a weapon has been upgraded to fire a more powerful shot when charged up, allowing you to at least make a dent in a boss’s energy meter before you get mercilessly obliterated. A few stages have an alternate path you can take, two of which lead to special items you can add to your arsenal. And a walking robotic suitcase named Flip-Top shows up in some levels to give you a random power-up, which, conveniently, is always the most useless item possible.

The game’s challenges are a blend of brand-new ideas and variations on past designs: falling ceilings that will squish you flat, solid ground that doesn’t appear until you flip a switch, enemies that turn out the lights if you kill them, a boss battle where the entire room attacks you, and giant hippos. Giant hippos are key.

Mega Man 4 is also more streamlined than the games that came before it. The first three Mega Man games suffer from an unprofessional amount of sprite flicker, plus the inability to switch weapons if one of your projectiles is still on the screen (anybody who’s ever missed a shot with Gemini Laser or tried to fight Guts Man with Hyper Bomb knows what I’m talking about). Bosses may be vulnerable to anywhere from one weapon to half the weapons in the game, and the amount of damage each weapon does seems to have been determined by pulling numbers out of a helmet. There are a handful of other minor issues and game-specific quirks, but I can see your eyes are starting to glaze over, so I’ll move on.

Mega Man 4 fixes almost every technical problem of its predecessors: you can switch weapons at just about any time, boss weaknesses have been standardized, and sprite flicker has been reduced to a rare curiosity. Also, you can now revisit the stages you’ve conquered to stock up on E-Tanks before tackling the final stages, or to be a coward and avoid the final stages altogether. Moreover, all of your weapons are now clearly labeled and more easily accessible from the overhauled menu screen—I swear, I figured out how to do my own taxes before getting the hang of MM3’s convoluted menu screen.

The weapons have also been fine-tuned to near-perfection: every weapon is useful, and even the less-creative weapons offer differences that set them apart from the weapons they’re copying. Skull Barrier damages enemies and absorbs their shots. Flash Stopper freezes all enemies and allows you to shoot them. Drill Bomb destroys certain walls and can be detonated in midair. Rain Flush damages all enemies on the screen at once and…uh…kills most of them. No matter what the situation, there’s always a weapon to help you out. Unless you’re just about to hit a floor of spikes, in which case there’s no help for you.

There’s also a little bit of a nostalgia factor going on: a few enemies are deliberately reminiscent of enemies in previous games (no, I didn’t say “uncreative ripoffs”; I said “deliberately reminiscent”); level designs very occasionally feature subtle references to previous games; and two of the songs are remixed from MM2—even if one of them is clearly inferior to the original, it’s the thought that counts. 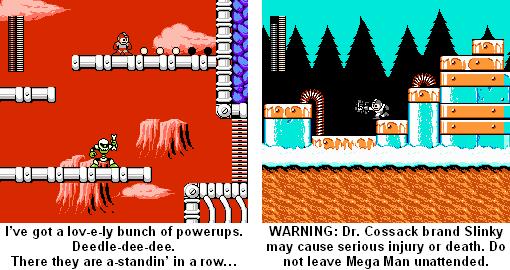 As for the rest of the music, a few of my favorite songs in the classic Mega Man series come from this game. Most of the tunes are surprisingly catchy and fairly diverse, and, like a policeman patrolling Mister Roger’s Neighborhood, have a pretty good beat. Plus, the music of the final stage culminates in this awesome “whoosh” sound, so that’s gotta count for something. There’s something about the sound quality of some tracks that might be slightly annoying to some people, but folks are more likely to complain about the whining sound of Mega Man’s charged-up blaster. However, just like listening to Zach Rich, eventually you get used to the noise and tune it out.

The other sound effects are far less obtrusive and actually quite fun, especially with the special weapons. The graphics are on par with those from the previous installments’, with perhaps just a smidge more detail and animation in certain spots. I also happen to like the robot master lineup in this one, and I don’t mind that one boss is a butt-wiggling chubby dude in a frog suit, or that another boss wears a light bulb for a hat. 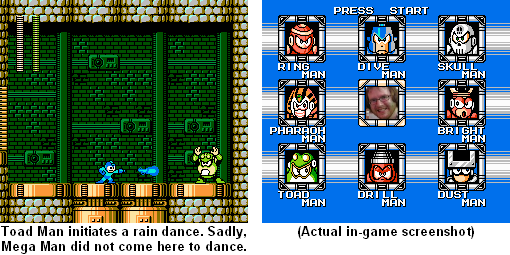 All in all, Mega Man 4 is the best game in the classic series, and my favorite Mega Man game overall. It’s more polished and balanced than the games that came before it, while the ideas are fresher and the gameplay is more refined than in most of the games that followed it. Individual aspects of other games might be better, but as a whole, no game in the original series has the perfect blend of novelty, nostalgia, solid controls, detailed graphics, good sound, technical excellence, challenge, fun, and giant hippos that Mega Man 4 has.