The plot of the game is that Proto Man, Mega Man’s brother—I’m still not sure how robots can have brothers—has turned evil and is trying to take over the world. Which would be an exciting plot if they hadn’t used it in the last three games. Seriously, you’d think Dr. Wily would realize Proto Man is a double agent1 by now, after being betrayed by him so often, but I guess Dr. Wily isn’t all that smart.

So if you’re looking for innovation, this is not the game to go to. What you’re going to see here are more like variations on the Mega Man theme, to put it poetically. To put it cynically, however, all they did was rehash the first four Mega Man games.

The main “new thing” in this game is a collection quest. You can find all the letters in MEGA MAN V, with one letter hidden in every level. Find them all to get Beat, Mega Man’s robot bird that flies in and destroys enemies in a very inefficient manner. Beat works like all the other Mega Man tools, like the Rush Coil and Rush Jet. Not the Rush Marine, though. There’s no Rush Marine in this game.

There’s some new stuff in this game, though, right? There are M tanks. Are M tanks new? M tanks refill ALL of your weapon energy, which is a LONG NEEDED item in the Mega Man series, and their appearance is welcome, even if there’s only about two of them in the game.

All that new stuff aside, this game works just like all the other Mega Man games. There are impossible jumping challenges, bosses that take six fights to beat, giant robot animals, enemies that are impossible to dodge, parts where you have to fall down but avoid landing on spikes, and a boss who hides behind a shield.

What else am I supposed to talk about? I can’t remember because I’ve reached the point where I no longer can tell the difference between any of the Mega Man games. See, I played this game as part of a Monster Mega Man Marathon, and after fifteen hours of Blue Bomber action, you’d be on Mega Man overload, too.

In Meteo’s review of Mega Man 6, he says “we try to decipher whether the series bottomed out the bell curve with Mega Man 5 or 6.” True, or not? Check out the deaths total from my Monster Mega Man Marathon:

Either I got extremely good at playing Mega Man games after ten hours, or Mega Man 5 is distinctly shorter and easier than Mega Man 4. Um…yeah. Is that a good thing, or a bad thing? I leave the choice up to you, because quite honestly, I forget.

1. You know the real reason that Severus Snape is a double agent? Because he can’t make friends with anyone on either side.2 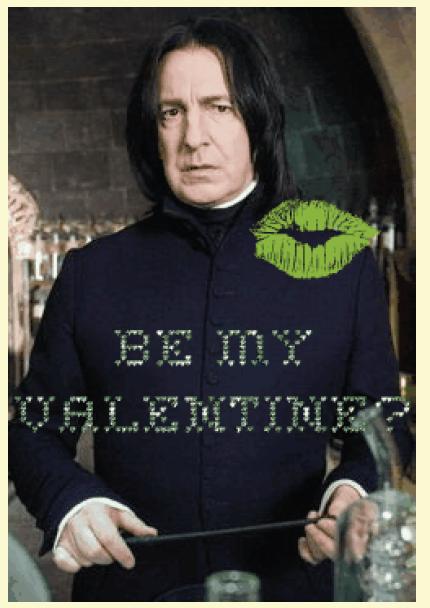 3. Snape Valentines are good and all that, but I haven’t seen any Mega Man Valentines. A Google search revealed only one: 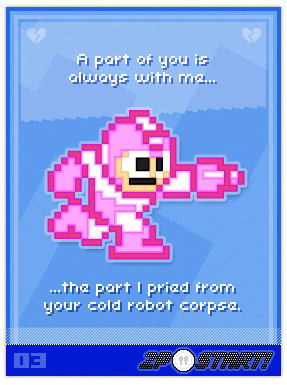 Which is kind of a disturbing Valentine to receive, if you think about it. I sure hope Paul didn’t give that one to Lizo.4

4. Speaking of Paul and Lizo,5 how long have they been going out? Four years? You know, my dad proposed to my mom after they had been going out for four years. Hint, hint, Paul. Hint, hint.

5. Speaking of GameCola romances, I understand that Sprite Monkey has started a bid with ten-to-one odds that Michael Ridgaway marries Vangie Rich6 this November.

6. The odds that Vangie Rich will break up with Michael Ridgaway and instead marry Zach Rich7 just so she doesn’t have to change her last name are forty-to-one.

7. The odds that Zach Rich will get married8 this year are surprisingly good. Two-to-one, I’m told.

8. Of course, Sprite Monkey9 assures me that the odds of Zach marrying something that’s actually alive are 5,000 to 1. Good old Sprite Monkey.

10. Well, Zach doesn’t like you. Probably because you set up betting pools on his love life.11

11. By the way, Astoria, if you’re reading this, the odds of me going out with you are zero-to-zero.12

13. Fun mathematical fact: Zero can’t be used in division. It can be used in expansion, however. That’s what the Mega Man series did! Expanded with Zero!14

14. Hey, that reminds me of another joke. Why was Mega Man 5 released by Nintendo? Because if he was released by another company, he’d be a Sega Man.15

16. I think I’ve reached the point where I have more footnotes than actual article. I’ll stop here.

The world is an emotional hellzone if you're marginalized. Especially when you gotta fight the fascists in your giant, body horror, meat mechs.