Mega Man 2 is widely regarded as the best [Mega Man / NES / video] game of all time. There’s no way to write a positive and original review when all the good adjectives have already been exhausted by other reviewers, including such popular favorites as “amazing,” “spectacular,” “astonishing,” “uncanny,” and others that are reserved for describing other things that end in “Man” or “Men.” And there’s no way to write anything remotely negative without getting deported by a mob of angry fans.

So, because you deserve better than regurgitated praise, and because I rather like it here in this country, I’m going to do my best to present a slightly objective view of a game that—aside from whatever else anyone may think of it—is an outstanding example of what a successful sequel looks like.

Mega Man 2 has just about as much plot as the first game—mad scientist Dr. Wily is trying to take over the world with robots, and it’s up to Mega Man to stop him—but the presentation of the plot makes for one of the strongest opening sequences on the NES: The plot is unraveled upon a backdrop of a cityscape, and then the camera pans up to the top of an implausibly tall tower as the music builds and builds until the heavens erupt with a flurry of awesome as we finally see our hero standing at the top with his helmet off, hair fluttering in the wind, as he surveys the world he is about to save once again.

This, boys and girls, is the stuff of heroes.

If it were just Mega Man saving the world, we’d be just fine, but because it’s you who’s controlling his actions, Capcom figured you’d be likely to screw up big time. Thus, they decided to add energy tanks to the game that you can collect to refill your health at any time, including (and especially) during boss battles, which are arguably as interesting and inventive as those in the last game. Capcom also included a password system so that you can take a break from the game, then return later to find that you’ve misplaced your password and need to start all over again anyhow.

Along with these new additions, Mega Man 2 also sports two difficulty modes, “Normal” (mislabeled as “Difficult”) and “I’m a wimpy American whose gaming skill is vastly inferior to that of a Japanese toddler” (mislabeled as “Normal”). In the watered-down version, your weapons do more damage to the bosses, and certain stage enemies become generic cannon fodder due to the loss of their special attacks. But in Soviet Difficult Mode, cannon fodder becomes you! 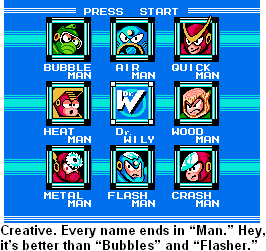 Once you’ve selected your difficulty mode (sissy), you get to choose the order in which you tackle the first round of boss stages. The original Mega Man offers six different bosses, meaning 720 unique orders in which you can fight the bosses, but with eight bosses in Mega Man 2, that means there are—y’all ready for this?—40,320 different ways to play through the game.

Of course, there are certain paths through the game that only the most mentally unstable and masochistic gamers (such as myself) would attempt—some of the stages play quite differently and are sometimes devastatingly challenging if you don’t have the right weapon or item to help you past the flocks of mechanical birds that constantly knock you off of ladders, blocks that appear and disappear over an expansive pit of lethal lava, or speedy laser beams of instant doom.

This is why I strongly urge any newcomers to Mega Man 2 to start with Quick Man’s stage. You can trust me. I write reviews on the Internet.

These weapons and special items that you collect from the bosses you defeat are more numerous and diverse than in the original, and even the few weapons that you’re likely to completely ignore can prove to be absolutely indispensable if you know where to use them. Using acquired boss weapons is one of the core components of any Mega Man game, and Mega Man 2 gives you weapons that are both worthwhile and fun to use.

Just to name a few, you’ve got a bomb that can destroy certain walls; a device that can stop time and freeze enemies in place; a platform that can crawl up walls; a tornado cannon useful for hitting enemies above you; and a seemingly infinite supply of metal gears that you can hurl in eight different directions, making you a juggernaut of infinite death—on the Improbable Scale, running out of Metal Blade ammo ranks just behind spontaneous human combustion.

There are still a few kinks to be worked out—you can’t switch weapons while any of your projectiles are still on the screen, and you can’t fire a special weapon if you’re so much as one unit short of the ammo requirement, and these can both lead to occasional frustration and/or confusion over why your buttons aren’t responding as some punk clown atop a rolling gear successfully steamrolls you.

Regardless, all of these weapons look pretty cool (no support to back up this statement; they just do), as do the rest of the visuals. Just about everything is more detailed than before, stage designs are more varied both in terms of graphics and layout (no more déjà vu before you’ve even finished the level), and enemies now come in more shapes, colors, and sizes than the cast of Sesame Street. Despite all these improvements, however, it seems not even Mega Man is powerful enough yet to topple the tyrannous Sprite Flicker.

Now, I normally don’t pay too much attention to sound effects in videogames unless they make my ears bleed at the mere mention of the game’s name, but Mega Man 2’s sound effects—and audio in general—are highly memorable (in a non-bleeding way). And each weapon, enemy, and action that makes a noise has a distinct sound that fits perfectly, from the “BLIP-bip-bip-bip-bip” of Mega Man’s teleportation to the cute “MEW! MEW! MEW!” of some enemies’ bullets.

C’mon, say them out loud. You know you want to.

But sound effects are only part of the story. Nobody else talks about the sound effects in this game. They talk about the music. They never mention that a little bit of the music sounds like it was performed by the same helium-filled birds and chipmunks who did the original Mega Man’s soundtrack, nor do they mention that Crash Man’s stage music is a little too peppy or that the reflective music just prior to the end credits doesn’t quite mesh with the rest of the soundtrack; no, they rave about the catchiest and most rockin’ tunes and then remix them to death.

Don’t get me wrong—Mega Man 2 easily has one of the best soundtracks in the classic series, if not the best—but there might actually be two or three songs that end up being the videogame equivalent of some gorgeous supermodel’s modestly attractive cousins who become better-looking by association.

…I’m so going to get deported now.

The bottom line is that Mega Man 2 is a sequel done right. It retains the best aspects of the original, improves upon them, and adds some new features to the mix without breaking anything in the process. Later games in the series might be a tad more streamlined, but they don’t resonate with gamers the way Mega Man 2 does.

Getting ahead in life is tough.