During his extensive life of gaming, Mid-Boss has had more than his fair share of disappointments. Primarily, his dissatisfaction has grown from an excess of hype or foolish enthusiasm toward games that turned out completely unworthy of the esteem forced upon them. This is usually an affliction caused by fanboys who have purchased a desperately inadequate console (e.g. a Sega Saturn) and feel the need to champion poor quality software in a meagre effort to justify their poor decision.

Accordingly, Mid-Boss has prepared a list (in no particular order) of his five biggest disappointments in gaming. He demands you read it.

Don’t get Mid-Boss wrong; what the 360 does, it does well. Unfortunately, that’s not much when the damn things keep breaking down. However, the whole Red Ring of Death problem is well documented (and lamented) elsewhere, so Mid-Boss won’t bore you with a regurgitation of that. After all, the 360 has other problems. 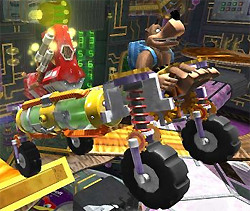 products. Where, for example, are the platform games? No, not Banjo-Kazooie: Nuts & Bolts. While it’s a good game, it’s demonstrably not a platformer. In fact, that’s a real point of contention for Mid-Boss—remember that first teaser trailer, in which Banjo and Kazooie break through a locked door to reveal a newly-rendered Spiral Mountain, complete with note clusters, Jiggies, and, most importantly, platforms? What the hell happened to that game!? As excellent as Nuts & Bolts is, I think everyone would rather have had a proper Banjo 3, if only to give the 360 a proper HD platformer.

If you want to shoot things and drive cars, then the 360 is for you. There are stacks of great titles available—Gears of War, Mirror’s Edge, Forza 2, Call of Duty 4, Rainbow Six Vegas, Resident Evil 5, Left 4 Dead, The Orange Box…the list goes on and on. It’s that devastating lack of variety that disappoints Mid-Boss and keeps him from buying a 360 for himself. After all, the PS3 has Ratchet & Clank, LittleBigPlanet….

Mid-Boss was physically shaking with anticipation for this title and warmly recalls the initial feeling of euphoria he experienced upon encountering the prologue stage’s boss battle for the first time. Good God, they’ve nailed it he thought, as the enormous mechanical monstrosity unexpectedly launched into view and seized the Gunstar’s ride home between its enormous pneumatic fists with a satisfying “k-chank.” That was exactly what the original Gunstar Heroes was all about: daunting opponents, and outrageous surprises. Up until this point, the belated sequel Gunstar Future Heroes appeared to be doing its predecessor justice. It’s only when this boss falls that the disappointment starts. Five seconds later.

You see, Gunstar Future Heroes is exceptionally basic. Insultingly so. It shovels (admittedly hugely impressive) flashy effects and options into your

face, none of which are necessary and all of which serve as blinders to the sheer monotonous drag of thegameplay. Everything is recycled—it’s a remake, only much worse. Stages last literally seconds. Your Gunstar has incredible flexibility in his or her firing style—you can use the free or fixed shot of the original as well as fire in one direction while moving in another—but you never need to because every boss falls to a simple volley of powered-up attacks. Yes, double-tapping the R button unleashes an enormous cannon of flame, which does devastating harm at a ridiculously high speed. To gain energy for this weapon, you have to defeat or damage enemies. Naturally, this means that it can be used in an almost unlimited capacity against bosses, as you will regain weapon energy faster than you lose it. It’s ridiculous and strips all the balance out of a game that once thrived upon it.

Worst of all, though, is the removal of the two-player co-op mode. Nonsensically, Treasure saw fit to take out the most enjoyable feature of the original and add nothing to compensate for it. Even the throw attack is gone, for Christ’s sake.

As a result of this (let’s face it) rape of the Gunstar franchise, Future Heroes was a vast disappointment to fans who, in Treasure’s defence, probably expected the world. After all, how could they meet the expectations of those raised on the greatest run ’n’ gun game of all time?

Filthy, lying Sega fans informed Mid-Boss that NiGHTS was the Saturn’s “killer app.” God knows it needed one; the poor thing died on its feet against the might of Sony’s PlayStation. As the Saturn is home to many wonderful niche games (Radiant Silvergun, Street Fighter Zero 3, Guardian Heroes, Twinkle Star Sprites, Clockwork Knight, Virtual On, Fighting Vipers, etc.), Mid-Boss jumped at the chance to finally play NiGHTS into Dreams when one of his store’s customers traded the game in with a Saturn. Upon booting up the game, the first thing that struck Mid-Boss was that it was played resolutely in 2D. Of course, this is no criticism, but every screenshot Mid-Boss had seen of the game led him to believe that NiGHTS was a fully 3D romp, guiding the eponymous hero through the skies in total freedom.

Shockingly, the game that so many Saturn apologists had enthused over as a Mario 64 beater (I’m looking at you, UK-based nineties games magazine Sega Power) turned out to be a worryingly pedestrian “fly through rings” game, much like the tutorial of Lylat Wars, only worse to look at and play. Why, exactly, did NiGHTS ship with an analogue controller? Truly one of the most overrated games of all time, NiGHTS is nothing more than a half-baked tech demo masquerading as a curio in order to attract the gullible. Indeed, Mid-Boss could have filled this list with Sonic Team games had he been inclined. Mid-Boss does as he pleases. Nobody dares question him.

Let’s get this straight—Mid-Boss’ disdain for Mega Man 9 has absolutely nothing to do with the return to 8-bit. In fact, Mid-Boss found it rather pleasing that they took that route, as it opens up future developers to do the same, resurrecting old franchises or taking them back where they belong.

Conversely, Mid-Boss’ disappointment largely stems from the decision to go as far back as Mega Man 2 for graphical inspiration, resulting it poor backgrounds, spartan-looking enemies, and a general lack of moves from the offset. The fact that Mega Man 9 isn’t even as good as the worst of the original NES games (Mega Man 4, if you’re asking) is the real bugbear. The levels are uninspired, almost entirely consisting of recycled assets. While back in the NES days that was nothing new, it has been fifteen years since Mega Man 6, the then-final 8-bit entry. Developer Inti Creates had all that time to come up with new obstacles and still failed. Nostalgia alone isn’t enough to sell a game to Mid-Boss. Must try harder.

5) The Lack of a Classic Disney Games Collection

Come on, developers and licensees. Sort out all that legal mumbo jumbo and let’s have a collection with all those fantastic Disney licensed games from the 8- and 16-bit generations. Mid-Boss would pay top dollar for a collection with Castle of Illusion (and sequels), Mickey’s Magical Quest (and sequels), NES DuckTales (and sequel), Aladdin, Rescue Rangers (and sequel), Darkwing Duck…the list goes on. Sort it out, lads, or Mid-Boss is coming over to bust some heads.

Take a moment to appreciate the music of Hitoshi Sakimoto.