(Editor’s note: This article was originally published in the June 2009 issue of GameCola, back when GameCola was published in a monthly online magazine format.)

In these Tough Economic Times, there is one thing that you, the GameCola fan, know you can have absolute faith in: GameCola itself. You could lose your job any day now, and you probably won’t be able to make this month’s rent, let alone afford the Amazon-exclusive Slimer edition of Ghostbusters: The Video Game; but you know that, at the beginning of every month, you can visit GameCola.net, and there will be dozens of brand-new and hilarious videogame articles waiting, eyes wide and hands shaking in anticipation, for your love and attention. It’s been like that ever since April of 2002, when we published our first issue, and it will surely—surely—be like that for many, many more years to come.

Tune in to my “Dear Readers” column next month for a world-shattering announcement about the future of GameCola.

In the meantime, join me, right here and right now, in Part 3 of our ongoing discussion of stupid things developers do that ruin their otherwise awesome games! I’m assuming you’ll be exited about this, because you rated Part 1 a 9/10, and Part 2 an 8.25/10. Thanks, guys! You’re all peaches.1

In Part 3 this month, we’re going to talk about the videogame series that spawned GameCola’s Game of the Year for 2004: .hack.

.hack is a series of PS2 action-RPGs in which you play as a kid playing an MMO online with a bunch of other people. It’s like WoW, except you’re playing with people who literally don’t have a life, instead of figuratively.2Your best friend went into a coma after playing this game, called The World, and now you’re playing it yourself to figure out what happened. That’s not nearly all there is to the game, but it’s all you need to know for my forthcoming rant to make sense.

The crux of my forthcoming rant is this: The game makes it very difficult for me to believe that these characters are controlled by actual people, because they do things that no actual person would ever do. This, in turn, means that I can’t believe what’s happening in the game or, thus, really get sucked into it, because the characters contradict the universal laws that the game itself sets.

In other words, when you’re playing .hack, you’re constantly reminded that you’re playing a game, instead of trying to save your best friend from a coma.

(That’s basically all I’m going to say for the next six paragraphs, so if you’re a teal dear, feel free to skip down to my preview of this issue.)

One problem is that your party members never heal themselves on their own; you always have to tell them to heal before they actually do it. They’ll actually let themselves be killed rather than take the initiative to down a potion. Now, my total experience with MMOs consists of an hour spent shooting chicken farmers with Captain Eric in WoW, so, for all I know, this is actually how they work. Maybe party members have so much faith in their leaders that they unfailingly only do exactly what they’re told to do. If that’s not how they work, I can at least accept that it could be how one might work. It’s within the realm of possibilities, even if it seems totally bizarre.

What really breaks the game, though, is the fact that your party members never, ever, ever upgrade their equipment on their own, to the point where they could potentially reach the highest level of the game while still attacking with a level 1 stick. The only way they ever get new equipment is if you give it to them. In real life, it is completely impossible that anyone ever could, let alone would, play through an MMO without ever once upgrading their equipment on their own, unless the MMO is really easy, and you’re into starting-equipment-only challenges. (Which isn’t the case for your party members in this game, as they willingly and gratefully accept any new equipment you give them.)

I understand why the game does it. Part of the reason is that it’s an RPG, so it’s up to you, as the leader of the party, to upgrade everyone’s equipment, just as you’d do in any other RPG. (This is also probably why party members don’t heal themselves—that’s your job.)3 Another part is that some of the gameplay involves building relationships with your party members. (Yes, it’s one of those games.) The more you use specific party members, and the more you give them equipment, the more they start to like you, and the more they e-mail you about how much they like burgers. Which I actually enjoyed—things like e-mails and message board posts, which do make the universe seem real, are mostly what’ve kept me playing. 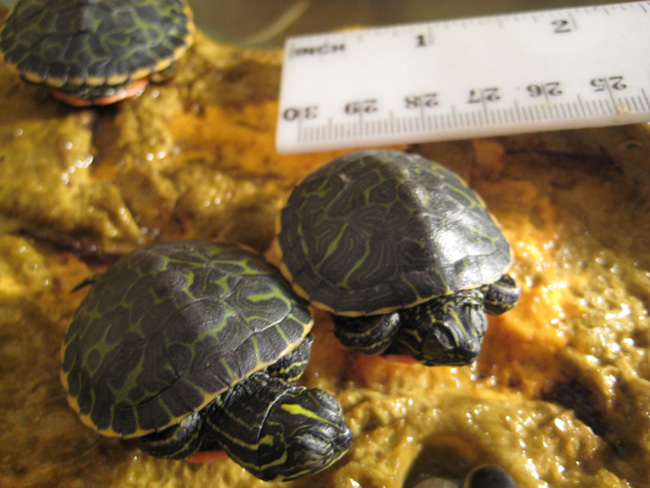 I’m putting this picture of baby turtles here, because I need something to break up this Wall of Text, and screenshots of .hack are boring-looking.

And the game even almost justifies it. When you’re crawling The World’s dungeons, your character, apparently kind of a jerk, grabs every single piece of loot. The other characters just walk by it, often saying things like, “No, go ahead, you should take everything” or, “If it’s cool, give it to me!”4 Since you’re takingeverything, that means they’re not getting new equipment, or gold to purchase new equipment. But the game doesn’t take it far enough. These characters don’t play the game exclusively with you; they, apparently, play the game by themselves or with other people. You can tell this because they sometimes gain levels when you haven’t been using them, which gives them plenty of opportunity to buy new equipment, unless every single one of your party members only plays the game with loot-hogs, and never by themselves.

Now, you might be typing out an angry comment to the effect of “Paul, this is a PS2 game—asking the AI to be deep enough to buy its own equipment is asking too much.”5 I don’t know if I believe that, since the PS2 isn’t exactly a puny machine; but, if that’s the case, then the developers need to explain why your party members don’t ever buy their own equipment, because, otherwise, it doesn’t make any sense. The most obvious thing they could’ve done was make it clear that your party members never play the game without you; that way, it’s obvious that they can’t buy their own equipment, since you always steal all of the goddamm loot. Easy fix, though, if the characters aren’t leveling up on their own, then you’ll have to take the time to do it yourself, or go into battle with under-leveled party members, which is probably what the developers were trying to avoid. Also, you’d run into issues later in the series, when you’re joining up with level 30 people for the first time—you couldn’t just say that, after playing The World for months without you, they’ve all the sudden started playing exclusively with you. Or, I guess you could, but then you’d have to come up with an explanation for that, too. It’d still make more sense than nobody in the entire game ever buying equipment but you, though.

So that’s my big issue with .hack. Is anybody with me on this? No? You all think I’m thinking about this way too much? You all skipped this entire section of my article, except for the baby turtles? Too bad—that means you missed the part where I secretly detailed my upcoming announcement about GameCola.

And so ends Part 3 of this way-too-long discussion! Stay tuned for Part 4, coming some day to a GameCola near you, in which I rapid-firely discuss the remaining 11 or so games on my list.

While you’re hitting refresh on our main page, waiting to see what the big announcement is, why not read the new issue? Here are some of the highlights:

2. Don’t be offended—I’m not talking about you. I’m talking about the people who, during WoW‘s recent Easter celebration, actually camped beside bushes for hours waiting for Easter eggs to respawn.

4. Neither of which are things I would be saying if some jerk was taking all the loot.

5. Well, OK, you probably didn’t use an em dash in your comment—nobody uses em dashes.

6. He doesn’t come right out and say it, but pay attention to which topic gets him the most excited.

To get the bitter taste of the worst thing that has ever happened to anyone out of your mouth, I've got something that's pretty much the opposite of that: Phoenix Wright, the musical. No, not that mus