Reviews of Flash animations and games.

Duels to the death are dangerous.

Oh, I’m not talking about real-life duels, like the one between Alexander Hamilton and Aaron Burr—the worst that could happen there is that somebody might get killed. No, I’m talking about duels to the death featured in Flash games and videos that could—::gasp::—make a mockery of your favorite videogame and incite unbridled fanboy/fangirl rage over the outcome.

“Who would win in a fight—Jigglypuff or Solid Snake?” Such arguments have raged for centuries. While games such as Super Smash Bros. allow gamers to settle these disputes the correct way—with violence instead of words—some Flash animators have taken it upon themselves to show you who would win in a fight.

Some Flash duels are thrilling, unpredictable, funny, and highly creative; some just make you angry when your favorite character dies a pathetic death at the hands of an opponent you know is inferior. Some Flash duels, regardless of who wins, are just plain bad—try not to watch these.

Don’t risk going into a Flash duel unprepared. See what “Flash Flood” has to say about it first. I mean, I don’t watch or play anything on the Internet anymore until I’ve heard about it from “Flash Flood.”

Think about that one for a moment.

Here’s a handy-dandy guide to how I objectively rate everything:

1 = Not worth your time. Like watching Wario eat Kirby. Wait; actually, that has comedic potential, so scratch that.

0 = Painful. Like watching Gordon Freeman pry out your eyes with his crowbar. In person.

Between all the reviews and the videos on our YouTube channel, GameCola has been inundated with Mega Man for over half a year now. Some people (read: Nathaniel) want more. Some people (read: everyone else) want no more. This conflict is the source of inspiration for this edition of Flash Flood.

This month’s theme: Mega Man versus everyone else.

Description: Play through a condensed version of Ghosts ‘n Goblins (NES) as Mega Man, and face off against the game’s hero, Arthur, at the end.

Review: A completely unnecessary crossover, to be sure, but a fun one. Mega Man handles exactly as he does in Mega Man 5 and 6, and while not every screen is 100% accurate to the original game, the whole endeavor is a very faithful recreation of Ghosts ‘n Goblins, except for one critical difference: it’s actually possible to beat this game.

Description: Ryu from Super Street Fighter II gets into a fight with Mega Man X, and… You know what? It’ll take me longer to write a description than it will for you to watch the video, so forget it.

Review: It’s short, it’s pointless, and… You know what else? It made me laugh. Review over.

Verdict: 4/5: Admittedly, I could have laughed harder.

Description: A somewhat bloody, no-holds-barred duel to the death between Link and Zero.

Review: Zero is from the Mega Man X games, so this totally goes along with the theme of “Mega Man versus everyone.” Some of the action is very cool, but there’s a notable lack of sound effects, and the video eventually takes a turn from “cool fight between two cool guys” to “underdog hero getting revenge against the bad guy,” which is not cool if the hero you were rooting for turns into the bad guy. 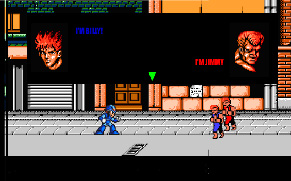 Description: Zero sends Mega Man X on random missions that get him entangled with the stars of other videogames. Carnage and comedy inevitably ensue.

Review: The series is a little crude, both in terms of content and editing quality, but there’s a visible improvement in quality with each installment. Which is more than I can say for my own work. (It’s hard to improve upon perfection, eh wot?) The first video is fairly weak, the second is worth watching for the ending alone, the third is hilarious, and the fourth is just funny enough to warrant a viewing. If nothing else, I like them more than the somewhat similar Megaman Adventures video series, which I only mention because the fourth video features Metal Slug.

Verdict: 4/5: I should really give these videos a collective 3/5, but I’m still laughing at those second and third videos. See? Now you’re curious.

Description: Play through a condensed version of Metroid (NES) as Mega Man, and face off against the game’s hero, Samus Aran, at the end.

Review: The question of whether Mega Man or Samus would win in a fight has long been hotly debated. I say “hotly” because I set people on fire if they answer “Samus.”

In stark contrast to EVERYTHING ELSE ON THE INTERNET, Mega Man and Samus are EVENLY MATCHED in this game, and it is your skill alone that decides who will win, not the fact that EVERY FORUM GOER AND FANFICTION WRITER CONVENIENTLY FORGETS THAT MEGA MAN HAS ENERGY TANKS AND MORE WEAPONS THAN SAMUS. THANK YOU.

Verdict: 4/5: Did I mention you can ultimately play as Proto Man? This game and Megaman vs Ghosts&Goblins are linked, so there are some goodies if you play both games.

Mega Man gets dragged into more Flash duels than most other videogame heroes out there; it’s only a matter of time until he crosses paths with your favorite characters, if he hasn’t done so already. Personally, I can’t wait to see Mega Man vs. Paperboy and Nintendogs: Rush & Friends. Oh, the possibilities!

Really, now. Paris Hilton has been licensed to appear in a videogame? "Wow, this has got to be abysmal at best," I thought. But you shouldn't run entirely on first impressions, for Paris Hilton's Dia