Arkanoid. Namco’s spiritual successor to Atari’s Breakout and Super Breakout. The goal of the game is to bounce a ball off of a paddle, and by doing so, destroy all the blocks in a single level. There were powerups, a welcome addition in Arkanoid, that tipped the scales either in or against your favor.  Like all classic arcade games, it has been imitated thousands of times, with plenty of commercial sequels, spin-offs and rip-offs.

The Microsoft Excel version of Arkanoid.

One such rip-off is the “for-some-reason-it’s-fun-but-you’re-not-sure-why them up,” Hyperballoid HD. Now don’t get me wrong, it is an absolutely fabulous game, but it’s just Arkanoid, all over again.  Reviewing this game is going to be difficult, because once you know it is just Arkanoid with bells and whistles, then the rest is self explanatory.

Making a Breakout-clone in this day and age is unfathomable—not to mention, two others already exist on the PlayStation 3 to begin with, plus a PlayStation Minis game based upon Breakout. When you’ve played one Breakout, you’ve played them all, but I’ll see what I can do.

Ball-breaker. Brick-buster. Terrible-game. Whatever you know it as, you definitely have come across it before—as much a staple of the gaming industry as Pac-Man, Centipede or Space Math.

Destroy the bricks, with the ball. But Hyperballoid HD does try to make things easier, and will let you continue to the next level even if you haven’t destroyed everything. There are also unique special powers, such as the remote explosives and the lightening, that expand the gameplay. Plus there are many different block types and stages that contain animation, further strengthening the game’s similarity to Peggle.

I hate Peggle. At least, unlike Peggle, a certain amount of thinking can be employed when you’re playing Hyperballoid, and a lot more skill is required. But succeeding in Hyperballoid still relies very much on you being lucky, which does not a fair game make.

As I mentioned barely a moment ago, you don’t have to destroy every block in order to progress—and this is very welcome, because we’ve all been there. We’ve all waited for that last block to be hit by the ball.  Once only a few bricks remain, you are able to skip the rest of the level. It counts as completing the level, and it is not a loser’s way out, OK? I’m not a loser. But what Hyperballoid considers “a few bricks” is not what I consider a “few bricks.” 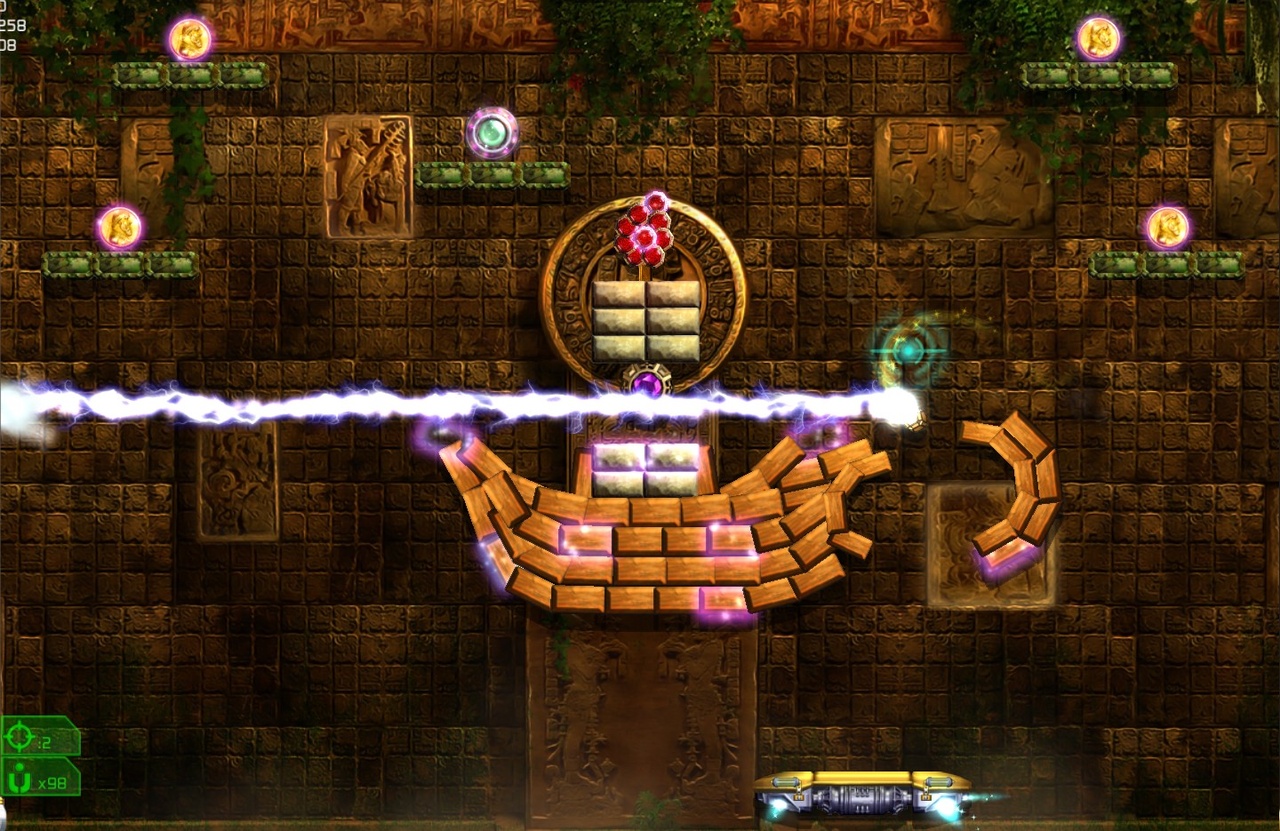 Hyperballoid HD. It gets the visuals right; this screenshot does not do it any justice.

And speaking of silly, there is a most outrageous glitch with the custom soundtracks. If you return to the title screen while using the feature, the music becomes incredibly loud and distorted. When I’m trying to play games at 3 a.m. while everyone else is sleeping, I don’t want to wake them with Atomic Kitten blurting out at fifteen times it’s natural volume.

Although I felt the need to drown out the in-game music for the “Ancient World” campaign (with the musical offerings of popstars dressed as schoolgirls), the music for the “Planets World” campaign is actually quite pleasant. This saves the audio from a below average score, just because I’m feeling a little generous today. Maybe my generosity stems from the new site finally being ready for all you hoobs out there, or maybe because I got a full name mention in Paul’s welcoming speech. We’ll never know.

Hyperballoid HD is a very large game, consisting of one hundred levels, all of which are exactly the same thing, more or less. You’re probably used to this if you’ve played my least favorite game, Peggle.

The game is split into two campaigns, Ancient World and Planets World. Ancient World is the most visually impressive campaign, with very high quality photorealistic backdrops and marvelous lighting effects. Meanwhile, the Planets World campaign is like stabbing yourself in the retina. Not only is it painful to look at, but it is a constant flashing experience, with bright lights and special effects, which just seem entirely over the top.

Nevertheless, the Ancient World campaign is impressive, and not just visually. The levels within the campaign appear to be very well thought out, based on various events in history, and then some. To draw comparison, the levels in the Planets World campaign seem to have been thought up during a lunch-break, drawing upon the uncreative sourcing of the zodiac for inspiration.

And inspiring, this game isn’t. But it doesn’t set out to be. It sets out to be quantity over quality.

Like when your mother makes a stew, and there is far too much. You find that even if you gorged yourself to your limit, there would still be some left over. That is what Hyperballoid HD is like. 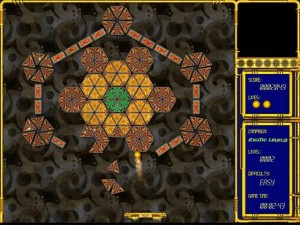 Here is a screenshot of the original Hyperballoid, which is the same old shit, without a HD facelift.

Hyperballoid HD feels like it never reached the Quality Assurance department—yet, for what you pay, I don’t think that really matters.

With other titles on the PSN that shove themselves in your face, dying for attention, it is hard to justify buying Hyperballoid HD. But remember, the price doesn’t always indicate the quality—after all, Dark Mist is dull, and costs a vast sum more. Hyperballoid also contains “achievements” (as the website clearly states), which help toward your Trophy count and make you look like a better gamer, if cred is all that matters to you.

In the long run, if you played gradually (a few levels a day), you’d get a long shelf-life out of this game. However, if you rush it, you will not only become very bored, but you will complete the game in two days flat, and you will have no incentive to play more.

If you take your time, and savor it, it is definately much better than Peggle.

I should totally review Peggle.

Note: This review is of the European version of this game, which was released in December 2009. As of the publishing of this review, the date for the U.S. release has not yet been announced.