The awesomely-acronymed Tales of Monkey Island: Lair of the Leviathan is—if you haven’t been paying attention to the adventure games scene, videogame news in general, or GameCola.net—the third in a five-game series of episodic Monkey Island titles. You point, you click, you solve puzzles, and you laugh. That’s pretty much the sum of things. For more information on the gameplay, and on my old fogey view on point-and-click adventures, check out my reviews of the first two games.

TMI: LoL picks up where the second episode left off, with main character Guybrush Threepwood, his ship, and his would-be assassin being swallowed by a giant manatee. There’s a brief recap at the beginning of the game to remind you of The Story So Far, and then you’re plunged right into your quest to first escape the beast, then link-up with your fiancée, and then locate the magical sponge that will cleanse the word of the disease you yourself unleashed upon it. (Throughout the game, if you forget what you’re doing or what’s going on, there’s a summary of the game’s events on the save screen. Nice touch.) In this game, you get to meet new characters, some of whom are horribly outdated stereotypes, such as a nerd with taped-up glasses, or a laid-back surfer dude who just wants to chill, man. You also get to spend some time with a beloved character from the older, pre-Telltale Monkey Island games, and you get to solve TWO puzzles that appear to be descendants of classic MI insult sword-fighting. It’s pretty awesome.

This is not gameplay footage of TMI: LoL. I just like manatees.

Telltale, if you couldn’t guess by the fact that we gave TMI four awards in our year-end awards, is doing a fantastic job with the Monkey Island license. They’ve got the dialogue down, they’ve got the humor down, and they’ve got the number one voice actor of all time reprising his role as Guybrush (and even stepping up his “game” in this game, which shocked me, because I didn’t see how he could get any better). Also, TMI’s music composer deserves a medal, as does the guy who does the backgrounds, for their great work in these games. (But not the guy who does the character models. He deserves a demerit in his permanent record for turning Guybrush into the World’s Ugliest Hero.)

Their puzzles, for the most part, have a solid difficulty balance, though a few in this game are a little iffy. For some reason, the middle chunk of this game is rife with kind-of contrived puzzles. I know it’s weird to be complaining about something being “contrived” in a game where the only way you can advance is by stealing every item you possibly can, and then putting them all in your pants, but too many of these puzzles had me asking questions like “why can I only click certain parts of the bile?”, or “how did that end up inside a treasure chest inside this gigantic manatee?”. And the answer was always the same: because it helps the story along, so it doesn’t matter if it actually makes any sense or not. I feel like more could have been done to achieve a little more internal consistency, but that might just be my tendency to pick nits.

Nevertheless, for the most part, the puzzles are fun in a challenging but not an oh-my-god-I’m-going-to-rip-my-fingers-off kind of way. Like I said in an earlier review, the best way to play these games is with a friend, or with a lovey dovey. I’ve been having a lot of fun playing these games with my own lovey dovey; whenever her eyes light up and she gets a funny smile on her face, it means she’s just figured out the ridiculous answer to a ridiculous puzzle that we’ve been having trouble understanding, and it makes us both very excited. (Because we are huge nerds.) After my experience with these games so far, I think the only way I can play an adventure game now is with someone else; it’s a waste of a super-fun time to play them by yourself. 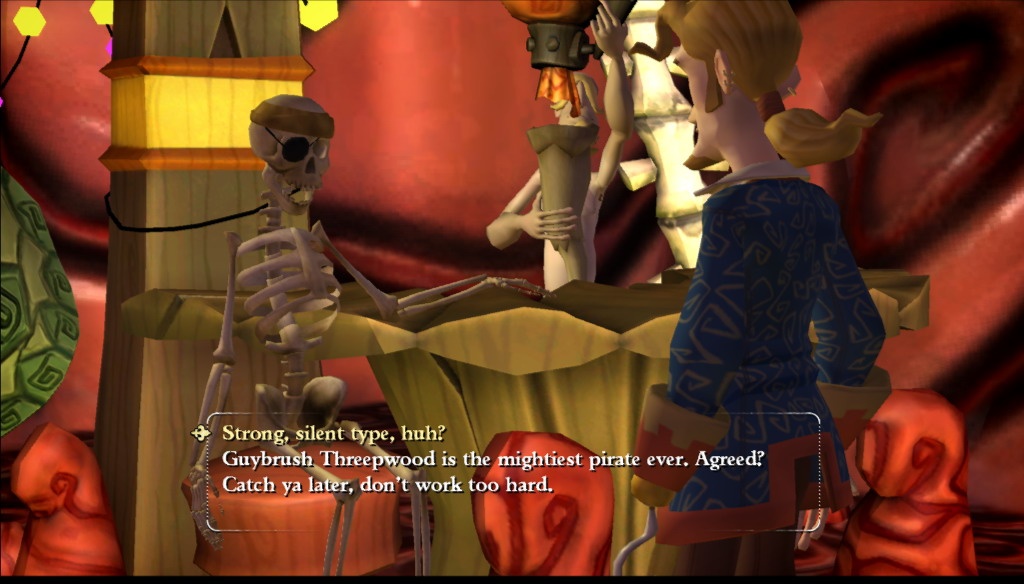 Telltale is also doing something with the MI series that’s never been done before—they’re actually making the player care about the story and, in particular, the relationships between the characters. The Monkey Island series has never been particularly story-driven, by which I mean the individual games are only just barely coherent as a series, as anyone who’s tried to understand the link between the end of the second game and the beginning of the third game can attest to. What Telltale has been doing with this series, though, is playing with the relationships between Guybrush, Elaine, and two other main characters, setting up a sort of love square that makes the player actually question whether Guybrush and Elaine should be together at all. (This sounds a lot more exciting, and a lot less Days of our Lives, if you’re an MI fan.) For once, a Monkey Island game is not only comedic, but it’s also intriguing; you’re not only laughing at Guybrush, and the way he throws like a total girl, but you’re actually getting into the story. This is brand-new territory for this series.

However, good storytelling isn’t the only thing Telltale has been introducing to Monkey Island. With this game in particular, they’ve also introduced: potty humor. It’s only in one instance, but it’s there, sticking out like Quest 64 in a collection of good games. I don’t expect my Monkey Island to be serious business—the games are intentionally silly, and that’s one of their main selling points. But there’s silly, and then there’s feeding laxative to a giant manatee so he can poop you out into the ocean. (Spoiler alert.) Not only is it lowest-common-denominator humor, but it feels totally out of place in an otherwise silly but not “huh huh you said ‘wood’” series of games.

But back to things I like. Another aspect I’ve been enjoying is this series’ borderline self-referential dialogue. The games haven’t been going overboard and having Guybrush very obviously imply that he knows he’s a character in an adventure game, but they do things like referencing the fact that Guybrush spends so much of his time solving puzzles, which not only comes across as funny, but also makes the puzzle-solving itself seem more a part of the actual storyline, as opposed to something that happens mostly independent of the story. Moreover, this game, just like the one before it, features one of my new all-time favorite puzzles—one that I’m a little upset I solved as quickly as I did, because I think I missed out on a lot of great dialogue.

Nevertheless, I’m inclined to say that, of the first three Telltale MI games, this is probably the weakest, due to the contrived-ness of many of the game’s other puzzles and situations. It doesn’t help that they haven’t fixed the game’s controls yet, either, which have been an epic problem since Game One. I talked about them before, and I’m not going to keep bringing them up, but I have one more thing I want to add: I’m now actively trying to subvert the controls while playing the game. I’m relying as little as possible on the controls as Telltale wants me to use them—that is, clicking randomly on the screen and then dragging Guybrush in the direction I’d like him to take. I’ve noticed that, if I click on an item in a room, Guybrush starts walking toward that item; so, if you’re lucky, you can navigate entire rooms just by hunting down items and clicking on them. I mention this because I think it’s kind of a problem that players are having to subvert the game’s control scheme like this. Doesn’t that mean something’s wrong? 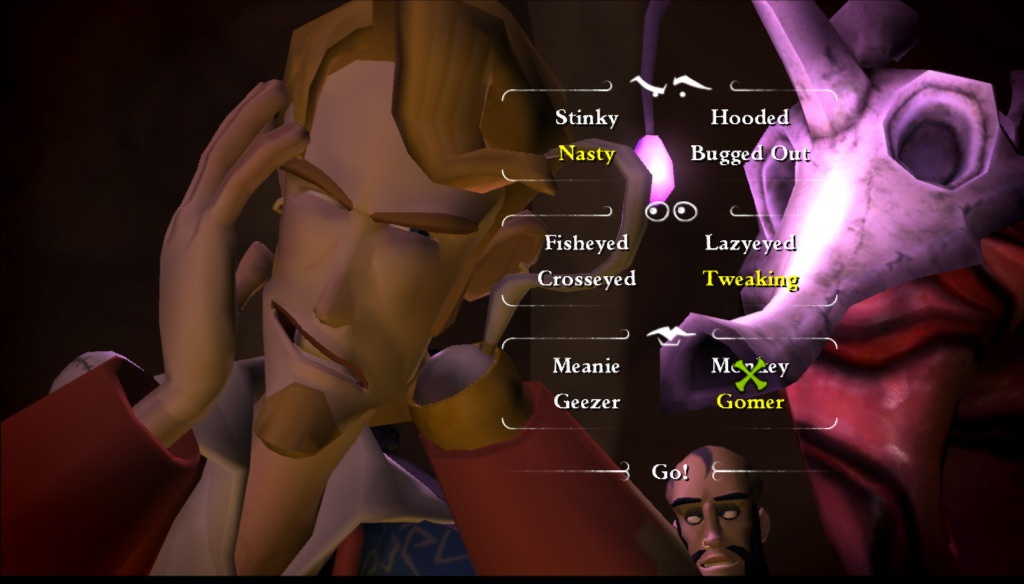 Since I keep whining about the controls in these games, here’s one thing I like about the controls: You can click to skip through dialogue. This is super-helpful in a game where you can, whether by accident or not, hear the same dialogue over, and over, and over again in clicking on objects or people that you’ve already clicked on before in trying to solve a puzzle. I don’t think I could handle it if I had to hear Guybrush say “I don’t think I want to do that” every. single. time I tried a solution that seems totally logical to me, but that the game doesn’t agree with.

If you enjoyed the first two games—and you can take off your critic hat—you absolutely should continue with this series. It’s got everything you want out of a Monkey Island title. It’s short, but that just means you can play through it in one sitting—perhaps with your lovey dovey, when it’s raining outside, and you have candles lit all around your computer, and…anyway. Good game!

Fallout 3 comes out at the end of the month, and I'm filled with restrained hope. I love Fallout and Fallout 2. LOVE THEM. They were my first PC games and what inspired me to continue gaming on the pl