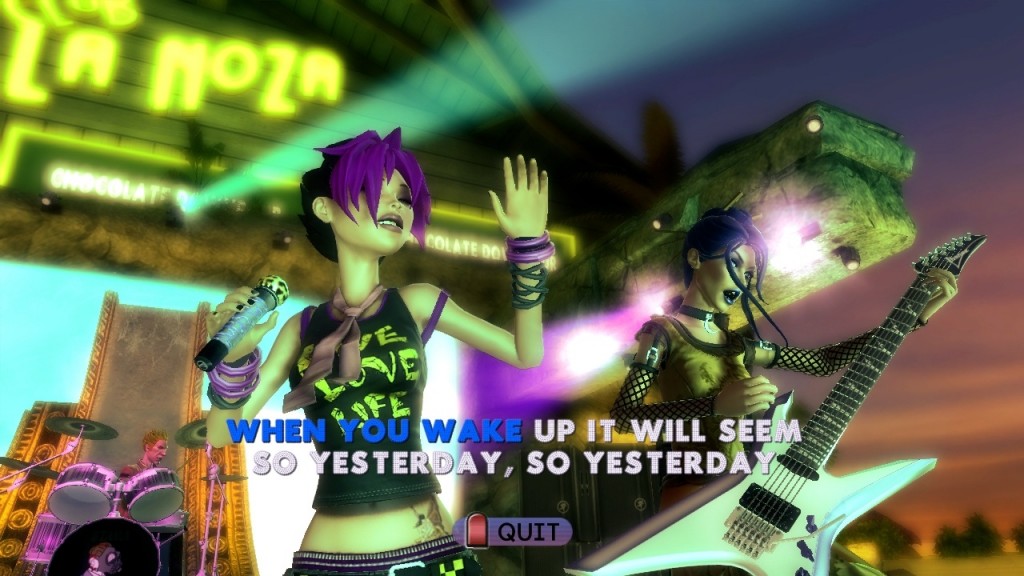 Just to explain, Band Hero is Guitar Hero for kids; everything offensive has been removed in what I like to call the “Don’t Offend The Serious Christians” edition of Guitar Hero.

In case you aren’t aware, Band Hero is a reskinned Guitar Hero 5. However, when it comes to the songs, this is pretty much the best Guitar Hero released to date. There are no unheard of indie bands. Well, OK, there are a few odd choices, but you generally know everything in this game. It is like Now That’s What I Call Music, except without Lady Gaga and Tinchy Stryder.

Thankfully, Band Hero not only feels like it is separate from Guitar Hero by just the soundtrack alone, but also by the gameplay and art direction. The whole atmosphere of Band Hero is very different. I think the phrase is “Everyone 10+”.

Sadly, in broadening their audience, Neversoft decided to do away with any words that might be considered offensive. “Fair does,” I thought, “there won’t be any references to sex. Got it.”

But censoring gun would make perfect sense, if it wasn’t for the inclusion of .44 in N.E.R.D’s “Rock Star.” .44 is, of course, the nickname for my favourite handheld weapon, the Remington Magnum. So they’re not allowed to say gun, but saying the nickname for a gun is fine?

Well then, surely any nicknames for sex will be fine. Well, no.

Take for instance, Fall Out Boy’s “Sugar, We’re Going Down.” Of course, worth note is his “loaded God complex” in the lyrics, which isn’t censored at all, although it is a play-on-words concerning a gun.

Anyway, I’d like to draw your attention to “notch in your bedpost,” which is surprisingly missing from this game. Can someone introduce me to a ten-year-old who actually knows what this means? I had to be told what it meant before I could even comprehend why it was missing from the game.

Hell, why did they have to censor “whiskey” in “American Pie”?

…wait, “American Pie”!? Don McLean’s “American Pie”? With the pie, and the Americans, and, you know, the togetherness? All eight minutes and thirty three seconds of it?

Aye, “American Pie” is the credits song in Band Hero. All eight minutes and thirty three seconds of it. And speaking of odd song choices, I’d like to direct you to “Wannabe” by the Spice Girls. Playing piano is something I’ve wished for in a Guitar Hero game for so long.

So straight off the cuff, Guitar Hero Kids, as it were. 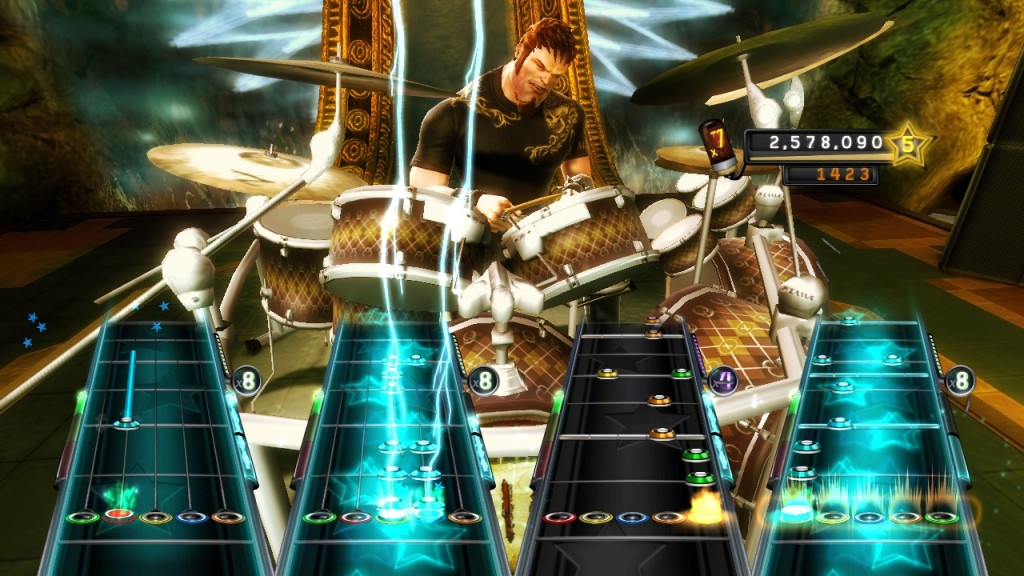 Band Hero is definitely far more beautiful than Guitar Hero 5. But it is still Guitar Hero 5, so instead of copy-pasting the entirety of the review for that game, I’ll just spend a little more time explaining why Band Hero is both awesome and superior to its relative.

Like two sisters who are inseparable, Band Hero has exactly the same system as Guitar Hero 5. There are a multitude of multiplayer modes for you to play multiple times, which should multiply the replayability factor. My favourite multiplayer mode (not present in the “World Tour era”) ranks players not on how well they score, but on how many notes they hit in each section of the song, which I believe is a much fairer method of competition.

The career mode has 5 Stars per song, instrument-specific challenges where another 3 Stars can be earned, and an extra Star awarded for a full combo (which means not only 100% notes hit, but also no overstrumming). That makes a total of 9 Stars per song. Challenges cannot be played on Beginner, but running a song twice (once for a Beginner Full Combo, and once for a 3 Star Challenge on Expert) will net you the full 9 Stars in each song.

Collecting Stars is what allows you to progress through your career, unlocking new venues and challenges. Completing The Mighty Mighty Bosstones’ “Impression That I Get” whilst performing in space finishes the career mode (yes, in outer space!). The game can be beaten in a day, if you’re not capable of pacing yourself, but the collection of 555 Stars will take you much, much longer.

So far, Band Hero seems like the obvious game to choose if you’re new to Guitar Hero. It is family friendly, looks stunning, has a stellar setlist and has a 495G Achievement. 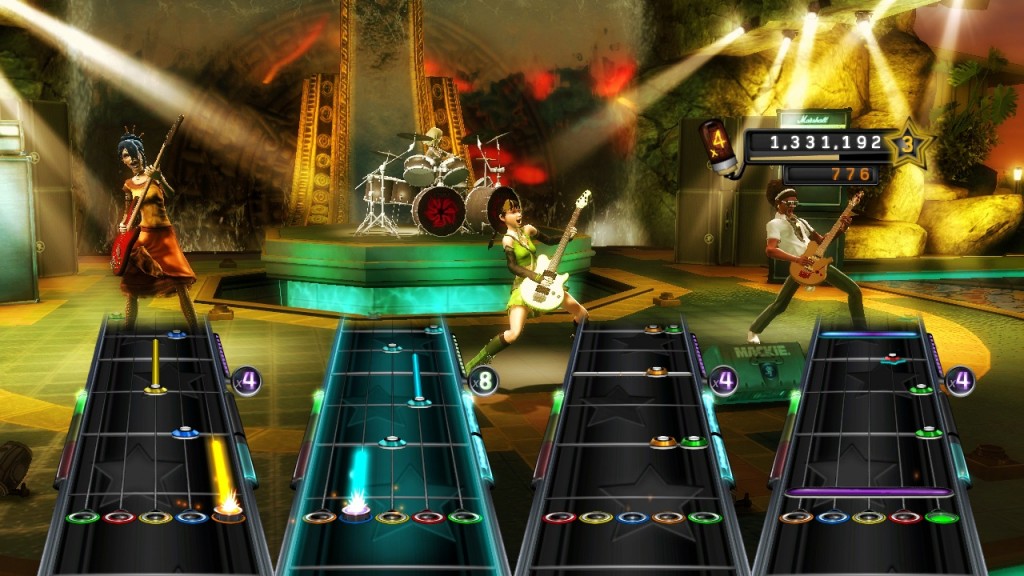 It seems that, in order to create a kid-friendly game, Neversoft looked at Avatar: The Last Airbender – The Burning Earth for inspiration. And where better to look than the game with five Achievements, one of which worth 300G?Neversoft must’ve thought, “We can do better than that!”, and slapped a 495G Achievement into Band Hero. And is it a rather easy Achievement? Yes.

Band Hero plays upon this retarded obsession with treasure that we all have, and awards us with a 495G Achievement for finding all the treasure. The treasure in Band Hero consists of sections of notes, referred to as Secret Notes. For each section of Secret Notes that you play correctly, you also get a 5G achievement. Just playing all the songs in the game, on Beginner, will net you 700G with minimal effort.

Well, I’ve just sold Band Hero to you there, score-hoarders. But if I haven’t managed to convince you of Band Hero’s superiority, here is one last thing you should know.

This song is in the game:

Oh, wait, did you think I was talking about the GameCola website? No no no. I meant the GameCola YouTube channel. (Heh heh.) Yep, YouTube finally forced everybody into switching over to the new channe ...