I’m reviewing Guitar Hero 5, aren’t I? Just…give me a moment.

As I sit here at my virus-ridden and slowly dying PC, I ask myself a question:

Have I wasted my life?

Of course I have. Everyone else has gone out, met people, had a nice family, and retired/died before the age of 20.

So what do I have to show for the big two-oh?

An extended knowledge of videogames, especially obscure ones. A taste in music that spans from Metallica to Lady Gaga. A one-sided realtionship with anime, manga and other forms of Japanese media. And a not entirely brilliant, but respectable, skill level at Guitar Hero. Speaking of which, aren’t there a load of them out right now? Lots of them. Good for me, because I just can’t get enough of these music games. Almost every day, a new Hero game is released.  And what do they all share (besides a flawed choice of songs)?

They all share the dreaded band gameplay, stolen from the Rock Band series. This is Guitar Hero 5, which continues the band aspects despite being called Guitar Hero.

So if you wanted Guitar Hero 5 to do what it should (drop the other blasted instruments and take us back to Guitar and Bass), then you will be greatly disappointed.

But of course, band-centered gameplay is the big thing right now. It’s bigger than Jesus. But band gameplay is a double-edged sword. Cast your mind back to Guitar Hero World Tour…

World Tour had “Beat It” by Micheal Jackson, the recently deceased king of pop. As you might expect, the vocals were very fun to sing. But the drummer just had a city of red gems to contend with, constant tapping that just wasn’t good in the slightest.

Spacehog, for instance. They made it to #1 on the Main Rock chart, once. But here in the UK, they made it to #29. No wonder I never heard of them. Speaking of “never heard of,” yet another Guitar Hero game is released without Europe’s true masterpiece, “Rock the Night.”

If I worked at Neversoft, things could change for the better…grrr… 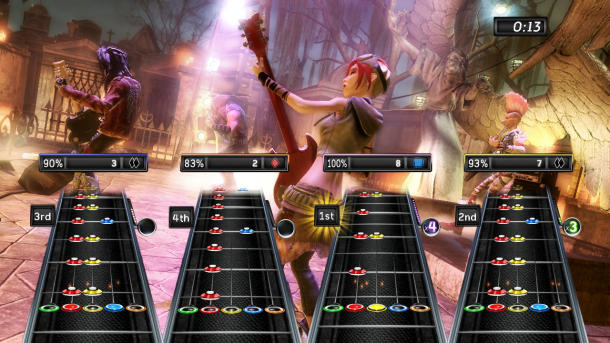 Guitar Hero 5 does have Kurt Cobain. They dug him up especially, and reconstructed him using toothpicks and marmalade labels. However, unlike celebrities from previous Guitar Hero titles, our favourite Walter Sullivan lookalike actually resembles his former self.

Remember World Tour and Guitar Hero 3? Of course you do, they only came out this year (hyperbole, of course). The celebrities in Neversoft’s previous Guitar Hero titles looked just as diseased as the main cast. In Guitar Hero 5, Kurt Cobain looks like Kurt Cobain. This is good.

The huggable man famous for painting his garage red appears on stage to play “Smells Like Teen Spirit.” Once he is unlocked, you can make your whole band consist of Kurt Cobain. This I highly reccomend, for it is good.

A lot of reviewers thought that including Kurt Cobain was a strange idea, considering he lied when he sang “I don’t have a gun” (and we all know what happened next). Well, did they think Jimi Hendrix in World Tour was weird? No, they didn’t. Hypocrites. Although, in all fairness, if they had included “Come As You Are,” there would probably have been reason to find it disturbing.

The widow of Kurt Cobain, frontwoman of  Hole Courtney Love, is offended by her late husband’s inclusion in the game, particularly because Neversoft have allowed the player to use him to play non-Nirvana songs. So who owns the license for the likeness of Johnny Cash? Whoever it is DID NOT COMPLAIN. That makes you an attention-seeking spendthrift, MISS LOVE.

Besides, Courtney babe, it’s fucking hilarious when Kurt Cobain sings Megadeth’s Sweating Bullets. When he opens his eyes wide, starts dancing and says, “Hello! It’s me again!”, I roll up in stitches every time! 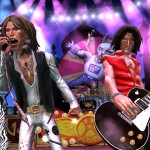 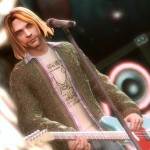 On the left? Aerosmith. I’m reminded of Daphne & Celeste’s famous song whenever I see them in Guitar Hero Aerosmith. “U-G-L-Y. You ain’t got no alibi, you ugly!”. But on the right, Kurt Cobain not only looking human (a first for Neversoft), but also looking just like him.

Other redeeming features of Guitar Hero 5 are few, sadly. On the plus side, the new Career mode format contains challenges, although these soon grow pretty boring.

Neversoft have finally abolished the purchase of clothing for your character—you unlock it instead—which means your money is saved for slightly more important things…wait, this money doesn’t even have a use anymore!

Also, you no longer have to buy guitar bodies, characters and all the other stuff you grinded “No Sleep Til’ Brooklyn” to afford in Guitar Hero World Tour.

Also, there appears to be a far better engine (improving Guitar and Bass controls), which is very welcome. Besides a number of generally unheard-of songs, the game does contain “A-Punk” (which you’ve heard everywhere in the last year), Rammstein’s “Du Hast” and of course, Iron Maiden’s “2 Minutes to Midnight” (a song that I thank Grand Theft Auto Vice City for introducing me to).

Also worth note is the inclusion of “The Spirit of Radio.” More Rush please, there isn’t enough. No, not that Rush.

When it all boils down to it, which Guitar Hero you purchase is down to what music you like. That is why I always thought band specific titles were an odd idea, although I did thoroughly enjoy The Beatles: Rock Band, so maybe I’m just hating upon Neversoft again.

Michael's motivation to write GameFAQs guides include laziness and mermaids.