Lady, all night I’ve dreaming of days that you spent by my side. The best days of my life, don’t you remember?

Dancing Eyes is one of those games I immediately felt I had to talk about. But now, with my fingers mercilessly tapping away at the keyboard, I don’t really know what I want to say. Do you ever get that? I certainly do. I vie for someone’s attention to be able to tell them something, but I then forget why I called them in the first place.

Let’s have a screenshot to refresh my memory. 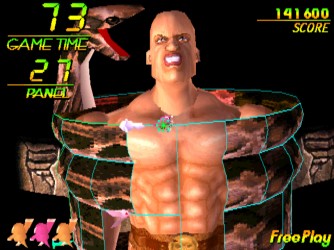 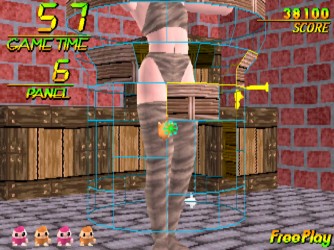 I Only Have Eyes For You

Dancing Eyes is a game where you are required to undress people and objects. I say “and objects” because there are joke stages within the game, and also a more family-friendly setting that lets you undress things like cars and milk bottles.

It isn’t easy to draw around these panels, however, thanks to the little critters that get in the way. The enemies are clever enough to be able to predict where you’re going to go, and in the later levels they had my blood at boiling point. There are items you can collect that make your job easier, but even so, you should always be cautious of the enemies and try to visualize where in the play area that they are.

Once you strip an object or a person down, you can watch a special “Show Time” sequence where an animation is played. Depending on how the arcade machine is set up, you can zoom in on the scene to see things in “greater detail.” Every stage has its own “Show Time” with exclusive sound effects, and usually involves something suggestive.

Did you expect anything less? …really? At least there is no nudity, which is good; I’ve had enough of that after, well, you know, this.

If you successfully beat fifteen stages, you will have completed Dancing Eyes. For the first thirteen stages, you have a choice of which stage you’ll play by selecting from a roulette, so there’s some variety. The last two stages are excluded from the roulette, and once beaten, they mark the end of the game. These two stages will be the most taxing of them all, and you will use many continues. 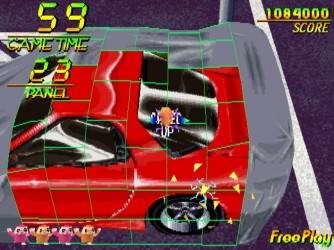 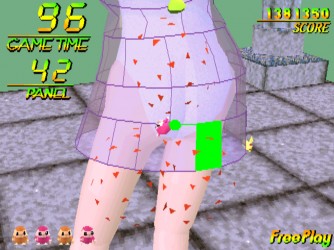 Can’t Take My Eyes Off Of You

It saddens me that the PlayStation 3 remake was quietly cancelled. I had my “eyes” on that version for some time, and I was willing to buy pre-paid PlayStation Network cards for the Japanese store so that I could purchase the game legitimately. It looked to be the same game, but on a larger scale, with full high-definition graphics. This included brand new models, textures, modes and music.

Namco has done their utmost to make it as though the trailer has disappeared from the Internet, but I’ve still managed to find it. Why am I so peeved? Compare this to the screenshots above. A full high-definition remake—I’d have bought that.

Because Dancing Eyes has never seen a console release, the only place to play this game is in a Japanese arcade or on your computer using an arcade machine emulator. Seeing as Namco has effectively given up on this game, I believe that there is no harm in giving this game a play-through on an emulator. If Namco disagrees with me, they’ll deliver that damn PS3 version.

I think they should un-cancel it.

Dancing Eyes is an enjoyable game, but I find it very hard to explain why. I suppose it is all due to the well-balanced gameplay, the joke stages, and the charming graphics. It isn’t a game that will blow you away, but the mechanics are sound and everything works pretty well.

So the high score I bestow upon this game is basically the result of having been completely impressed by it. It’s got that Katamari Damacy quirk, even though it wasn’t made by the same guy. It’s a light, roughly one-hour, silly little game. But it also has heaps of replay value, contains excellent game mechanics and is competently made. I recommend it. 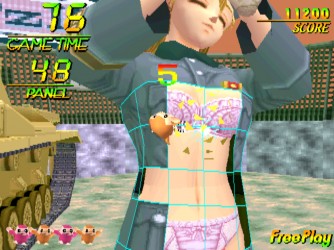 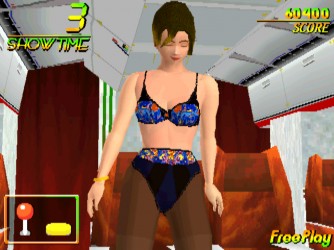 I come into this review having just completed VVVVVV, having taken two hours to do so. Yes, two hours. From beginning to end—though I do still have time trials and other such unlockables to aim for