Now for something completely different: a review of an arcade videogame. You know, the big machines you pump quarters into?

Reviewing an arcade title requires a slightly different approach, because the quality of the hardware itself differs with each machine. If I complain that, say, part of the machine is very uncomfortable, that could just be part of the machine I played, not all of them.

Also, credits required and their value can differ between machines. This is because some idiot designed arcade machines so that their functionality could be tailored to the person hiring the machine. Why would you go and do that?

While writing a review for one specific machine could address those issues, it’s also a rather stupid thing to do—you’re not going to say, “Hey, that’s a good SuperNova,” and fly all the way over here to play it.

I have risen to the challenge of reviewing an arcade machine, particularly because it is one that I have played semi-religiously for nigh on five months now. Since I discovered its existence, I’ve been drawn to Bugsy’s (no, not Puggsy’s) for their SuperNova machine, and their comfy seating area ’round the back (seriously, it feels like 3 a.m. in that lounge, whatever time of day it is outside).

I’ve been there quite often—so often that the people who work there recognise me. On occasion, I travel there with my group of fellow-minded players, but more often than not, I’m in there by myself.

I feel like a lot people are watching, and I get that imaginary warmth on the back of my neck. Occasionally, you get the cute girl who smiles at you, or the guys who film you, and say they’ll upload you to YouTube (I’m still searching for that clip). But most of the time, it’s pretty quiet in there (not that business isn’t booming, just mostly that people are minding their own).

The goal in SuperNova is rather simple. Hit the massive metal pads beneath your feet that correspond with the arrows that are traveling up the screen. This is all that is ever required of you, no matter which difficulty mode you’re playing.

Doubles is a bit of a rip-off at two credits, as Pump It Up generally lets you play Doubles for only one.

Nonstop gives you a set of three or four songs, and when you fail, you receive Game Over. I don’t touch Nonstop mode, through fear of wasting my credit if I fail out on the first or second song. It’s a good mode if you’re looking for a challenge.

The tutorial, on the other hand, is kind of pointless. If you’ve ever played a DDR title, then you know what you have to do. There is no need to be dragged through it and waste one perfectly good credit.

The SuperNova machine separates songs out into difficulties. However, if you continue pushing the right selector on the front of the arcade machine, you can select a hidden mode called “All Songs.”Selecting “All Songs” opens up the wide, full selection of over three-hundred songs. If you’re looking to get your money’s worth, it is the mode you should always choose.

When selecting the song you wish to play, there is a hidden menu that can be accessed by holding the OK button rather than just pressing it. On this menu, you can turn on difficulty enhancers (why would you even want to do that!?), and also turn the Note Skin on (which makes it easier to see where notes are). You can also choose the character displayed on-screen, which is entirely a cosmetic decision (I always set the on-screen dancer to Emi).

The song selection is superb. It manages to cover many songs that I love from the series. Firm favourites of mine include Captain Jack’s version of “Centerfold,” “Dragon Blade,” Des-Row’s special remix of “Kagerow,” and “Love2Sugar” by Noria (from BeForU). In general, if you’re starting out but want to push your skills forward, you should be playing BeForU songs, as they’re generally quite fast but not too challenging.

The song selection, as I’ve said, is spot on. The console versions of this series (which I prefer for their availability) always seem to contain songs that aren’t interesting or are just plain old dance music. Until the next DDR game is released (penciled for release Q2 this year—but alas, no sign of it yet), we won’t know for sure whether Konami has made the same mistake again. I pray that they don’t. From what we’ve heard, “Better Off Alone” is going to appear. Nice!

A few more things to mention on the songs—if you’re not into the music of Dance Dance Revolution, then you can’t play the game. Allow me to explain, as I’m not trying to sound like an asshole. 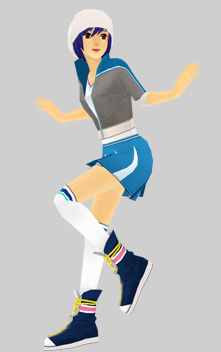 To hit the arrows, you gotta be able to hear the music and appreciate the music. It’s not as simple as 4/4, especially not once you’re on Difficult. There are underlying rhythms and syncopated steps, and the better you know the song, the better you’ll do. If you’re not into Japanese pop music, or synth-driven rave music, you’re going to have a hard time playing. The home releases are better for players who’d rather dance to things they know—but if you want to become good at this lark, you should be playing the “Konami tunes” on those games.

There isn’t much more that can be said for Dancing Dance Revolution: SuperNova. The game has what I consider to be the best interface and the best song selection. Of course, it’s also the only arcade DDR game I’ve played. Looking forward to a possible trip in the summer to test-drive Dance Dance Revolution X, which should be exciting.

For all it’s worth, Dance Dance Revolution is about good music, good fun, and being active. You know what? This kind of exercise really is good fun, and it helps take a chunk off your mind so you come back to whatever you were doing totally refreshed.

It’s going to crash back into fashion, hopefully, (if and) when the next game comes out (currently it’s up in the air as to whether it’ll be May or June).

Being a new year and all that jazz, it's time to do the usual resolution list. Translation: Make a bunch of self-promises whilst drunk, and break them within five days. OK, so I might be exaggeratin