The latest GameCola Podcast—featuring hugs, tears, depression, and love—has just been released. It’s made of up two discrete segments: One in which Michael Ridgaway and Vangie Rich talk about the emotional impact of many different videogames and of videogames in general, and one in which Paul Franzen and Michael Gray go in-depth on Case 4 of Phoenix Wright: Ace Attorney. Listen to it right here, right now:

0:00 – 1:18: Introduction, wherein I try to make these two disparate segments fit together naturally.

27:24 – 27:45: Bridge, wherein I try to make these two disparate segments fit together naturally.

This is the latest in a series of GameCola Podcast segments about the individual cases of Phoenix Wright. (Case #1, Case #2, Case #3.) In this segment, Paul and Michael discuss: 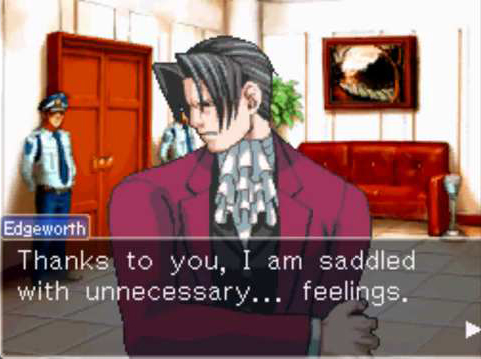 A game's Informativity score does not factor into its overall score; Informativity is merely an indicator of whether the game is actually helpful from a health-education standpoint.