“You’ve reviewed too many modern games!” OK, OK, I understand. Not enough bleeps and bloops and blops and bloppity-bleep-bloops and chim-chim-cherees. So tell you what, let’s go back to 1993.

1993. The year that Aika Mitsui was born, and the year that André the Giant died. Nelson Mandela won the Nobel Peace Prize—well, he shared it with Frederik Willem de Klerk, but in all honestly, I doubt you’re that bothered to check up on any of my facts. 1993 was a boring year and I’ve found it difficult to locate anything interesting that happened.

Hold on, Holiday Lemmings came out. No, not interested? Me neither. 1993 was the year Hudson Soft released Bomberman ’93 on the TurboGrafx–16, though. Bitchin’.

Bomberman is one of my guilty pleasures. Ever since I was young, I’ve wanted to become the Bomberman Master. I wanted to B-DAMAN when it came to placing bombs. And I didn’t care how many years it took. How many times I had to be iced on Xbox Live to achieve my goal. How many stupid pieces of merchandise I had to buy and how many different versions of Bomberman I had to complete.

So glad nobody heard me, ’cause they’d be lining up to heckle me. You see, I gave up—and now I’m stuck between Dance Dance Revolution and the Lego games. It all went wrong somewhere.

Becoming good at Bomberman is a difficult task. Soon after vowing to be the very best, like no-one ever was, I found that my will slowly faded. I couldn’t continue playing the Bomberman games—they were mindless, jippery bobblecock. Place bomb, walk away, walk back, repeat. Find the door. Congratulations. Floor 2 of 50. The same damn thing.

There are a few Bomberman games that I can still play because I can enjoy them for what they are: genuinely awesome fun. Bomberman ’94, aka Mega Bomberman, is obviously the best Bomberman game ever made, but if that’s a story for another time, then let us take a look at the game released the year before—the aptly named Bomberman ’93. Why? Because it was a Virtual Console launch title! At the time, I had an Xbox 360 and Mortal Kombat 3, so Nintendo obviously had to fight back with something decent.

I did not know about Bomberman ‘93 until I had the pleasure of experiencing it on the Wii’s Virtual Console. Seeing as the only other decent game on there at the time was Super Mario 64, it wasn’t really a hard choice—I ended up getting both.

As the Wii is a multiplayer-centric console, my peers and I played the game for its versus modes and steered clear of the single-player options. Being the black sheep of the gang, I woke early one morning and crept downstairs. Turned the Wii on silently. Launched Bomberman ’93. I heard rustling upstairs, so I quickly jammed my headphones into the television. I experimented with the single-player mode. 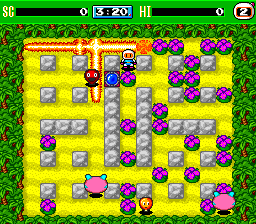 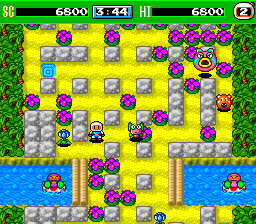 Let’s be serious here for a second: this game is a Bomberman game. And down to the core, it is the same repetitive “kill all the monsters and find the door” gameplay. It is a tad more advanced than the original Bomberman—but how much is a tad? A tiny smidgen? A small drop? A measly iota? Yes to all three.

After all, Bomberman on the NES is boring after about Level 3 or so—and to think, there are like 50 stages in that game.

So what does ’93 have up its sleeves, besides its armpits?

I think I distinctly heard some canned laughter.

For starters, ’93 has an actual story (although weak), and its bosses have their own gameplay gimmicks. There still isn’t a lot to sink your teeth into, but level themes make the game stand out a lot more than the first Bomberman.

So I mentioned the gameplay quickly before; allow me to go into a bit more detail. If you know what Bomberman games are like, this will probably bore you.

A level is made up of blocks, walls, obstacles and enemies. Under only one block is the exit, which takes you to the next level. To use the exit, you must kill all enemies.

(If we’re being picky, Bomberman’s bombs actually capture the enemy monsters, despite the fact that we clearly see them explode).

You must uncover the exit and kill all enemies to progress. Whatever you do, do not bomb the exit! Just don’t.

I know you’re tempted to do it, but on your head it will be! 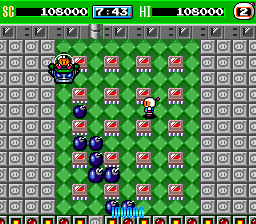 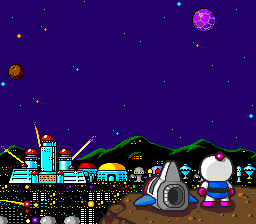 In each level there are also up to two power-ups or items hidden underneath blocks. These include skates that speed you up, remote control bombs, and a heart that allows you to take more than one hit before you die. The best power-up is the one that allows you to traverse over the blocks themselves, enabling you to glide around the stage with ease. Overall, these do not break from the game’s trends all too much, which is good for someone who expects every game to be boring and monotonous, like myself.

Bomberman ’93 is like the latest FIFA (if the latest FIFA were actually a good game)—nothing has been taken away, and a few various things have been added. Even so, it’s still the same game, just with a few more gimmicks, so to speak. For example, tiles you cannot place bombs on, conveyer belts, warps, and blocks that rotate when you push into them. They make a nice break from the usual bland level design, but that’s still what it is: bland.

The game is roughly 64 levels long, which you can’t argue with. For an overall look at game length, I’d say it’s about 1½ hours to 2½ hours of playing time. The eighth level in each world is a boss, and there is a final set of levels that make up the last world once all eight are beaten. A lengthy game but beatable in one sitting, which is necessary, given its original system. It does, however, use passwords—which is very good considering that my attention span barely lasts two hours on a good day.

So ’93 can be easily plowed through—and difficulty-wise, I’d say it picks up at about World 4, although it has tricky levels dotted here and there beforehand. It has a long learning curve, and power-ups soon add up (so long as you do not die and lose them). Staying alive for as many stages as possible will help you stack up the abilities, which you’ll need for the bosses.

If you die on a boss stage, you’re going to be at a major disadvantage when you respawn. Because there are no savestates on the Wii, you’re on your own here. Good luck! 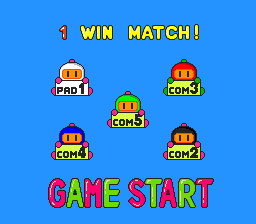 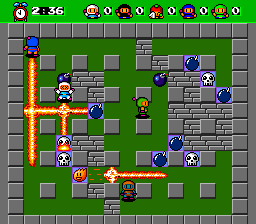 Being Bomberman, the multiplayer is where the game truly shines. It’s classic, balls-to-the-wall Bomberman, where human and/or computer combatants face off to the death. It keeps all the gameplay aspects of single player with a couple of extra power-ups.

Get a few people who know their shit, and you’ll have matches that explode like fireworks. Cussing, ranting, raving and banter! Get a couple of drinks in and effectively piss yourself with laughter when someone grabs the bomber-diarrhea and slow-down diseases.

That is what Bomberman is about, and why I love the series so much. Grab yourself Bomberman ’93, get some friends ’round (given they’re not all online friends), and get blasting!

If you do not have immediate friends, only a hardcore fan of the series should check out ’93. Once you’ve played one Bomberman, you’ve played most of them. Going by the single player alone, you should avoid this game unless you love Bomberman so unfathomably much. If you’ve got people to play it with, then since it costs less than ten smackers, this game is well worth considering.