If there’s one thing popular musicians like to do, it’s branch their careers out into acting to prove to the world that they’re multifaceted renaissance men/women. Of course, more times than not, this hubris only leads to films like Mariah Carey’s Glitter or Britney Spears’ Crossroads and only serves to prove that they should have stuck to making music or, in the case of these two examples, taking a job at their local Arby’s and fading into obscurity.

A somewhat more rare occurrence that yields arguably more disastrous results is when musicians decide to star in videogames. Now, before we begin, I just need to clarify a few things. I will not be looking at games where the musicians have a passive role. I know that Debbie Harry had a role in the Sega CD’s Double Switch, that GWAR had a part in the Beavis and Butt-head videogames and that Shaq Fu had a few members of the Wu-Tang Clan in it, but these games are not BASED on the musicians (and no, for Christ’s sake, I am not considering Shaquille O’Neal a musician just because he shat out Shaq Diesel in the mid-’90s).

Also, Rock Band/Guitar Hero or any other rhythm games starring musicians do not count. Seriously, I’d like to keep the page count under the triple digits, thanks.

To be fair, I’m going to take a look at both versions of this game, since they are so different from each other. We’ll start with the Atari.

Thanks to the primitive graphics, storytelling on the Atari 2600 was a bit limited and relied on your imagination a lot more than later videogames. For example, if you see a white stick figure interacting with a black stick figure and a blocky vehicle in the background, the only way you’re going to know whether you’re playing Return of the Jedi or Driving Miss Daisy is whether or not the vehicle has something resembling wheels.

Journey: Escape similarly relies heavily on your imagination, because if it weren’t for the manual and the awful, tinny chiptune rendition of Don’t Stop Believin’, you’d have no idea Journey had anything to do with this. To the untrained eye, it would appear that you are a little man trying to avoid floating heads, bipedal hearts, corral fences and disappearing boxing ring bells while trying to collide with small toy robots and the Kool-Aid Man all while running in outer space. However, what is actually happening is that the little man is a member of Journey, avoiding shifty-eyed promoters, love-crazed groupies and sneaky photographers trying to run into Loyal Roadies and Mighty Managers all while—uh…well, running through outer space. They never really do explain that part. Once you’ve gotten all members inside the Scarab Escape Vehicle, Journey celebrates by taking their big yellow Scarab spaceship and shooting lasers fucking everywhere. Because, seriously, wouldn’t you?

The game doesn’t offer much in the way of fun, since the whole point is that you just run through huge crowds of enemies and do your damnedest to not get hit. Though, really, that describes about 60% of the Atari’s game library.

The Journey arcade game, however, is a bit different. Though, before we get into that, a quick little fact about this game.

The arcade version of Journey: Escape originally had nothing to do with Journey but was, instead, going to be the first arcade game with a camera installed to put a picture of your face in the game. Atari scrapped this idea, however, when a man in a bar they were testing the machine in did precisely what I would have done—he stood on a chair, dropped trou and played as Mr. Assy Face. After this, Atari scrapped the idea and instead got the biggest musicians of the time and stuck their heads in the game, because we can’t be trusted enough to have nice things.

It’s true to the name of the game and album they are still trying to escape, but this game is much more polished in terms of gameplay, graphics and audio, in that the beep-boop rendition of “Wheel in the Sky” is passable background music and doesn’t make you immediately want to pop cyanide. Instead of being one repetitive, awful game, the arcade version has one minigame for each band member, none of which is a showstopper, but at least they mix up gameplay a bit. The game’s not a masterpiece, but if you see it at an arcade it’s worth popping a quarter into, if only for a laugh at Steve Perry’s head plopped on a cartoony body.

I might be the only one in the world, but I have such a guilty love for the all-but-dead full-motion-video game style. The style wasn’t generally suited to, say, first-person shooters or platformers, but it was a great medium for puzzle games and point-and-click adventures. Unfortunately, it was such a novelty at the time to have real live video in an interactive medium that some FMV games are debatably not even games. One example of the kind of “game” that the FMV style helped briefly popularize is the unfortunate “right-place-at-the-right-time” game. In a typical RPRT game, a story is unfolding and you have to be…wait for it…at the right place at the right time to get it all and finish the game. Not so much a game as it is just navigating a DVD with an unlabeled, jumbled menu.

Adventures of The Smart Patrol combines the point-and-click adventure with the RPRT type of game and produces…well, a nonsensical trainwreck, essentially. The game is hard to follow for two reasons. First, if you aren’t a Devo fan, then you aren’t going to get a lot of the in-jokes and references to Devo mythos. However, as a big Devo fan, I can tell you even I’m confused as to what the shit is going on because of the second problem—unless you achieved the statistically improbable feat of being exactly where the game intended you to be every step of the way the first time you played the game, the game is going to make as much sense as taking chapter one from Moby-Dick, chapter two from High Fidelity and chapter three from The Da Vinci Code and binding them together.

For example, in my first playthrough, I pack away my potato cell phone after speaking to Booji Boy, who looks like a masked burn victim. I then go to a donut shop guarded by angry pilgrims. They won’t let me through, so I leave. Then I get assaulted by a robotic turkeymonkey and hurled into another area. I search the new area, the house of General Boy. I look at his computer; there’s nothing that helpful on it. Then I leave and go to a laboratory. They require a password to enter. I don’t have it, so I leave. Then I go to Club Devo. Nobody’s there, so I leave. Then I go to the Smart Patrol lair. Nobody’s there, so I leave. Then I go to this girl’s house, climb a tree and peep into her bedroom. Nothing particularly lewd going on, though there is some plotline stuff I don’t get because I wasn’t around for the context, then turkeymonkey spews slime on me and sends me to the hospital with Osso Bucco Myelitis. I pay for the cure, leave, and that’s pretty much when the game ended. I lost.

Now, I don’t care if you follow Mexican telenovelas; nobody can be expected to know what the hell is going on when presented with that. The only way to finish the game is to play trial-and-error until you do everything right. However, after eight playthroughs and still having nary the slightest inkling of what in the name of fuck I’m doing, I don’t think even the trial-and-error method works very well with this game. It’s an interesting game for hardcore Devo fans, but unplayable for anybody else.

It’s the future: 1996. Aerosmith is kidnapped by an evil corporate-military entity called the New Order Nation. How do you react? The correct answer is “Who cares? They haven’t done anything good in decades.” Or “I would bribe this NON to take away Dave Matthews Band and Miley Cyrus while they’re at it.” The wrong answer would be “Save them at all costs with guns that shoot compact discs.”

Unfortunately, Revolution X took the latter route and leaves you to go through a substandard rail shooter armed with guns that shoot 700MB of pure murder against an army of evil-for-evil’s-sake yellow-clad nogoodniks who want to combat youth culture by banning music, movies and videogames. So, presumably this evil organization is headed up by Jack Thompson and Tipper Gore.

The whole game’s plot is absolute, cringe-inducing, I’m-embarrassed-for-you drivel about overthrowing this evil corporate/military empire and making the world safe again for rock while listening to Aerosmith songs like Eat The Rich. Though, it’s a bit hard to get into this idea that Aerosmith is the mouthpiece for the proletariat considering, between them, they have enough money to make Scrooge McDuck look like Oliver goddamn Twist.

Stupid plot aside, if shooting a bunch of enemies that look like Curious George’s Man in the Yellow Hat all gussied up for a night out at a goth club with a gun that shoots CDs (and, after upgrades later on, laserdiscs!) sounds like fun to you, then this game might just be right up your alley. Other things that should be up your alley: self-flagellation, a lobotomy, and suicide—in that order.

Imagine, if you will, Michael Jackson walks into a bar (insert joke here), tosses a coin into a jukebox, sprinkles glitter on a bunch of men, kicks the women out of his way, collects all the children, then lets a monkey ride on his head until it tells him where Joe Pesci is, at which point a dozen or so more men come out and they all start dancing until all the men drop dead (except Jackson; that comes later). This scenario accurately describes both level 1 of Michael Jackson’s Moonwalker and any given night of Jackson’s life after 1993.

Despite the ridiculous premise, however, Moonwalker is actually a pretty fun game. Michael Jackson’s sparkle-kick and ability to make those around him dance until they drop dead may look like superpowers conceived of by Carson Kressley, but it actually makes for a fun beat-’em-up. Also, Jackson’s screams of “Whooooooooo!” between levels are always good for a laugh.

Unfortunately, Moonwalker is a bit on the short side with only five levels, but sometimes good things come in small packages. Now, in an attempt to maintain a modicum of class around here, I’m going to completely ignore the incredibly tempting pederast joke that last sentence set me up for and end the column here. 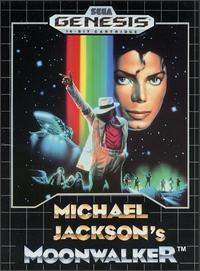 A lot of the enjoyment derived from Moonwalker may be from the pure ridiculousness of the game and things that became funny after the game was published (i.e., Michael roaming around searching for small children), but if you take all that away you’d still have a good game. It’s a solid pick up and play beat-’em-up game. And the jokes it allows you to make at the expense of a deceased musician?—Well, that’s just gravy.

Happy New Year! So, what did you do to celebrate New Year’s Eve?