When Curtis James Jackson, better known as 50 Cent, turned down the role of Carl Johnson in Grand Theft Auto: San Andreas, he said “I only voice myself in videogames.” Well, I can’t think of any videogame character more like 50 Cent than CJ. (Then again, he does also look a bit like Naughty Bear.) I find it quite funny though—50 Cent turned down voicing CJ, but he still went on to star in videogames where every sentence is punctuated with f**k, s**t, n***a or m****rf****r.

When Bulletproof slid its way into the consoles owned by the filthiest degenerate gangsters, the story and voice acting was truly atrocious. 50 Cent had done the wrong thing by limiting himself to roles where he plays himself—that game was an abomination.

But then again, what does Fifty know? He is only a incestual brothel-owner (and that was a very clever joke).

Fiddy has proved that taking another stab at something you messed up can be a worthwhile thing to do. This is technically the third game 50 Cent has attemped to release. Blood on the Sand doesn’t suck even remotely as bad as the last Fifty game, Bulletproof, or the special edition version for PSP. Whereas Bulletproof doesn’t know exactly what it’s trying to be, Blood on the Sand does. It doesn’t skimp on its thievery from other third-person shooters as it moves closer to being exactly like The Club, a similar third person shooter released a a year or so prior. 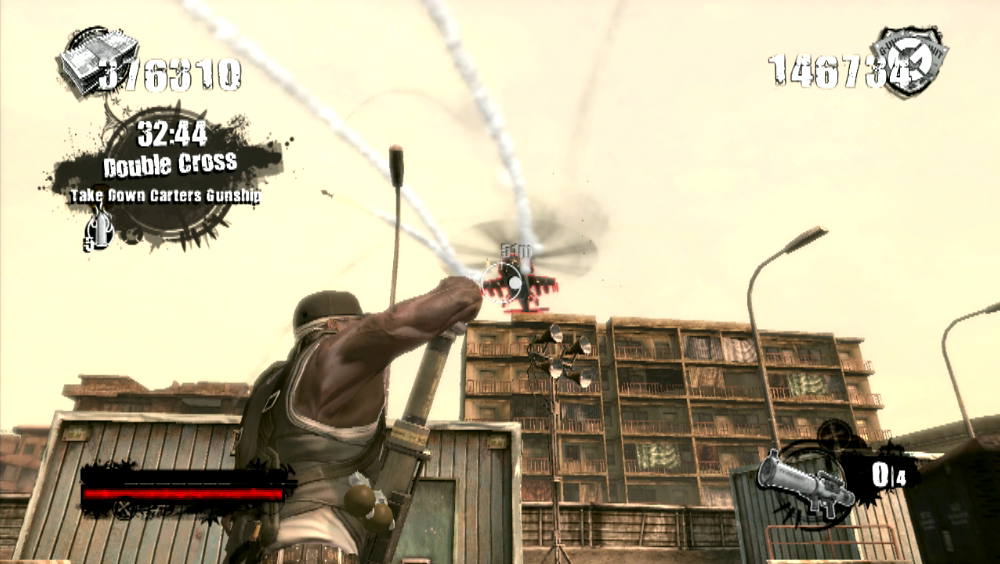 Like The Club, the missions in Blood on the Sand are split into chapters—each containing targets to destroy and collectibles to gather, which you are ranked on accordingly. Similar to Army of Two, you are playing co-operatively with another player, and can carry a number of weapons with you for different types of enemies and combat situations. Enemies up close? Automatic shotgun or a submachine gun will do the trick, but for ranged conflict you carry that assault rifle just in case. The cover-to-cover system is also as good as that in Gears of War or Army of Two, even allowing you to move along and jump between cover, but like Gears of War, you can’t get your AI partner to move from the cover you want to use.

Where I felt Army of Two only worked as a single player game on rare occasion, Blood on the Sand works very, very well in a single-player environment, as you can effectively leave your AI partner to die. I know it sounds harsh, but how many times have you darted out from cover to save your friend and you got shot in the middle of trying? Leaving your G-Unit bretheren to their untimely death isn’t a bad thing, as they are automatically brought back to the wide-world when all the surrounding enemies are dead, allowing you to take the guns-blazing or stealthy approach without having to worry about their ass getting in the way.

Lack of friendly fire annoys me though, as I can’t cap my AI partner in the arse the same way I can the other survivors in Left 4 Dead (mad-cap single-player level dashes are fun!).

With analogue stick sensitivity that feels just about right (which can be toned down but not tuned up) and a control scheme that is moderately comfortable, the nine missions of Blood on the Sand do not become too dull. The game itself is just long enough to be an afternoon blast, and not even the slightest bit frustrating when you’re replaying for Achievements, because of the short nature of each checkpoint. 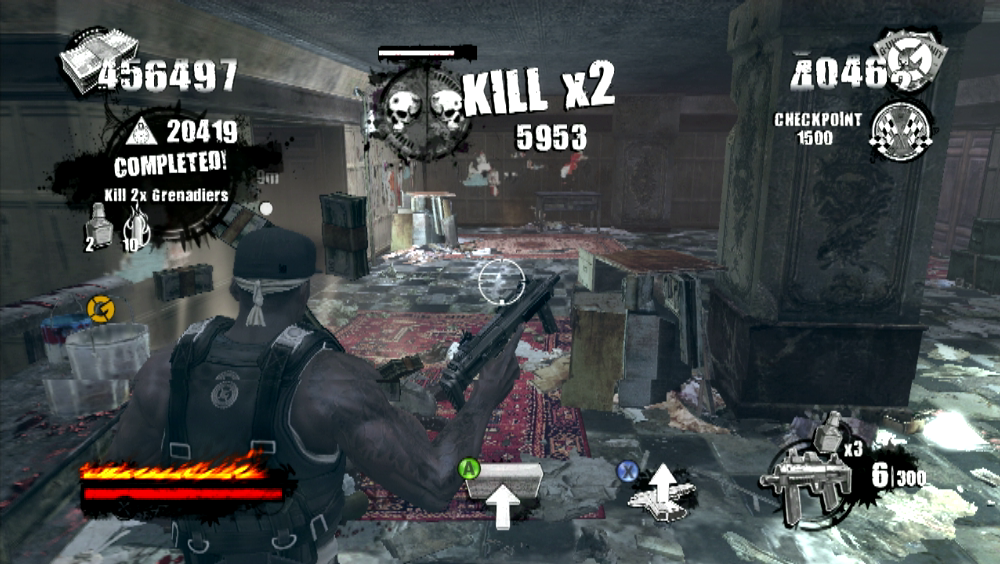 Like a fan-fiction crossover of Dragon Ball Z and Kim Possible (believe me, I’ve read one), the story of this game is absolutely terrible. If you’ve read reviews already, then you know the gist—50 Cent does a concert and doesn’t get paid. Naturally, violence ensues, because 50 Cent is of an ethnic minority known for being violent doesn’t take any shit from anyone. I can’t see how a writer sat down to produce this game without intending to create satire, because the use of bad language is embarassing and ironic. The narrative makes me piss myself with laughter due to its reliance on stereotypes (all middle eastern citizens are terrorists, apparently).

You won’t be playing Blood on the Sand for its “critically aclaimed storytelling,” because it just doesn’t have it. The story is truly forced: 50 Cent would never play a live performance unless he was absolutely guaranteed the money, and secondly, he’d never take some Damien Hirst-inspired crystal-and-diamond-encrusted skull as payment when he was promised a nice ten million instead. Anyway, it belongs in a museum! Or on Fifty’s head. 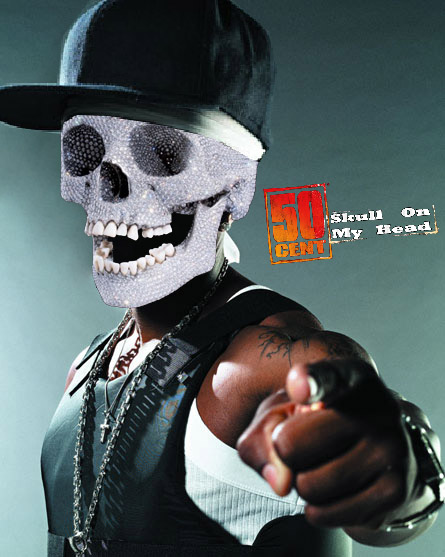 The actual skull (the writers stole borrowed the concept from) is worth well over fifty million of my British pounds, For the Love of God! Actually, if I were offered that rather than $10m I’d probably take the skull, too. Just why does Anwar the backstabber (wait, everyone you meet is a backstabber?) posess the skull in the first place? That’s never really truly cleared up. And why does he look like Peppy Hare from Star Fox 64 crossed with The Hood from Thunderbirds?

After 50 Cent takes the skull and pretty much falls in love with it (skull-dicking scene omitted), a woman turns up and darts off with what 50 now considers to be HIS skull (even though he’s only had it thirty seconds). 50 Cent does what comes naturally to him, by waging war – turning an unnamed Middle Eastern country into a warzone. It seems all too unbelievable, but perhaps that’s what we’re after.

Gritty stories like Grand Theft Auto IV (subtitled “Let’s Ruin the Franchise”) and its download content packs have made me grow tired of realistic gaming experiences. If I can run into a broken down mall, with 50 Cent yelling “Knock knock m****rf****r”, packing a massive RPG launcher, then I’m gonna. I’m not interested in taking my cousin Roman down the bowling alley, because it sounds like some really awful innuendo. If I wanted to play a game of bowling, I’d load up Tekken Tag Tournament or actually go bowling. 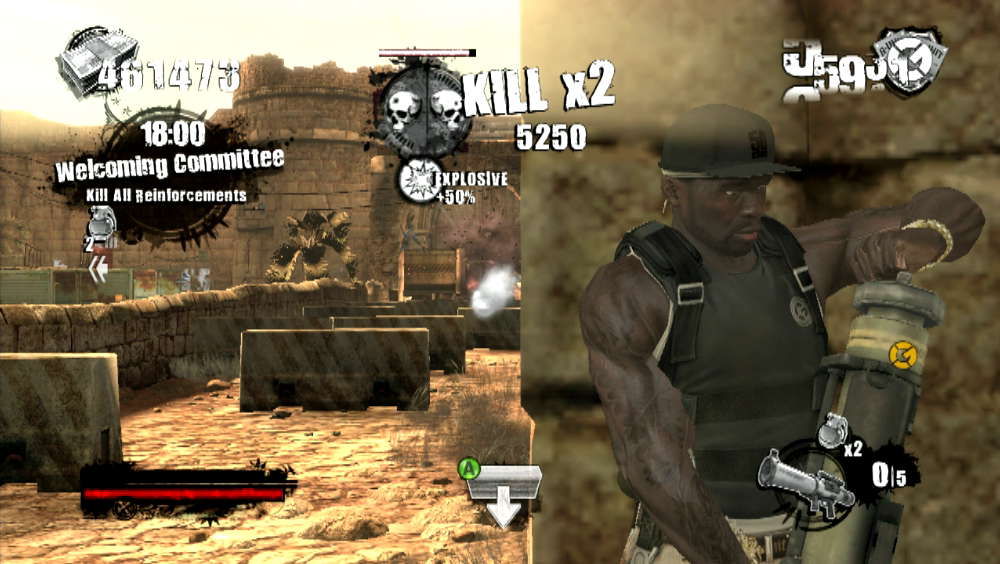 Being silly gives Blood on the Sand that Saints Row II edge, which thoroughly works to its advantage. The occaisonal “WTF” moments, like with Army of Two, help to break up the oversaturation of violence.

Because it is the usual “checkpoint-reached” shooter that you’ve played before, Blood on the Sand at least tries (but not very hard) to have a well-written story to counter-balance the samey gameplay. It relies a lot on coincidences and backstabbing, the kind of which you’ll always find in your generic action flick like Rush Hour or Rush Hour 2. This results in a story that is either a brilliantly written action movie or a piece of hilarious satire. I honestly can’t tell which. Unless you find it funny or charming, you won’t be playing Blood on the Sand for the story. You’ll be playing it because you like mindless shooting games with perhaps a scintilla too much violence.

So far I have discovered two endings—one where I let the backstabber woman Leila live, and the one where I don’t let her live. Either way, the ending is about 98.31% the same, with Fifty and his G-Unit bretheren claiming they’re going to lay “the beat-down on this bitch” even though she’s already dead if you’ve taken the other ending. Besides, this one choice at the end felt tacked on and didn’t really affect the narrative at all. It would have been cooler to offer these choices part-way through the game, which The 40th Day totally offered us.

For me, the violence and killing has to be just about enough to take my mind off of dressing up pretty girls and helping them win tournaments. If the blood doesn’t look right, which it sometimes doesn’t, then you know the visuals aren’t half as good as they could be. When a regular enemy dies on an elevated surface, the blood sometimes stretches unrealistically across the whole building. We’re talking a Godzilla-sized blood splatter.

Even though some of the special effects aren’t up to much, Blood on the Sand looks very pretty. When you collect money or points, the counters roll like a casino slot roulette. Stylish, most definitely. For a game that is now well over a year old, it still looks smooth and yet gritty, in a similar style to The 40th Day and Batman: Arkham Asylum. Of course, this comes as standard with the Unreal Engine—those generic good looks where everything is correctly proportioned and nothing has a clinical cleanliness to it. Grimey textures that sometimes barely load—now that’s the Unreal Engine for you. 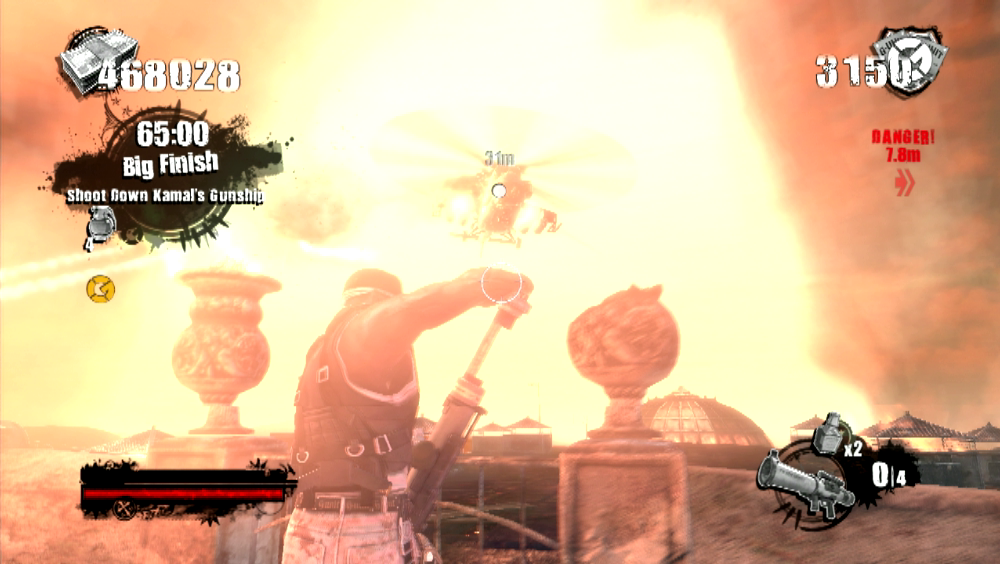 The lighting is exaggerated and gets in the way of the gameplay (which sounds like the Live Arcade remake of Perfect Dark, eh?). Smoke effects are luscious but again obscure my vision. It may be good-looking, but it isn’t perfect. Most of the time, characters don’t move their mouths when they speak, commonly referred to as The Burning Earth syndrome. It’s not perfect. It’s a little bit more than far-off, but it does look the part. The special effects when you collect money are pretty cool, and the way ammo boxes and posters glow is brilliant, so I can’t fuss too much. Slightly better than average, but befitting of the game itself.

Fully completing the game and unlocking everything requires that you find another person with Blood on the Sand, and you’ll have to play through it twice in co-operative with them, because only one person gets the co-operative achievements. When I played online, only the host recieved the badges for getting high-scores, so it is probably best to leave that for when you’re going through in Single Player clearing up whatever is left to get.

Online play is subject to the usual undesirable players (who tend to mumble worse than I do, and I MUMBLE for sure), but that is to be expected when the game is a violent shooter and all Xbox LIVE players are like fourteen. Best played with a friend, but that requires you and your friend buy Blood on the Sand, because the co-operative is online only. The lack of System Link support AND split-screen is a pain for me. It’s easy enough to run an ethernet cable from the back of one 360 to the other and set up a fast multiplayer match, so why not include this functionality? 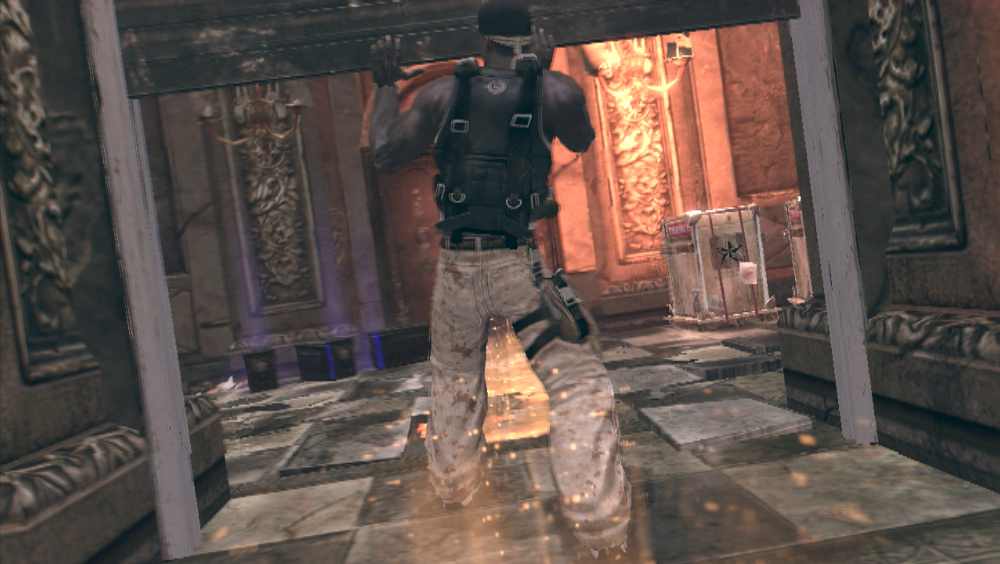 No system link or split-screen makes Blood on the Sand lose a lot of the love I have for it. Plus, the game could benefit from a deathmatch mode, but I’m not going to hate on the game for not having one, because too many non-multiplayer games are getting the multiplayer treatment. Assassin’s Creed, BioShock et al.

You can pretty much say that Blood on the M****rf*****g Sand is an average third-person shooter—but with moments that shine here and there. Where it may be considered good, the parts that are great are significantly worth playing the game for. If you played and enjoyed Army of Two, then this is worth buying now that it is much cheaper. You have to shop around for pre-owned copies, but when you find one, you’ll have difficulty turning off Blood on the Sand.

50 Cent: Blood on the Sand is not an awful game. If you don’t like the music, then play with the original game score. Hate that? Stream some Metallica from your Windows Media Center PC instead. This review is over.

Skip Ryder, Human Pathfinder for the Andromeda Initiative and all-around anxious person, tells the candid story of his exploits.