Thoughts for a Rainy Afternoon

It’s weird how things change. I was recently looking back over the archives of “Gamer Girlfriend,” which date back to early 2008, and I was surprised to notice a gradual but distinct progression in the way my column has evolved over the years. Originally, it was about the crazy antics and wacky misadventures of Mike, my own dear “Gamer in Residence,” and the trials and tribulations that came from first dating, and then living with him. After a while, it was about my own tentative forays in the gaming world. “Reflections on Grand Theft Auto IV” was followed with a cute story about how I acquired my pink DS and very first game cartridges (Animal Crossing and Cooking Mama). Then came Kingdom Hearts, the first  “real” game I ever played by myself. From then on, my column became increasingly focused on the games I was playing, and somewhat less on the games Mike was into.

Looking back, I’m not entirely sorry for the change. I do kind of miss my “outsider’s perspective”, from whence a lot of the early humor in the strip came; but at the same time, I have come to appreciate and enjoy many of the games that Mike plays; and I truly do cherish the time we spend playing together.

Of course, “playing together” is a relatively loose term, as it in no way implies that Mike and I play competitively. We tried that a few times, and, well. Those of you who know Mike—hell, even those of you who just know him from having read this column—should have a pretty good idea by now of how competitive he can be. (For the record, this is not limited to videogames; he is just as bad with Clue and Settlers of Catan as he is with Mario Kart.) Anyway, we have learned the hard way that we have to be very careful about playing together. Games like Boom Blox and Mario Party have come damn near close to destroying our relationship, and Mario Kart still holds the dubious distinction of being “The Only Game That Has Ever Caused Mike To Swear Directly At Me.”

No, when I talk about the charms of “playing together”, what I really mean is the times when Mike and I sit down to watch while he plays the game. My interest in RPGs and puzzle games notwithstanding, there are still some games that I have no desire ever to play; but that doesn’t necessarily mean I don’t want to watch them. My favorite games to watch are the ones that are highly cinematic and story-focused (e.g. Uncharted 2); it’s like watching a movie unfold, and there are times when I almost forget that it’s even a game at all.

So it was that, a week ago, Mike rented the game Heavy Rain from GameFly. I’d heard a little bit about it, and it looked really interesting (and very pretty), so I settled in for what I expected to be yet another enjoyable night of gamer-controlled cinema.

And then I freaked the hell out.

It’s not that the game was intensely graphic or anything…those games I don’t even stay in the room for. But it was terrifying in other ways. Seriously, it felt like watching a nightmare unfold—not the one where you are being chased by monsters, mind you, but the one where you are chasing your kid through a crowd of people, calling his name like a crazy person, and despite your best efforts to push people out of the way you just can’t…quite…reach him.

And that was just the prologue. 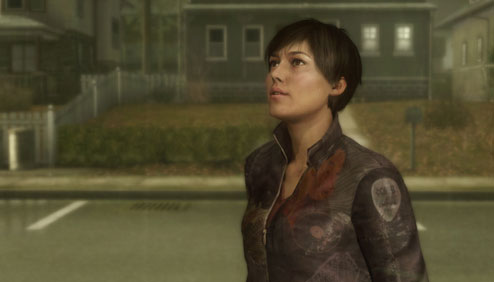 The threat of week-long insomnia notwithstanding, I really did enjoy watching Mike play Heavy Rain. Interestingly, the real lure of the game actually isn’t its writing (which is phenomenal), its premise (which grips you by the throat from the get-go), its graphics (which are stunningly beautiful), or its gameplay (which is highly innovative). No, the real draw of Heavy Rain is the fact that there are no guarantees that any of the main characters will succeed in their mission, let alone survive the game. There’s no “win” or “lose,” but everything has a consequence, and there is no way of knowing in advance what the “right” choice is or what the consequence will be. To put it succinctly, the experience of this game wasn’t so much that of watching a film noir in progress as it was that of living inside of one; and the game basically forced you to face all of the fears, doubts, uncertainties, and uncomfortable moral gray areas that confronted each of the characters.

It was interesting to play through such a game with Mike. Each choice became its own discussion point: To go forward or hang back? To forgive or reject? To kill or not to kill? What, after all, is the “right” thing to do in any situation, especially when the stakes were so high? We found that we didn’t always agree. Yet we also shared the weight of the decision-making process. Mike might have been the one pushing the buttons, but I was part of it, too. It was hands-down one of the most intense gaming experiences I have ever been through; but it was also a strangely poignant bonding experience. We fought and acted and chose while our characters went through Hell and back. We shuddered, we cheered, we teared up at times (well, I did anyway). We played the game together, and let it be what it was.

Looking back, I guess “Gamer Girlfriend” isn’t what it used to be; but I think the change was inevitable. You can’t have a column about your life and not watch it change, at least a little. Sometimes the humor of the relationship is the thing that matters; sometimes it’s all about the drama. Other times it’s just about finding the unexpected parts of you that are drawn out by what you say, what you do, and—of course—what you play.