I may not live in New Hampshire, the birthplace of videogames, but every now and then, some videogame news hits us here in California. Recently, the city of San Francisco has been hit by a videogame marketing campaign which is a surprising mixture of dumb and illegal.

See, there’s a videogame company in San Francisco named Zynga. After checking my sources (aka Wikipedia), I have determined that they made FarmVille and a number of other successful Facebook games that made the company $270 million due to their extreme popularity and (surprise!) illegal advertising methods. Their newest game is Mafia Wars: Las Vegas, which I’m guessing is based off the ending to Deja Vu II: Lost in Las Vegas.

The advertising plan they came up with to promote this game involved hiring Snoop Dogg to blow up an armored truck in Nevada. No, that is not fabricated news; they actually hired Snoop Dogg to blow up an armored truck with dynamite. Needless to say, Zynga is not known for its intelligent marketing decisions. This is apparent if you consider their advertising plan for San Francisco, which involved distributing flyers for the game in the shape of $25,000 bills. And by “distributing,” I mean “gluing to the ground.” 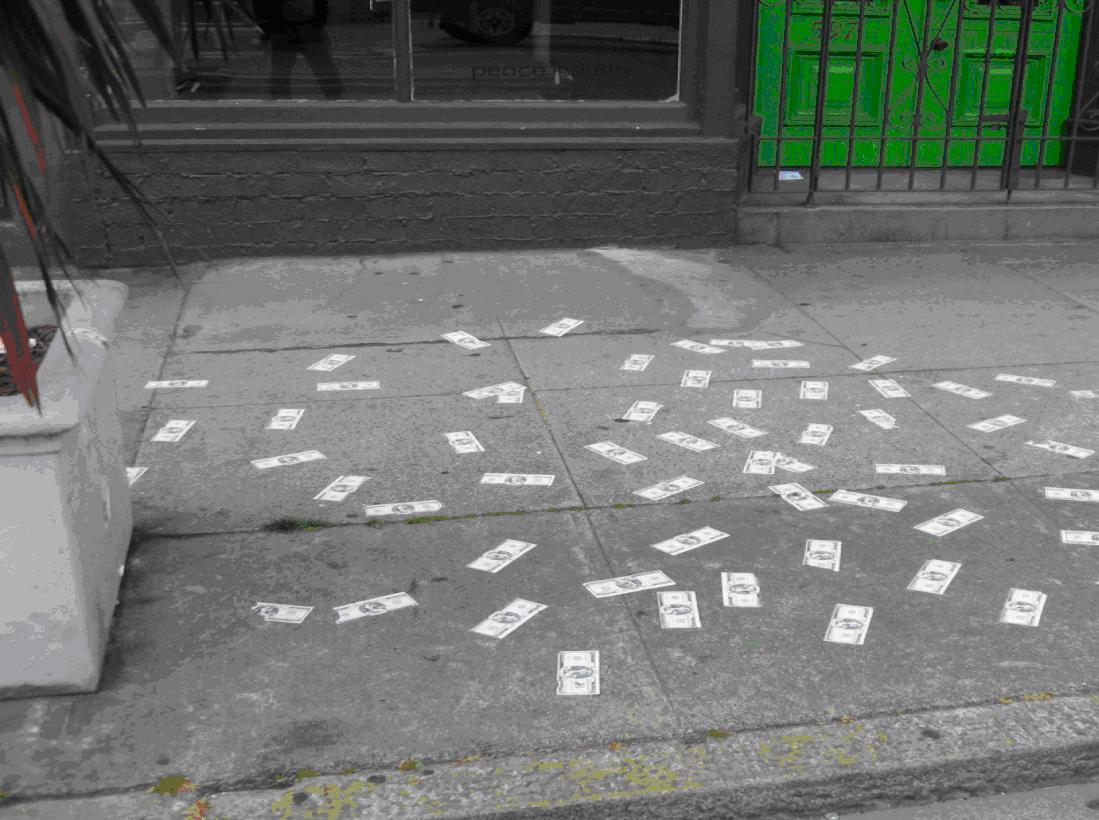 I imagine the advertising meeting for the idea went like this:

Marketer 1: People like money, right? Let’s make flyers that are shaped like money!
Marketer 2: But won’t the flyers blow away really easily?
Marketer 1: Not if we glue them to the ground!
Marketer 2: Brilliant! I can’t see any way that plan could possibly backfire!

No one was able to actually pick up any of the fliers in question, because, duh, they were glued to the ground. In fact, the city of San Francisco had to send a steam cleaner in to get the flyers off the ground and into the trash where they belong. The San Francisco City Attorney office is planning on taking legal action against Zynga and has already demanded full documentation from their marketing department. No charges have been filed yet, but I imagine they’ll be sued for defacing public property, counterfeiting, and littering.

Zynga responded with a prompt apology, offering to pay for all the city’s damages, and ha ha ha, I am joking. They are blaming a company called Davis Elen Advertising for the whole affair, because clearly, Zynga has nothing to do with advertising their own games. No one is sure what Zynga will do next during this legal drama, but given their track record, it will probably involve Snoop Dogg and a truck full of dynamite.