It’s Tommy, bitch! Legendary hero! So bold he takes on hordes of enemies against increasingly unfavorable odds and rattles off his favourite songs from albums recorded by The Beatles! He’s on a quest to save a princess of some description from an ancient evil of some description. Can you say that you regularly thwart the forces of evil and save princesses? Of course you can’t. But you, too, could be like Tommy, if you could:

1) Learn to shoot fireballs from your fingertips.

We’re talking pyrotechnics from the digits, my friends. The ability to gather air particles, rub them together and cause friction enough to create a spark and a flame from your very fingers. Tommy can do that. He even flings his hand as he does so, forcing the great balls of fire to travel across thin-air. Can you do that? Of course you can’t.

Can you jump over people’s heads? Well…can you? Of course you can’t. Tommy can. And he does it without any effort at all. It doesn’t plague him any to jump over three times his own height! (You can tell because his facial expression doesn’t change as he does so.) It comes as naturally as walking or eating healthily and exercising regularly.

Actually, is this all he can do? Man, he sucks! Alas, these are the only two abilities Tommy has. He doesn’t even have a life-bar. He might as well be the most awesome paper wall ever conceived, because when he takes a hit, that’s it. One hit kills. A legendary hero, and yet—he dies in a single hit. 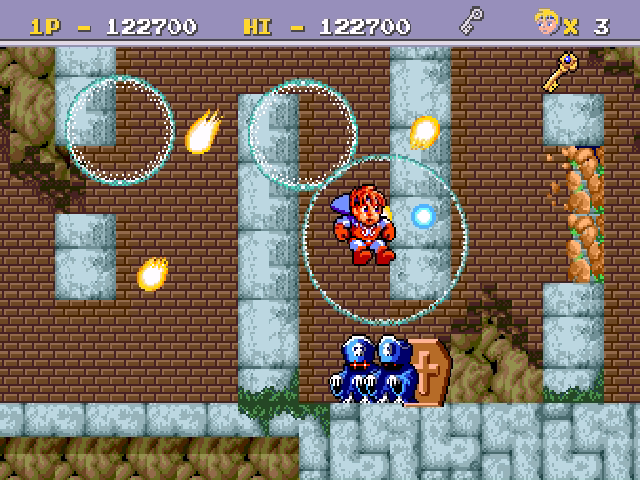 I treat it like gold dust, but Tonma remains a platformer so generic and bland that it doesn’t leave any lasting impression of any kind. It is (in all fairness) a basic platformer and shoot-’em-up hybrid that offers little replayability. Once you have the patterns down, it’s just R-Type on foot, though barely as good. Also, the difficulty’s pretty high for what looks like a “kiddo game.” Without a rapid-fire controller, Tommy just can’t shoot fireballs fast enough. The finest TurboGrafx-16 emulator (that money can buy) offers a very fast rapid fire (15x), which is when the game starts to become playable.

Tonma is a pretty game. The sprite art isn’t lacking in any way, except maybe on Tommy himself (his lips look constantly puckered up like he’s ready to kiss someone). Thanks to being such a rare release right at the end of the TurboGrafx-16’s lifespan, I expect you’ve barely heard of Tonma. Like all good games from this system, it has since made its way to the Wii’s Virtual Console, should you choose to purchase it, because Irem and Hudson could do with the dollars. Let’s face it—they haven’t released anything decent in the last two years, just rehashes of R-Type and Bomberman. 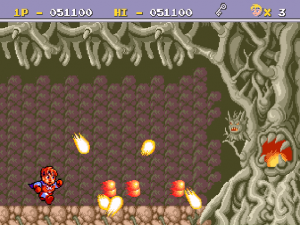 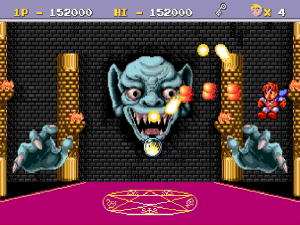 Sure, it’s a little bit of time-wasting, and it would probably appeal to the R-Type fan in you; but it’s mediocre at best and remains under the radar due to its simplicity and, well, “basicness.” Don’t get me wrong—there are times when this is exactly what I’m after, to break up the monotony of sixty hours of Rock Band (as there’s nothing more boring than that)—but there’s a limit to how much “hold button II” and occasionally “tap button I” that I can play before I lose interest.

Something in Tonma‘s favor is the witty dialogue between levels, where in Pen-Pen the announcer would say, “You’re the fastest Pen-Pen in the world!” or something. When you complete a level in Legend of Hero Tonma, the dialogue tells you that each level is suicide and that you’re far too inexperienced to complete it. That is actually quite witty, especially the first time, because it makes you turn your head and utter “what?” in sheer disbelief. I’m used to being praised or encouraged, but in Tonma, the between-level text is not very encouraging, and that I find very funny.

But sadly, Legend of Hero Tonma is just another game that fails to impress on the whole. It isn’t simply ignorable, but just passable. I did enjoy playing through to the end. There was challenge, and the difficulty spikes up at an all right speed. I suppose there’s nothing more can really be said about the game and what it offers. Tonma is a game that is avoidable, but not terrible. Your Nintendo Points are much better spent on Cave Story. 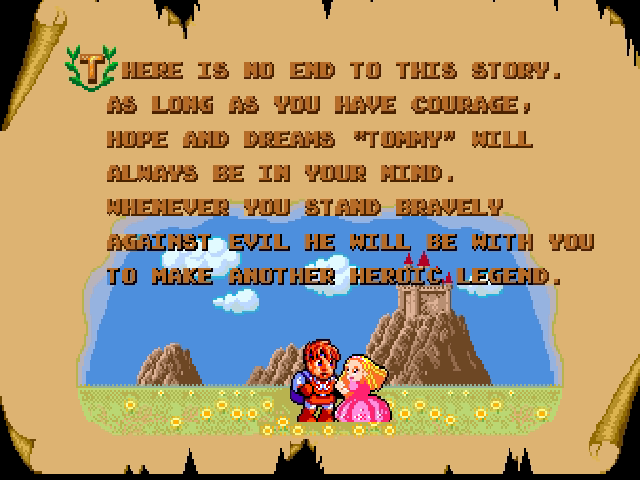 I had a funny line about a “heroic legend” with the princess, but I lost it (or it wasn’t funny).

When Legend of Hero Tonma originally came out, we had already been graced with Sonic the Hedgehog 2, Mortal Kombat, Kirby’s Dream Land, Indiana Jones and the Fate of Atlantis, and even Super Mario Land 2: 6 Golden Coins. Tonma came out the year that gave us Sonic the Hedgehog 3, James Pond III and Zool, so what chance did it have?

The release date, system, and simplicity of Tonma in general—that is what made it fade into obscurity. The TurboGrafx-16 was never really popular to begin with, and few copies of this game were released. For a “legendary hero,” he sure isn’t memorable.

Had this game been released three or four years earlier, it could have been incredible. Thanks to better games preceding it, Legend of Hero Tonma is just too samey to older platformers and doesn’t offer its own “special gimmick” like raccoon suits, blistering speed or wall-climbing. The whole game can be summed up in one simple phrase:”milk-and-water.”

Well, I haven't gotten to Brenner. I haven't yet made Beseiged. I'm only slowly progressing in the 30s and leveling my subjob is still worse than pulling teeth. I have, however, started to get a genui