It is very hard for me to review Sonic Adventure, because I grew up with this game. Or rather, I NEVER GREW UP, and I hold Sonic Adventure responsible. I was nine years old when I first completed this game, and I spent a lot of time with Sonic Adventure, raising the A-LIFE and getting all the emblems. Years of my life, gone.

Why have I stuck with Sega whilst they’ve tortured us with shitty games? Because they released Sonic Adventure. Sega was once great… Fine. Maybe not “great,” but they did prove that miracles happen. Will Sonic the Hedgehog 4 be the next one? I hope so.

Sonic Adventure was the first fully 3D Sonic game (because Sonic World doesn’t count, and Sonic R was a racing game). It sold very well, and helped shift a lot of paperweights (I mean Dreamcast consoles).

I love the Dreamcast, really I do! 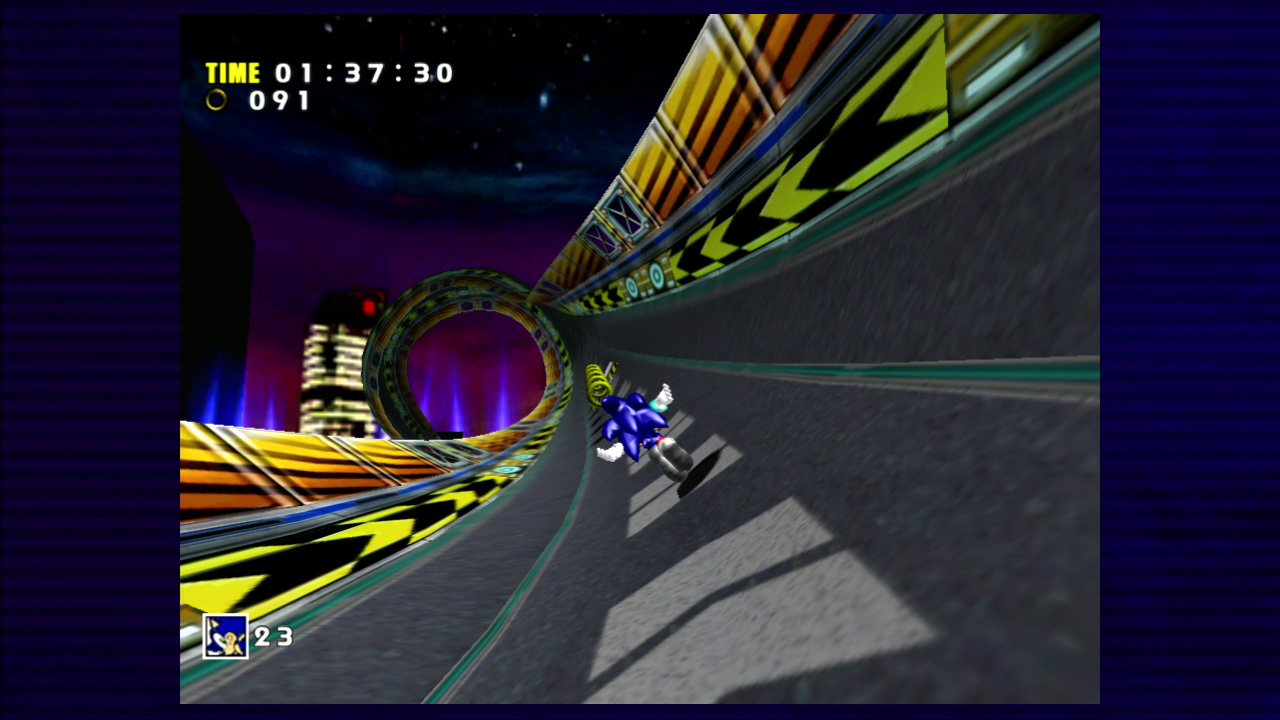 The story of the game follows the usual Sonic the Hedgehog formula, at least to begin with. The evil scientist Doctor Eggman is trying to collect all the Chaos Emeralds, to fulfill some grand evil scheme. And just for the record, in the Japanese canon, his name has always been Doctor Eggman. If you dare bring up the “Ovi Kintobor” argument, I’m going to ram your Fleetway issues so far up your colon that you’ll be shitting “Short-fuse the Cybernik” stories for weeks.

So, Eggman has got an evil plan, involving world domination and glimmering jewels. However, the normal story becomes more involved as you play each character’s episode. There is a recurring theme of madness and destruction within each episode, which bleeds into the final episode, when the story reaches an intriguing climax. As you probably guessed, it involves Sonic the Hedgehog turning into Super Sonic, and battling the Great Evil. Sonic then defeats it without losing a life (although that’s only because I’m awesome).

The great, vast evil was a neat idea, but then it was re-used for Sonic Heroes, Shadow the Hedgehog (only in part), Sonic the Hedgehog (2006) and Sonic Unleashed. It has become stale. It was a great idea the one time only. Also, a formula was developed based on the success of the Sonic Adventure series: lots of characters, lots of levels, a great soundtrack, and terrible voice acting. This formula too got old, and too quickly.

If you’re looking for a game that was SO awesome it gave birth to several mediocre sequels, then Sonic Adventure is for you. 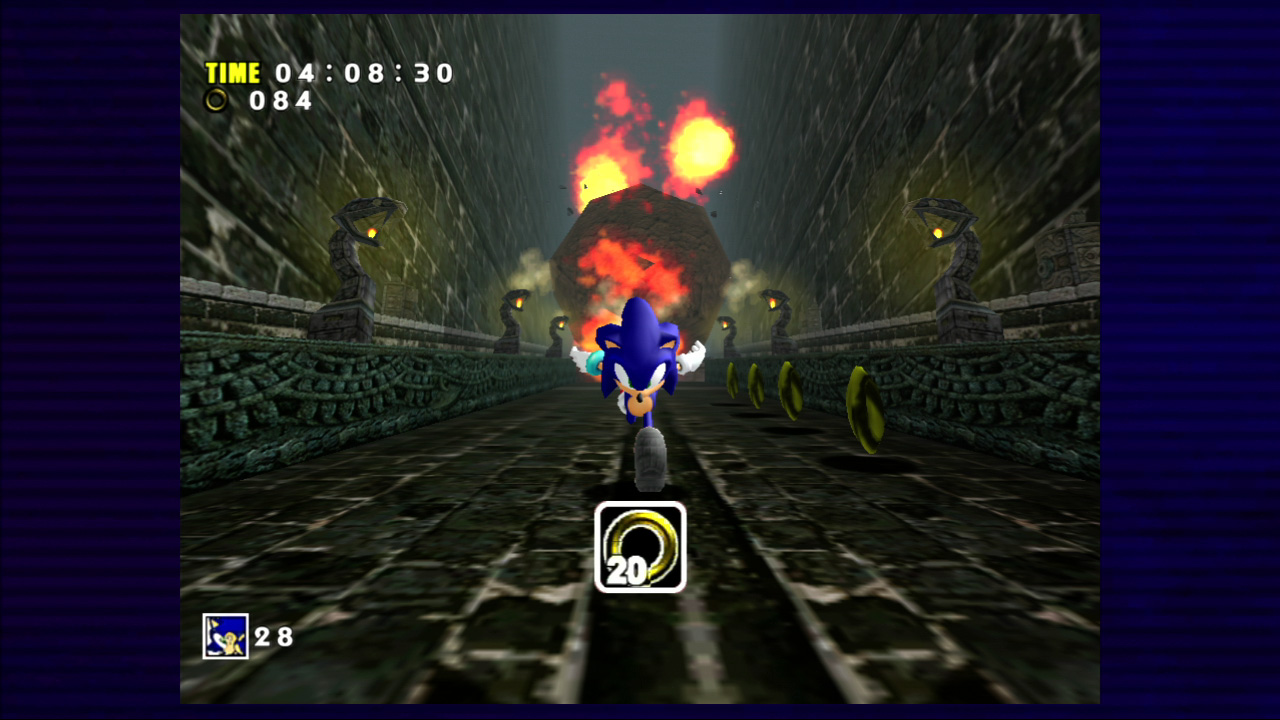 The screen size and borders leave incredible burn-in on my TV.

“When Sonic made the shift to 3D, that was when he became rubbish.” Yeah, whatever. That statement isn’t completely true. Sonic Adventure and Sonic Adventure 2 are absolutely fine games. They both have shoddy but hilarious voice acting. They also have incredible soundtracks that are mind-blowing and catchy. Glitch-ridden controls and “linear” adventuring do get in the way, but the nice visuals and really good storytelling make up for that. For all the areas where you can fault the Sonic Adventure series, there are an equal number of areas where it just plain rocks.

Nevertheless, Sonic Adventure does have issues that plague it hard. At times, it feels more like a large glitch than an actual game. This is because the game has been ported and then ported from the ports, and it wasn’t really that snugly developed to begin with.

Sonic Adventure retained almost all the bugs from the Dreamcast version when it was ported to GameCube and PC. The Xbox Live Arcade version dares not stray from the formula, maintaining all the original glitches and adding a few more. Also, the appearance of the PC bugs make it damn obvious that the XBLA version is a port of the PC port.

Sonic Adventure on Xbox Live. A port of a port of a spruced up port of a game first released in the very late part of 1998. That means they’ve had twelve years to fix the buggy Lost World “Swimming Snake” room. So why in the HELL does Sonic still fall through the snake? The snake he is SUPPOSED TO STAND ON? Jesus Christ, Sega, you make it HARD for me to love you sometimes. I RAGE when I start the Lost World level, because I remember that the snake is there. And that I have to clear that room without Sonic falling to his death, screaming “Narf!”. If I don’t, I have to do the whole room again.

Twelve years to fix the broken lift in Final Egg. You know the one I’m talking about, Sega. The one where you have to slow right down and jump onto the lift, otherwise Sonic just disappears and dies. Well that’s fucking cute. The exit to the next part of the level is a death trap if Sonic is going too fast. He’s the “fastest thing alive”; he shouldn’t have to slow down. 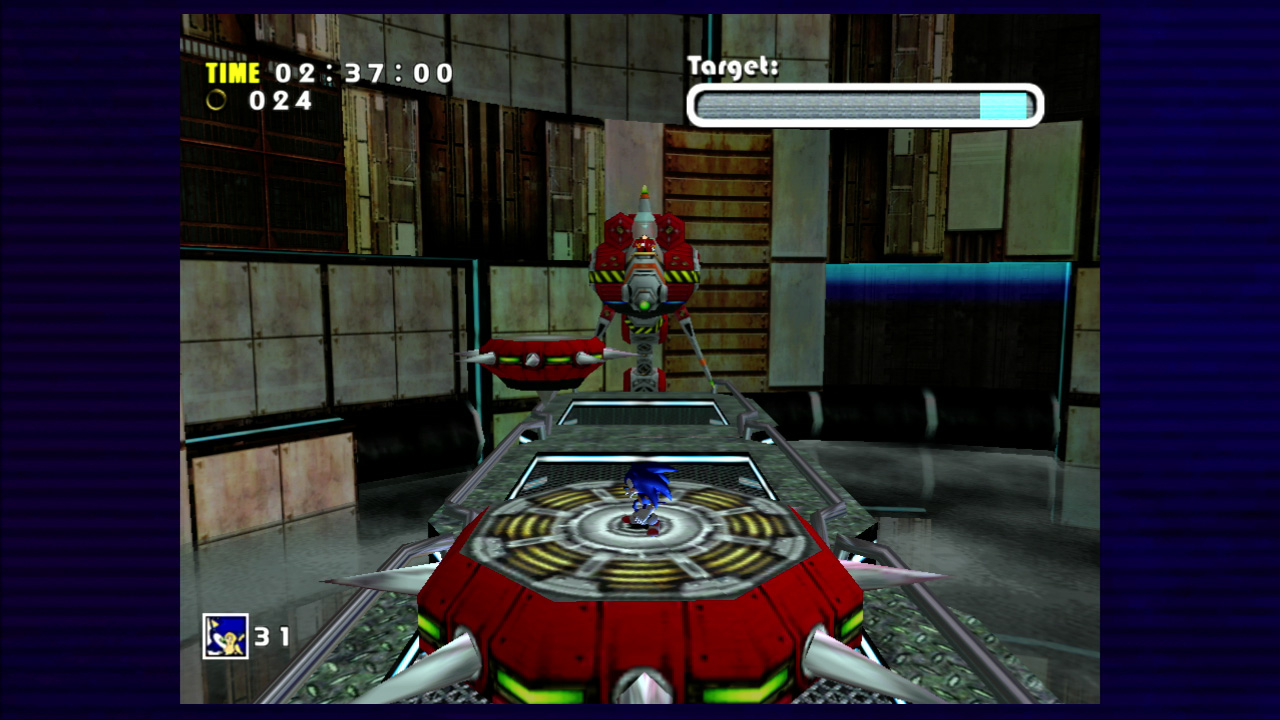 Trust me, you do get used to the aspect ratio eventually.

The most upsetting thing happened when I earned my first Achievement and scanned the full list. I saw the name “Big the Cat.” I wept. I had honestly forgotten about him.

Forgotten about his mental age of about six months.

Forgotten that his best friend is a frog who is always running away.

Big the Cat’s levels consist of him using a fishing rod to recapture his best friend. The “fishing game” engine is miles off from being barely playable, and I just don’t have the attention span required. Whenever you capture “Froggy” (which is an incredible feat all four times you have to do it), he proceeds to run away again, or get stolen/captured/kidnapped/digested by another character.

I’m sure if Big the Cat were to die in the next Sonic the Hedgehog game, not a single gamer would shed a tear.

Sega and Sonic Team have had twelve years to give us the content cut from the Dreamcast version. The missing level that Big and Tails were supposed to have. The missing boss battle in Sky Chase with the fire-breathing dragon. Content Sega and Sonic Team hinted would be in Director’s Cut, but never made it. All they’ve done is port a port of a spruced port of a twelve-year-old game. They have added nothing.

Sega and Sonic Team, pull your finger out. Your biggest fan demands it. If you can’t think of anything decent, just make a Sega Guitar Hero clone with loads of your songs. You’ll be minted.

I love the game to bits, but I can’t lie. It is a pretty bad game, but if it were a vinyl record, it would rock harder than a Geodude convention. This Live Arcade port boasts online leaderboards, Avatar Awards, and Achievements. Sadly, there’s no Sonic the Hedgehog suit for your Avatar, though I’d like to see that implemented as an unlockable in Sonic the Hedgehog 4: Episode 1.

We know we're getting a new game...but, what will be new about it?