Just got a hot tip from (appropriately enough) “Poor Player’s Paradise” author Christian Porter—if you act now, you can sign up to receive the first episode of Back to the Future: The Game for free when it comes out! All you need is a account with Telltale Games’s website (also free), and a desire for joy in your life. If you’re wary about what direction Telltale is going to take the series or aren’t sure you like “adventure games,” here’s your chance to test-drive the game risk-free. You can check out the offer here.  It’s PC (and Mac?) only, so have fun with those controls!

(I’m seriously going to feel like a jackass if it turns out that Telltale actually did fix their controls for this game.)

If you’re already sure you’re going to love the game, you can start pre-ordering it here, also for the computer, and also from Telltale’s website. (Watch out for a video that plays automatically when you open the site.) It’s $25, and in addition to all five episodes of the series, you get a free copy of Puzzle Agent. Also, Telltale is donating $1 from every pre-order to the Michael J. Fox Foundation for Parkinson’s Research. Super classy.

The first episode of Back to the Future: The Game is scheduled to drop this December for the PC and Mac, and shortly thereafter for the PS3 and iPad. It’s set six months after the events of the third movie, and according to this adorably nerdy concept art of Young Doc Brown, it may delve into the inventor’s backstory a little bit: 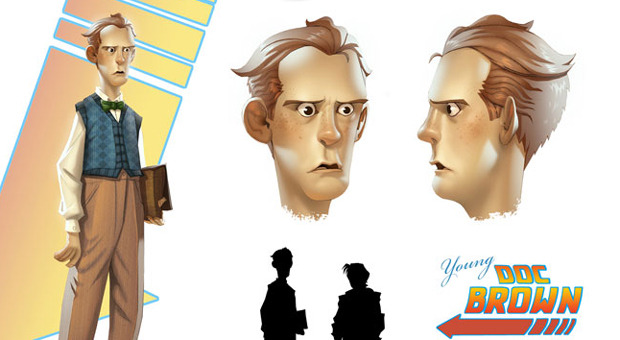 I mean, just look at him! He looks like he just got turned down for the Fish Enchantment Under the Sea dance.

By the way, are you sick of me reporting on Back to the Future: The Game news yet? Then get your own damned Internet website, because I’m going to keep talking about it until my keyboard disintegrates, or until Telltale confirms that it actually is a hidden objects game.

I mean, exactly. Watch this new trailer, and tell me that's not the first thing you think, too