Motion controls? Bah! Fancy-pants three-dee graphics? Who needs ’em? Back in my day, we felt lucky if we had two buttons to press and could tell the hero apart from an 8-bit ketchup stain. The crafty Croctopus corners his crock of collectibles in Coral Capers.

Sorry…I was channeling Cranky Kong there for a minute.

Muramasa: The Demon Blade is a current-gen game that plays by retro game rules—in other words, it’s got all the pretty and polish of a modern game while still retaining the no-nonsense gameplay-centric feel of the great 2D action games of yore. Muramasa is, without a doubt, the finest of the four Wii games I’ve ever played.

Egad! This logo is bigger than the whole review!

You want plot? Muramasa‘s got plot. Something about demons and blades. It’s pretty awesome. Half the time I felt like I had missed a cutscene or the backstory in the instruction manual; they throw around a lot of Japanese names, and I’m pretty dense when it comes to remembering people whose names don’t end in “Man.”

The plot develops differently depending on whether you choose to play as Kisuke, the bug-eyed young man with no memory of his past, or as Momohime, a woman who’s really a man inside a woman’s body—her soul has been ousted by a dude named Jinkuro, who lost his body and only exists as a spirit now. He’s a soul man. 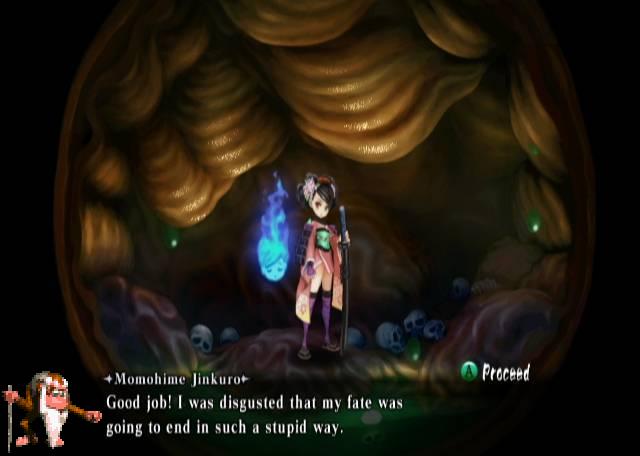 What, by someone shutting off the game and forgetting about you? Good riddance!

Kisuke and Momohime are both practitioners of the Oboro Style, which is either a swordfighting art or a magazine for teenage Japanese girls. Wielding “demon blades” forged by the spirit of the great Muramasa—a renowned swordsmith and world-famous pastry chef—Kisuke and Momohime travel the forests, mountains, caves, forests, villages, temples, and forests of feudal Japan in search of plot, XP, forests, and the next save point.

They also slay lots and lots of ninjas. Assuming “slaying” is something you can do to something that’s not a dragon. Just in case, they slay a dragon. Also, undead soldiers, spear-happy monks, funny-looking demons called Oni, blue goo monsters, hopping umbrellas, devious pheasants, and a building-sized puppy dog. It’s a wonder they never tell you about these things in your Japanese History class. 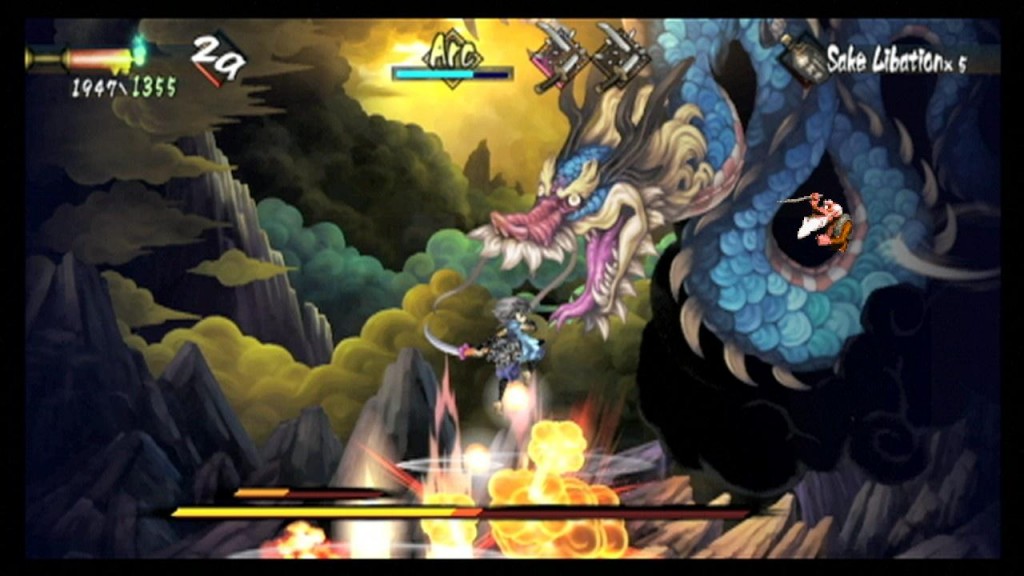 Is that supposed to be a dragon? Feh! It’s not even green!

Muramasa has three main gameplay components along with a host of minor ones. The beautiful trio of combat, exploration, and collecting sharp objects (called “swords”) is one that makes this diehard Crystalis fan immensely happy. There are multiple paths to take and (poorly) hidden treasures at nearly every turn. Battles are challenging, meaningful, memorable, and make you feel like the awesome rockstar ninja you really aren’t. By the end of the game you’ll have as many as 108 different swords to choose from, each with its own unique look, special ability, and not-so-secret power. 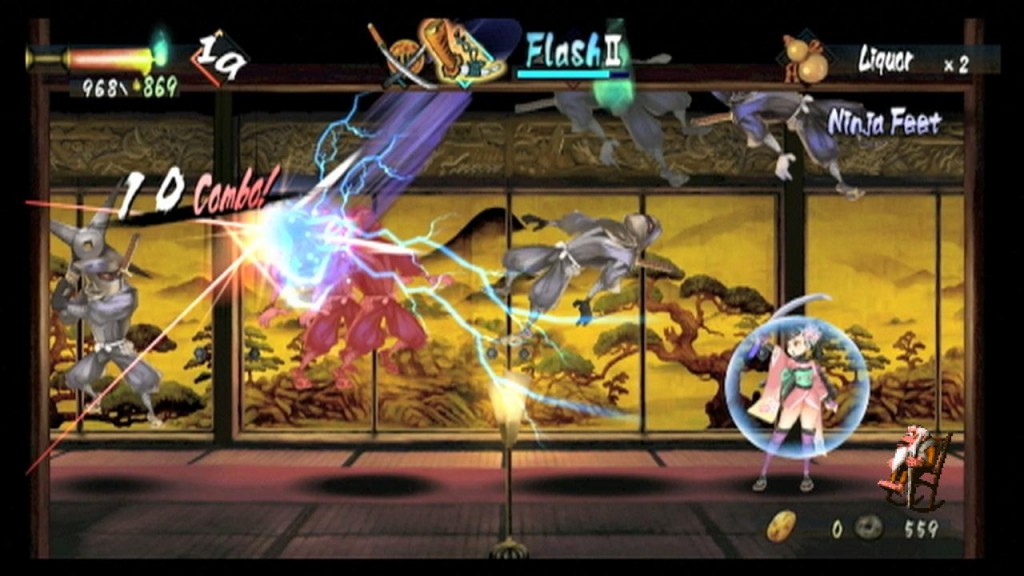 Why, with that many people on the screen, I’d be surprised if the game could run fast enough to play at all!

I get incredibly antsy when a game forces me to use the same weapon all the time, so you can imaginine that Muramasa‘s vast arsenal of swords makes me downright sedated. No, wait—elated. Swords come in two general styles, short and long. You can either take forever to dish out a lot of damage to multiple targets with a long blade, or tear individual enemies apart with quick little (metal) paper cuts from a short blade. Short and long—hey, just like Morse code! Maybe the game’s name was mistranslated and is actually Morseamasa?

No? Too much of a stretch?

Anyblade, the swords you collect grant you anything from an increase in strength to gradual health restoration to a resistance to being SET ON FIRE. Mommy, I want a sword now. Your weapons also bestow the power to execute a wide array of special moves, including a windmill-style spinning slash, releasing spheres of electricity that chase your enemies, and briefly becoming intolerable. Erm…intangible. 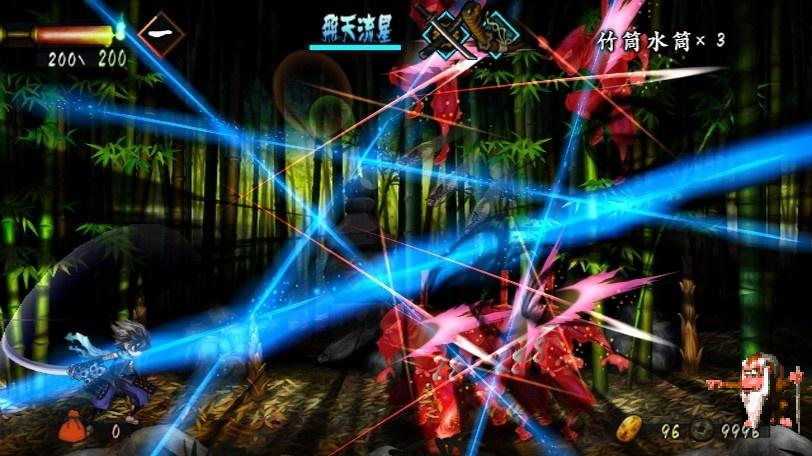 You call this a screenshot? Looks more like someone shot the screen, if you ask me!

Blades are gathered by winning major boss battles, but you can also forge new blades derived from the ones you have using the souls of your enemies. Yes! These “demon blades” run on soul power, losing energy as you block attacks and bring out special moves, and recharging as you leave them in their sheaths or procure more souls—typically by killing enemies or plucking souls from trees. You think I’m kidding. Anyone who ever told you, “souls don’t grow on trees” is a half-wit and also probably a soul-stealing monster.

Combat is approximately as challenging to pick up and master as any Super Smash Bros. game; though you can practice complex swordplay and evasive tactics both on the ground and in the air, you’ll never find yourself pressing too many buttons or attempting complicated button combos that require a flowchart and/or PhD to understand. 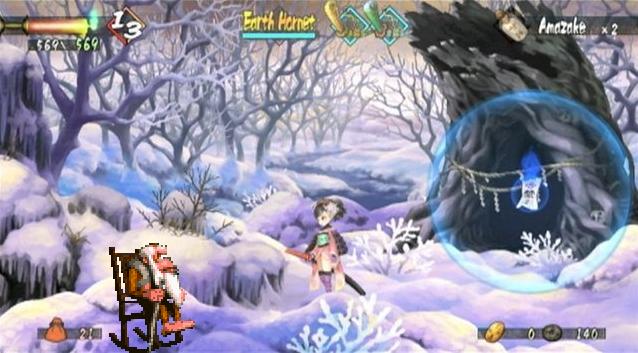 Harumph! Look at that wasted background detail! With all that effort, they probably forgot about the gameplay!

Even if you do find yourself outclassed and get killed off, you restart right where you died with absolutely no penalty whatsoever, and any items you used during the failed battle are restored as though you never used them at all. Not that I, uh, would know what happens if you Game Over. (I tested this extensively.) Taking into account Muramasa‘s multiple difficulty modes as well, you’ve got a game that is very forgiving to novice players while not taking anything away from the veterans. 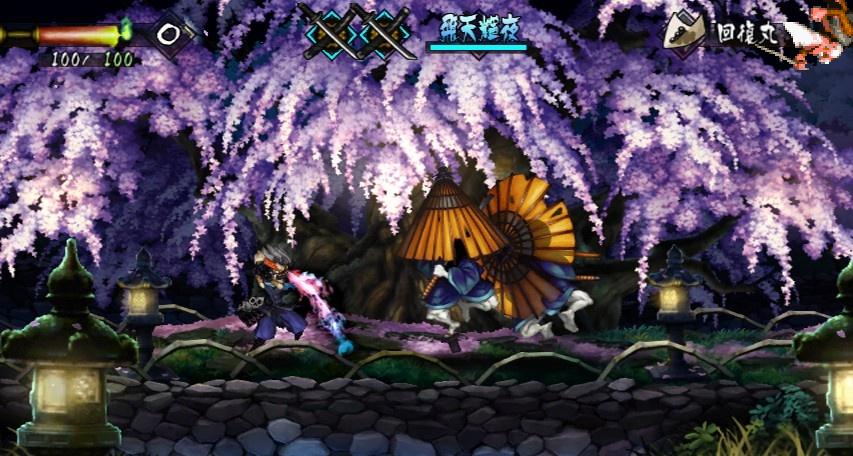 Now, wait just a minute! These words aren’t even in English! Who’s the lazy bum responsible for this picture?

So there’s multiple difficulty modes and two characters with separate storylines and 108 blades to collect, right? Did I mention there’s also optional battle gauntlets for prizes, and multiple endings, and that one of the difficulty modes gives you a maximum of one point of health? I can’t even get out of bed in the morning without being attacked by a hopping umbrella, let alone make it through an entire game without getting hit!

Insane-o difficulty mode aside, if you want to get Muramasa to that coveted “Complete” status on your Backloggery, you’ll need to spend more time backtracking than you did in Metroid Prime, Spirit Tracks, and Neutopia combined. Actually, I can’t vouch for Neutopia, but it came up in a GameCola archive search for the word “backtrack,” so I’m confident it’s a perfect example. 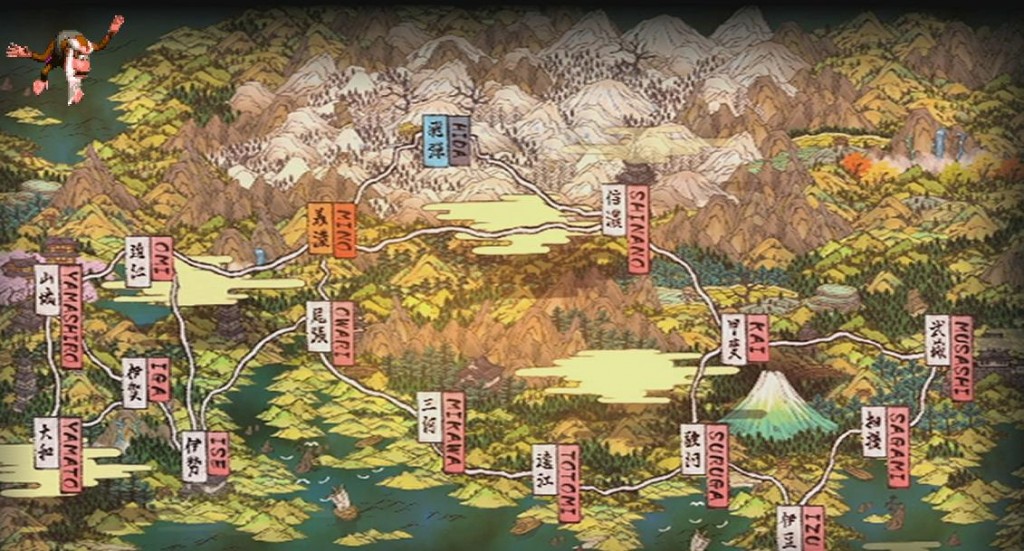 It’s a shame they didn’t label a landfill on this map, because that’s the first place you’ll want to go after playing this rubbish.

I attribute this near-excessive backtracking to the fact that Momohime and Kisuke visit the exact same locations in their respective quests, though they start on opposite sides of the map to superficially diminish the feeling that you’ve met that tofu-peddling child by the river before. At least each major area on the map has two different paths leading to completely different bosses, one for each character…though once you beat the game, you get a sword that grants you access to the other character’s bosses as well, and wouldn’t you know, there are new treasures to be won by fighting them.

As if that weren’t enough, several screens look nearly identical, with only minor graphical touches to differentiate them. By the end of the game, you may grow nauseous at the very sight of trees. Fortunately, the visuals themselves are quite luscious and the characters look like they’re taken straight out of a high-quality anime, so you may actually appreciate being forced to march back and forth through the same places because you’ll have plenty of time to ogle the beautiful windswept fields and gorgeous, nausea-inducing trees.

And just what is this doing here, hmm? In my day, we wouldn’t stop to take a bath until we’d finished the game!

On the subject of nausea, I’d like to point out that you restore your health during and after battles by throwing down food and drinks, all of which are alcoholic. There’s nothing like brandishing a sword in one hand and stuffing your booze-reddened face with roasted squid in the middle of a storm of shuriken, let me tell you.

Eating and cooking actually play an important part, as you can gather ingredients to restore health and gain certain wonderful benefits from, say, chowing down on a home-cooked shabu-shabu hot pot amidst the burning corpses of your enemies. Shabu-shabu. There are also humble little restaurants scattered across the land where food is placed in front of you and you press the A button to take a bite, like you’re really eating it! I live vicariously through Muramasa because I’m a hopeless bachelor and, despite my best efforts, failed to open a can of Spaghetti-O’s the other night for my dinner. 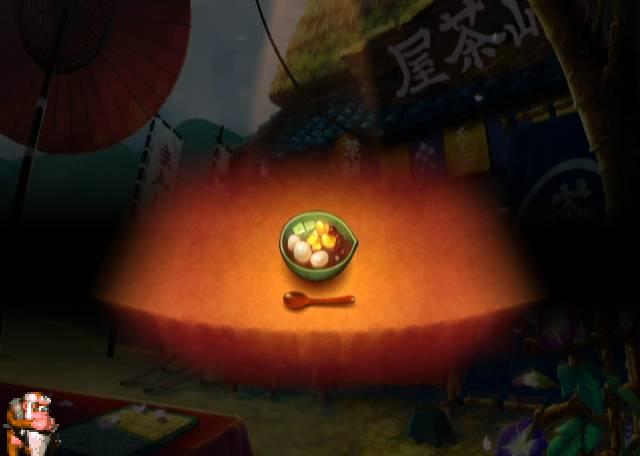 You had better eat all of that—there are starving digital kids in digital Africa, you know.

I’m usually not the type to get lured in by the pretty and polish of modern games, but even when the gameplay becomes a little repetitive, Muramasa is an exquisite experience not just because of the alluring visuals but because of the music. The soundtrack oozes atmosphere and screams “Japan,” though without all the unpleasant oozing and screaming.

There’s a nice variety of realistic-sounding instruments (and big burly men going “ooh” and “hah!”). The heavily layered music seamlessly transitions into something more intense when a battle begins, flawlessly subsiding to its previous level once the battle is over. Muramasa‘s breathtaking soundtrack is easily up there alongside those of Chrono Trigger, Super Metroid, and The Adventures of Rad Gravity Chip’s Challenge Chrono Trigger. 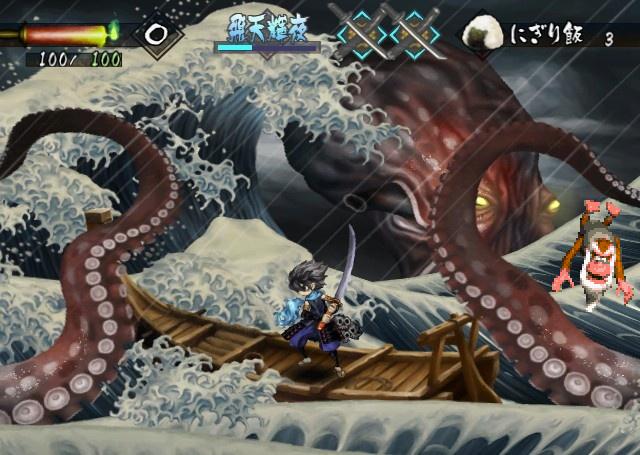 I’ve been everywhere in the game, and I can tell you this monster doesn’t exist!

Now, shoo! If anybody was really interested in this game, they’d be off playing it now instead of reading about it! I’ll bet you just got bored and skipped to the end of this sorry excuse for a review. Go on, now, before I give you a good thrashing!

Zynga is making more games which resemble games from other companies.