Deathsmiles has only just come out where I live. For a game first released in 2007, that’s pretty bad going. But to be fair, Dead Island is currently in the spotlight, and I first saw prototype screenshots for that game around about the same time, too. Even four years in development ain’t as bad as Duke, who’s finally arriving in May.

As a citizen of an unimportant country (i.e. any country that isn’t your country), I have found that it has taken a hard toil of petitions and prayer to get Deathsmiles a release here. As an apology for the belated release, the game comes with the complete soundtrack (in WAV format—grr, that means converting and tagging before it can be iPod’d) and a collection of desktop accessories, wallpapers, pointers, and everything else that would have been cool back in 1998, but isn’t now. It’s not much, but it makes me feel loved, even if Europe got a game last, again. 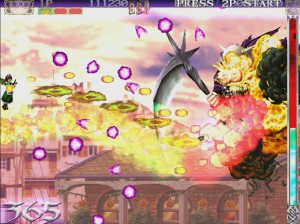 First key thing to note about Deathsmiles is that it’s yet another game in a long line of shooters, a genre so saturated it makes Guitar Hero (God rest its soul) look like a one-shot TV comedy of only six episodes. It’s no joke—there’s a shooter everywhere you go, and Japan’s got it bad; almost every Xbox 360 game that originates from over there is a dating sim, RPG, or shooter. They’re running out of ideas, or rather, they ran out of ideas whilst the Super Famicom was still top-spec.

But being a shooter doesn’t necessarily weigh Deathsmiles down any—it’s just that if you’ve played a lot of shooters recently (like I have), it makes appreciating the little features a very difficult task.

Deathsmiles has a rather interesting storyline. Like many other shooters, the story makes Noby Noby Boy look normal. The story focuses around several young girls who are transported to another world by blinding white flashes of light. The world they travel to, Gilverado, has some kind of phantom feature causing everybody who winds up there to develop magical powers.

There are four playable characters, and as luck would have it, the first character I chose to play as was the weakest. Don’t care, Casper has an awesome name. They all have particular abilities and different types of bomb attacks, which makes playing the game through as each character, which is required to get both endings, relatively painless. 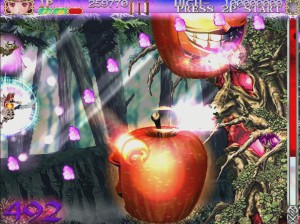 The game consists of six levels (seperated into three chapters), then a fourth chapter, which can usually consist of only one or two stages. Each stage has a single boss, with the exception of bonus stage, Gorge, which has a miniboss part-way through.

While you are playing, you get to choose your difficulty level, indicated as either Level 1, Level 2, or Level 3. As you turn up the difficulty, the enemies spew out more bullets, and that seems to be the only real difference between the settings.

The DLC Japan had to pay for, which is integrated into all releases outside Nippon, adds an extra character (who can only be selected within the new modes that the DLC adds). It also adds an extra stage within the new Mega Black Label modes, with a new boss battle, which can also be played before facing the final level.

Bonus marks go to Deathsmiles for its soundtrack, and its redrawn high-definition sprites in the spruced-up added console modes. Marks are lost, however, due to only the non-background graphics being redrawn, and the game itself  remaining in 4:3 resolution (meaning that to get it full-screen on a HD TV, you need to stretch it). 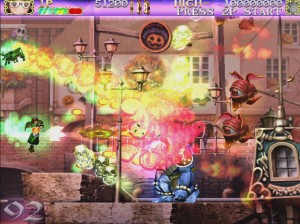 Deathsmiles does the job, and it fills the occasional half-hour to an hour lust to kill people with laser beams. It offers enough modes to make it  replayable, but as far as games go, this is definitely one you won’t enjoy if you don’t enjoy shooters. If you do, and you can play them as relentlessly as I can, then you pretty much want this game, ’nuff said, really.

I continue to support Cave in the hopes that future games of theirs eventually make it outside of Japan. The upcoming NIN2-JUMP looks like it might be interesting, and like all Live Arcade games, it’s bound to see release across the world. Cave‘s first Live Arcade title, Guwange, is well worth a shot if you enjoyed Pocky & Rocky 2, which I have previously implored you to play.

So long as Deathsmiles sees a decent worldwide success, Deathsmiles II: Hell’s Christmas has a pretty good chance of getting a release outside of Japan, too. Double hopefully, this will speed up Otomedius Excellent‘s American release and trigger interest in a European release, too. Otherwise, I’ll have to permanently move to Japan.

A look at why the three main Phoenix Wright characters will be forever dateless.