Recently, I was reading an article about the 100 Lamest Gaming Industry Clichés, and I noted that I have used about 80% of them over the course of all my previous reviews with GameCola. This is the point in my review where I’d have normally said on with the show, for example.

Guwange is a shooter developed by Cave, the company that brought you Deathsmiles. It was released in the arcades, and until the recent Xbox Live Arcade launch, the game was entirely in Japanese only (besides the English-speaking Mikoto), and only available in Japan. I appreciate Cave taking a few minutes out of their busy schedule of not releasing enough games outside of Japan to actually translate and publish Guwange in the English-speaking territories. (Being on Xbox Live Arcade helps. Had this been a boxed title, a worldwide release wouldn’t have even been considered.)

As happy and thankful as I am for another Cave shooter being made available to me, though, I’m also instilled with rage, because this game is about as fair as Scarborough. The enemies are veracious, ferocious freaks, malaproping waves of horrible, shimmering bullets who can only really be described by using visual representations that we in the industry like to call “screenshots.” (This is when I would have said on with the show, again.)

The first level is somewhat plausible, but we do have to suspend a lot of disbelief. All right, I can just about believe that a seventeen-year-old Japanese girl can, with the aid of a magical fox, lay waste to entire armies. I can also give Cave the benefit of the doubt, because we do not know enough about ancient Japan to be able to say whether or not magic existed. I’m even willing to accept that enemy soldiers could shoot laser beams from their bows as opposed to something normal, like some bloody arrows or something.

It’s only after a boss battle with a transsexual dancer (it’s true, ask Wiki) that the game suddenly becomes extremely implausible (as opposed to just mostly). Our first truly disturbing enemies are the cyclops-whales. They spew out bullets too, funnily enough.

Shortly thereafter, we meet the spiders who wear masks. Guess what?

Heads in jars and magic lanterns then make an appearance. Making sure that they are not outdone by the rest of the enemies in the game, they too generate a vast number of bullets. Great!

Actually, we have some official concept art from Cave explaining how these heads got inside the jars.

I don’t know which is more disturbing: that little cartoon, or seeing that enemy drawn in a cute anime style. You would hit that, right? 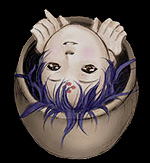 There are unhappy men inside wooden trailers. They hurl bullets (and possibly abuse) at the player, as you would expect.

If you have been thinking, “so far, so tame,” then I congratulate you on not finding these hideous-looking enemies even remotely frightening. But that is all right, because the second most hideous creature in the game then makes its appearance.

After this, we really get a moment of silence on the weirdness front, which is great, because it will take me a long time to recover from the Cat-Spider. After a fairly sane level, we even get to fight a sane-looking boss! It’s just a tank that looks like a castle; I think we’re fine now.

Spoke too soon. There’s a cyclops living inside it. And wouldn’t you know it—he vomits bullets. Story of my life.

Well, in-between Cyclops Tanks, Cat-Spiders and questionably cute Severed Heads in Jars, I don’t really know what can be done to top all of this. We have another sane-looking level, with rather normal enemies compared to those mentioned above. Even the boss battle is against just a standard ninja. Thank you!

Well, that is until he transforms into The Incredible Hulk. I just had to open my mouth and jinx it.

Wait, is that a portal to HELL?! Oh shit. We’re not going in, right? We are? Smashing.

Is that a magician floating above a giant brain? I can only dread where this is going. Also, are those Maltesers? They’re emitting deadly bullets too. Ha! Who’d have thunk.

Once the magician’s dispatched, we can all go home—JESUS, what the FUCK is that?!

This being, my friends, is Guwange-sama. It is a mutant baby. It shoots bullets at you. Not only is it going to PWN you like you’ve never been PWNED before, it’s also going to disturb the shit out of you.

After Guwange-sama, the game is effectively over. You fight the magician one more time, and then it’s all done. Rinse and repeat for the other two character Achievements, and realise that the rest of the Achievements will have you crying blood.

This game is bloody hard, and bloody tough, and bloody clot. I love it to bits, but in all honesty, it’s turd. Hey, go ahead and play Guwange; it’s your funeral. This or Deathsmiles? Totally Deathsmiles, without a moment’s hesitation.