In the midst of any battle there are always warriors who stand tall and rise above the rest.  Bullets, arrows, and bombs do not strike fear into their hearts because these men do not fear death. They are, however, only human and on the battlefield there is, and always will be, one great equalizer. Poop. Even General Patton would turn tail and run from a barrage of poop. Death, after all, is quick. Poop, on the other hand, can take days to get out.

Equally epic battles are fought when poop stops being a weapon and starts being the enemy itself. A choice to have Taco Bell for dinner before a long drive home can turn your own colon into a veritable battle of Iwo Jima—your victory resulting in your continued ability to have passengers in your car, your defeat resulting in your car detailer lamenting their choice of career.

The games in this Heap will deal with games brave enough to tackle either of these scenarios.

Okami is one of a handful of games commonly sited as a fine example of videogames being considered art. The storyline pulls liberally from Shintoist legend and the art style is heavily derived from Ukiyo-e woodcut style of Japanese art. In fact, the only difference between Okami and the works of Katsushika Hokusai is that The Great Wave Off Kanagawa lacked imagery of a dog spraying diarrhea all over the Japanese countryside. MOST PRETENTIOUS POOP JOKE EVER!

Those of you who played through Okami may now be thinking that there isn’t any defecation in this game and think I included it on this list solely as a pathetic attempt to make myself sound smarter by referencing classical Japanese artists. Well, you’re wrong.

About the first part.

If you played through the game and aren’t a sucker for completionism you might have missed a few of the more expensive fighting techniques in the game. The cost of average techniques max out at about 60,000 yen in the game except for two choices: Golden Fury for 100,000 yen and Brown Rage for a whopping 2 million yen. You may not have realized what these do until you considered the names in the context of this article. Yes, Golden Fury allows you to urinate on your enemies and Brown Rage, you guessed it, launches a torrent of dog shit out of Amaterasu’s brown eye. Videogames are truly art.

Outside of the awfulness of all their NES games with the annoying, tinny music, Rare doesn’t often offend. They even played things pretty clean in their golden age. Banjo Kazooie was a good time for the whole family and GoldenEye didn’t feature excessive violence or blood. Who could have known that a much more blue sense of humor was brewing inside of the developers at Rare and exploded out of them all at once to form the bastard child of Banjo Kazooie and Tourette Syndrome that is Conker’s Bad Fur Day. Hard-drinking squirrels, misogynistic steel crates and a recreation of the Holocaust with teddy bears are great and all, but where’s the poop?

It looks like it’s our lucky day because Conker’s BFD has poop en masse. Specifically there is a notorious level made entirely of fecal matter in which you encounter The Great Mighty Poo, an anthropomorphic pile of feces with sweet corn for teeth who sings an opera about how he is going to murder you with his shit.

Here’s a video playthrough of the entire operatic boss fight. It’s entertaining as well as educational, I learned that “bab,” “tish” and “tag nut” are all some kind of fecal slang that I wasn’t familiar with before The Great Mighty Poo.

Digimon has always been the less-fun, less-popular, less-talented adopted brother of Pokémon. Pokémon gets all the attention Digimon craves so it lashes out. Where your sibling lashed out by wearing all black clothing, eyeliner and pants with entirely too many zippers, Digimon went a bit lower brow and just started throwing its shit all over the place. Specifically, a Digimon named Numemon throws feces as a weapon, and one called Sukamon is a living pile of dung.

Truth be told, I haven’t played much Digimon and know the games solely from a Tamagotchi-type version of the game that my friends and I had in high school.  Hm, now that I look at that sentence I think I realize why I didn’t get laid very much in high school. Anyway, while my other friends had Digimon that shot missiles, skulls or boxing gloves, I had Numemon who would fling neatly stacked piles of LCD dung at his enemies. I couldn’t have been happier.

Blue Dragon is what Final Fantasy would be if it were under the control of a DragonBall-obsessed fecalphiliac. The main storyline of the game is poop-free. An evil old guy with limitless resources decides to terrorize the hell out of the world because he can, and you have to stop him. Despite there not being any logical place that defecation would play into that storyline, for some reason, it’s all over the game.

Where most RPGs will start you off with a simple fight against a slime or a rat, Blue Dragon starts off the game with one of your first enemies being a Poo Snake. As the name implies, it’s a giant turd pile with a snake head who wears gloves and boots. Stronger variants of the enemy appear throughout the game, including the rare Golden Poo Snake, which is good for grinding XP and Gold. The very hardest enemy in the entire game is an optional boss named King Poo Snake, who looks like the other Poo Snakes only much larger, metallic-looking, and he wears a crown. His attacks, somewhat disappointingly, are not poop-related.

Top Of The Heap 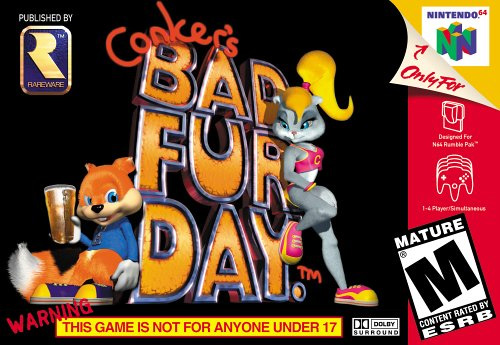 Every moment of the game is crude in the most juvenile boobies-and-farts way possible, but damn if it isn’t one of the best games ever put out for the N64. What keeps the juvenile crudeness of the humor from getting stupid and tiring is who’s delivering it. Poopy, pee-pee, wiener jokes aren’t all that funny when people make them, but if they’re being made by suicidal pitchforks, horny bumblebees and gruff cogs, the absurdity and kid’s aesthetic give it a little something extra—like a videogame version of Wonder Showzen or TV Funhouse. Combine that with a flawlessly crafted adventure and you’ve got a game that deserves to be on the top of any Heap.