“…and the talking leads to touching, and the touching leads to sex, and then there is no mystery left.” 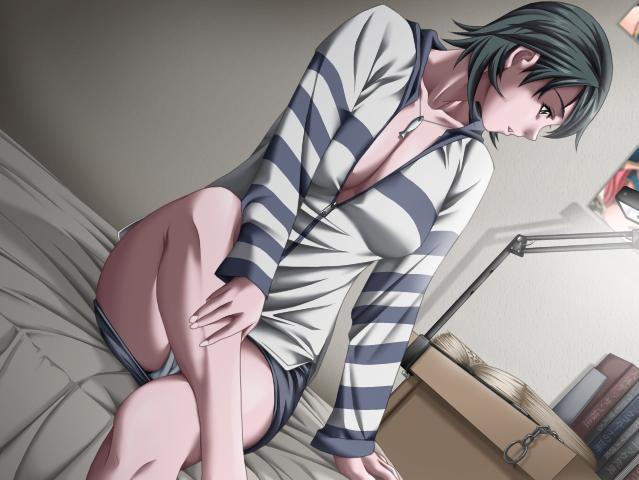 I thought to write an article chastising you all for being such terrible, terrible people for what I now refer to simply as W.C. 2011, but a few things have happened that have set me on a different course. One, it’s been months since that tragedy, and, as with any months-old tragedy, I’ve mostly forgotten about it. Two, I have something much more future-relevant I’d like to talk about.

First, just to get this out of the way: yes, this is the next voting cycle for my reviews, so please vote via comments. More details later.

Now then, in case anyone unwittingly stumbled into this article and is so far lost, lately I’ve been reviewing a very specific type of game, with more (M)ature content. And by M, I of course mean AO.

Back to the more future-relevant thing I was talking about: my nagging issue with these AO dating sims. The issue I have with these games is that they are all just unsexy. Yes, I know that is super obvious to a lot of you who’ve read my articles, and maybe completely untrue for the rest of you, but hear me out on why.

The subject matter itself is not my issue (OK, maybe it is, a little), as much as the presentation. Regardless of what these games are about, they all share the same misguided formula: intro, sex, sex, sex, sex, sex, sex, sex, sex, finish. And then repeat until the end of the game. OK, maybe that doesn’t sound all that bad, but I swear I’m building up to a legitimate point.

Let’s liken these games to real women. Yes, dropping your dress in the first 10 seconds of meeting someone is a great way to be super popular with creeps, but any self-respecting woman knows that’s not what sexy is. Sexy is about what you don’t show, what you don’t do, what you hold back. It’s about connecting with the imagination, and purposefully leaving blanks to be filled in. A woman who understands sexiness can, with a few looks, a light touch, or a whisper, sell a fantasy that lights a fire in a man more intense than anything explicit images might elicit. (For the record, this applies to men as much as women.)

These games should work the same way, right? They are comprised entirely of still images with text, so they must rely on imagination. Let me answer myself with an example:

You’re eating dinner in a romantically lit restaurant with your girlfriend. She slips her foot out of her shoe and playfully brushes it against your leg. She then leans in, puts her hand on yours, and tells you she’d rather have dessert back at her place.

The girlfriend in Scenario 1, through subtle hints, has directed her boyfriend’s thoughts exactly where she wants them to go.

The girlfriend in Scenario 2 also definitely got her message across. However, in being crass and overly explicit, she likely killed the mood as well.

Scenario 2 is exactly the problem I have with every AO dating sim I’ve played. The scenes are almost aggressively overt. It’s just explicit sex scene after explicit sex scene, until the game becomes thoroughly unsexy and…well, boring. You can only have your girlfriend slap you with wet panties so many times before it stops being cute and just becomes tiresome.

Maybe I haven’t made a very convincing point, and perhaps I’ve actually missed the point of these games, but, regardless, I have a dream and a request I would like to leave you with. My dream is to play an AO dating sim that I feel actually understands even one small thing about what it means to be sexy. It doesn’t even have to be carried throughout the entire game; just one little part would be enough.

My request is that you, the readers who will determine my fate with the next round of picks, keep my dream in the back of your minds…and maybe don’t pick a game where girls poop in buckets.

Now that that’s off my chest, on to voting for the next round of games for me to review! To recap, the first winners were:

Just go back to http://www.jastusa.com/shop/, check out the library, and vote for the top three games you would like to have me review. I will then tally them up in a few weeks and declare the winners!

I will be submitting a special bonus review of Lightning Warrior Raidy II, so that is not a contender. Anything else that hasn’t been reviewed yet is fair game!

Don't panic. It's not like this happened before and they were coerced into developing games for bad hardware.