A wise man once said, “mo’ money, mo’ problems.” This may be true in real life, but how does it stack up in videogames? Perhaps it would be better to say “mo’ types of money, mo’ problems.” If you’ve played enough games, you’ve probably come across a point where, quite literally, your money is no good there, because you don’t have the right type of currency anymore. Other times, you have too much money, and can’t find enough quality merchandise to spend it on. We’ll take a closer look at some examples of these and other monetary anomalies in this month’s WTC, and question just what the crap is going on in these games with their money systems.

Long before Tony Hawk’s Pro Underground Skater Beach Volleyball THUG Life DJ Master vs. RAW Extreme 3D Part 2: The Revenge, the original Skate or Die graced our 8-bit minds. Skate or Die 2: The Search for Double Trouble changed up the Olympic events-style gameplay from the first iteration, and then Ski or Die introduced a half-pipe stunt area and a sideskating adventure mode.

In The Search for Double Trouble you start off with a paintball gun, a pretty basic skateboard, and little-to-no mad skillz. Your character accidentally runs over the mayor’s dog and you must now fight for your life. Who amongst us hasn’t been in that situation? You’ll need to acquire some new weapons, skills, and boards. As a street-smart punk skater, you don’t deal with the fascist currency implemented by The Man. Instead, you deal in the four crucial components of a kid from 1990: tacos, CDs, tapes, and fries. 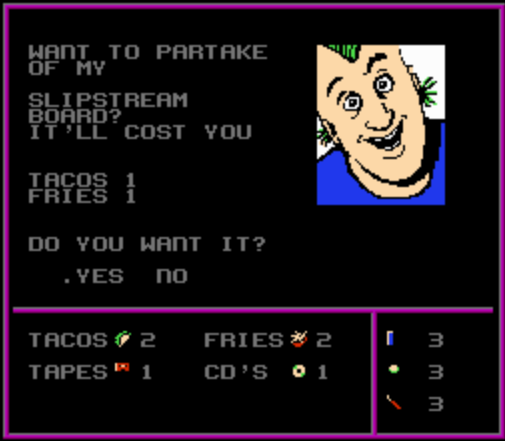 But don’t worry, you’ll find plenty of tacos just lying around the streets, blinking to get your attention. I love living in a world where you can trade some dirty fast food you found in the gutter for a faster ride. Not to mention there’s plenty of paintball ammo clips, eggs, and M-80s you can use to kill your foes. I guess they’re choosing to Die and not Skate, eh?

Still, what the crap’s going on in the town of Elwood that skewed the economy in such a fashion? Perhaps winners don’t do drugs, but this town seems to be filled with losers. The money icons are somewhat legible without the text, but I like how you’re supposed to assume that a blue rectangle represents a paintball cartridge, and a yellow circle is a (rotten?) egg. Unfortunately, you can’t go to the bank in this game and exchange tacos for tapes. Right now on Amazon, I’m seeing skateboards for $30 and up, so I’m guessing this takes place in an alternate universe where “fourth mealing” doesn’t exist.

I choose to skate. Wow, what a long intro song.

My Kingdom for a Heart!

I got coaxed into playing Kingdom Hearts, and it wasn’t too bad, but what the crap is up with the money in that game? Or should I say “munny,” because that’s what it’s called. Is Square Enix trying to encourage poor spelling? Are they too lazy to come up with something more creative? From what I read on a Kingdom Hearts wiki, Kingdom Hearts 358/2 Days (yes, that is the actual name of the game) replaced munny with Heart Points. I’m guessing they were foolish enough to label it as “HP,” and as anyone who’s played a real RPG would know, that usually stands for “hit points.” Or, if you’re a car enthusiast, horse power. I’m fine with them going against the grain, but don’t use names that just confuse and perplex us. Gold, Gil, or GP would have been more than sufficient.

In later iterations of Mega Man, the blue bomber can pick up bolts to trade with his fellow computerized comrades in exchange for E, W, F, Z, and M tanks, as well as bird seed for Beat. That’s like walking into a 7-11 and buying a Slurpee with bones, hair and skin you picked up from someone you just shot. Won’t someone please think of the (robotic) children?

I always feel weird when game sequels add shops. It just seems unnatural for the adventure and quest-line. If you’ve played a lot of Metal Gear Solids and concluded with MGS4, you’ll know what I’m talking about. You lose the allure of being a scavenger if you can just buy your gear. What’s really strange with MGS4 is that the arms dealer, Drebin, has his own exclusive currency, Drebin Points. He somehow follows you around the world without much explanation. I often thought that he was some kind of spy or traitor. Frankly, I don’t remember, but an omnipresent merchant really ought to be explained more, methinks. Did I mention that finishing this article will cost you three Mark Freedman Shekels?

Speaking of shekels, check out Mr. Ridgaway’s review of the latest Charles Barkley Saga installment. This game uses Neo Shekels as currency and the Star of David as the currency indicator. It’s completely arbitrary and unexplained, just like the other examples I mentioned, but at least this one is hilarious :).

Mega 64 pokes fun at the screwball shopkeep from Resident Evil 4.

I know I talk about RPGs a lot, but let’s take a general look at enemy fights. How does Gold, Gil, Munny, Neo Shekels, or whatever fall out of the enemies when they die? Where does it all come from? Are their veins filled with these precious metals? I’m no scientician, but that gold poison might explain why they’re all trying to kill you. Imagine if this happened real life? Baltimore’s crime rate would be through the roof. Oh wait…

You, You Got What I Need.

Sometimes it’s not the money, but what they’re selling that doesn’t make sense. Robo, everyone’s favorite reprogrammed robot meant to destroy all humans, was a favored addition to the Chrono Trigger team. When you find yourself in 65-million BC, not only do the cavemen deal in Gold, but they also sell a weapon specially designed for your new robot friend. It’s called the “Stone Arm,” but simply explaining that it makes sense because it’s made out of stone doesn’t work. It’s still fitted for a robot, after all. Does Wal-Mart sell items that someone from the year 65-million AD could use as weapons? Only time will tell…and I, for one, hope the answer is “yes.”

In conclusion…well, I’m not really sure what advice to give you. I guess just hold on to your money and spend it wisely, even if it doesn’t look like money, read like money, or consist of the body parts of your fallen brethren. There’s only one game that I can think of where the money is actually pretty legitimate. Invest wisely, my friends.

Actually, I think I'll go out on a limb and say that this whole game is a highlight.