Throughout all entertainment mediums, one fact is universally true—there sure is a lot of crap out there. H.L. Mencken once famously said:

“Nobody ever went broke underestimating the intelligence of the American public.”

The fact that Michael Bay movies are continually global blockbuster hits proves that this is true all over the world. Film and television live and die by this motto, and videogames are no different. Games that copy well-worn formulas are much more likely to be released than ones that try something new and clever, no matter how fun they might be, because publishers don’t like taking too many risks. Largely because of this, so many bad games get released that we’re barely even surprised by them anymore.

But our tolerance has its limits. Some games go beyond being a bit trite or a bit lazy, offering an experience so poorly crafted and terrible that you’re offended that such an abomination could even exist. The kinds of games that are just so loathsome they invade your subconscious thoughts until you find you’re sitting at work thinking of nothing but how sick it makes you that there could be somebody out there who actually enjoys and pays money for such terrible things, contributing to the offending developer and causing the cycle to repeat itself, and that this person is allowed to continue living each wretched day of their life without being publicly crucified with white-hot rivets in front of their weeping mother while you look on and just laugh at them as they breathe their last breath. Hahahahhahaha…

…or maybe that’s just me.

Regardless, here’s a bunch of games that are awful. Just awful. 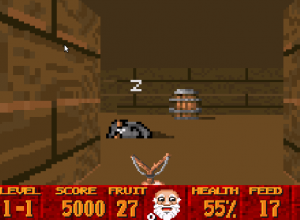 Where do I begin? For starters, Super Noah’s Ark 3D is a blatant rip-off of Wolfenstein 3D, reportedly even down to the SNES version’s code. This wouldn’t be terrible except that, yes, Wolfenstein 3D for the SNES was pretty bad, and somehow Wisdom Tree managed to make it even worse.

Scratch all the stuff about Nazis, killing, or anything interesting. Let’s replace all the soldiers with animals. And then we’ll replace your gun with a slingshot that fires tranquilizing pellets. Let’s also replace the somewhat colourful surroundings of German prisons with the inside of an ark. That’s more suitable for this game, but now the environments are all red and brown. If I wanted to see a ton of red and brown, I’d eat at the Olive Garden.

But perhaps most importantly, this game is bad because it’s a Bible game. No Bible game has ever been awesome—aside from Bible Buffet, anyway, but that’s only because it was more focused on the buffet, and very few vegetables are religious. Ah, the bitter cold of wintertime. There’s not much to do outside, so you’re probably thinking about bundling up inside with a nice classic winter sports game. Can’t find your copy of NHL ’94? Well, pop Winter Games into your cartridge slot and get ready for a bumpy ride. No, I’m not talking about downhill moguls; I’m talking about the overall cesspool that is this game. The controls are basically nonexistent, whether you’re doing Hot Dog Ariels (whatever that is), speed skating, or figure skating. While its crappiness does have a certain charm to it, it amazes me how such a steaming pile has an official Nintendo Seal of Quality on the box. 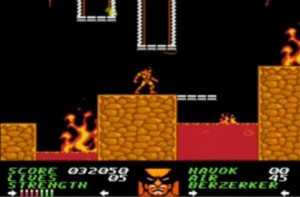 How did LJN get their hands on so many licenses? And how could they possibly ruin a game about Wolverine? There’s so much they could’ve exploited; so much badassery, a whole assortment of enemies to fight against. Hell—they could’ve copycatted any decent action sidescroller and called it a day. Instead, the whole game setup just yells “generic”.

You may not know everything about Wolverine, but the one thing we can all agree on is that he has claws, and he shreds enemies with them. But in this game, you won’t be using Wolverine’s claws all that much, since they are limited by a “berserk gauge”. Also, the claws aren’t very impressive; they’re only a few extra pixels attached to Wolverine’s fists. That’s lame! 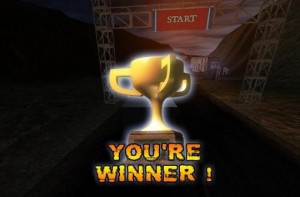 I honestly don’t understand how this game happened. I can’t fathom a scenario where it was looked upon by anyone in the company, and that person said, “Yes, we can release this now. It is finished.” I’ve downloaded viruses that have done less damage to my computer than this game. I am genuinely concerned about the people who playtested it; someone should go look for them. If they thought this game was adequate, I guarantee they are still trapped in whatever room the testing occurred in, as there is no possible way they can operate a doorknob.

This is theoretically a racing game, but it is the first racing game I played where the other driver seems to have abandoned his car, probably because he was too embarrassed to be featured in this steaming pile of fail. The other truck doesn’t move, and after growing tired of waiting for him to do something, I tried to push his car along only to find out that I’VE BEEN DEAD THE WHOLE TIME AND PILOTING A DAMN GHOST TRUCK because I went right through him. Either that, or the game didn’t bother to include any collision detection, as you can drive through anything and the game doesn’t seem to have any problem with that.

Big Rigs is less a game and more a practical joke on the gaming community—the equivalent of a company releasing a game that Rick Roll’d you when you tried to play it. I would call this game trash, but I feel like that is unfair to trash. So instead I will say that there is absolutely nothing good about this game at all and that the spouses of everyone who worked on this game now have legal grounds for having their marriages annulled. 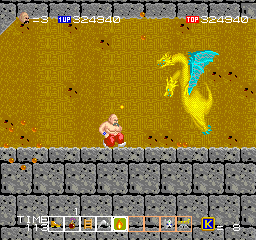 Karnov for the NES is an…OK game. Nothing special, but if I can finish it, there must be some merit to it. However, that game stems from an arcade version that will violate you mentally…and possibly sexually, if you play it the wrong way.

The biggest issue is the game’s difficulty: Boss battles often require you to avoid so many projectiles that you might as well be wearing a bulls-eye on your forehead. Enemies are also quite plentiful and have no problem killing you in one hit. But what’s worse is the timer: It’s practically impossible to beat the final level, not ONLY because of all the obstacles you need to overcome, but also because there just isn’t enough time to get to the final boss and defeat it.

Karnov is also filled with weird characters that really don’t make any sense being there. Where can you find dinosaurs living in the same region as a circus? Why are buff bodybuilders trying to slaughter you? Why are there half-centaur, half-caterpillar women in existence at ALL? Karnov is the only drug you will ever need. Plus, the ending sucks. It just sucks. Sucks! 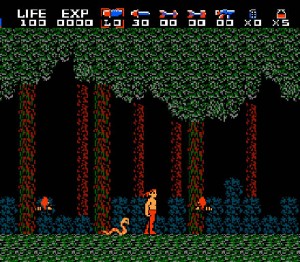 Whatever you do in this life, for the love of God, do not play Rambo for NES directly after completing Platoon for the Commodore 64. You will be more disappointed than Anne Frank was when she got a drum kit for Christmas. In all honesty, my memory is a bit hazy on this one, as I have not touched the game since 1990 (and even then I couldn’t bring myself to complete it), but from what I can Google-remember, it was just straight-up boring. All you do is kill animals, which, considering I refuse to even kick a chicken in Fable, only made me depressed. In the end I gave up because I kept getting lost in its terribly designed layout—and, like most 9-year-old girls, I just wanted to kill some humans, anyway. 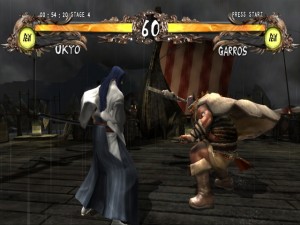 SNK Playmore? More like SNK should “play more” games! Every massive flaw in Samurai Shodown could have been avoided if the developers compared it to the games that they were up against at the time. Shodown Sen is one of those games that goes beyond so bad it’s funny into just completely awful. Destroy all copies on sight. 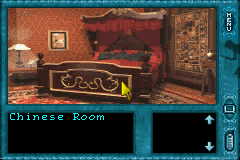 Nancy Drew: Message in a Haunted Mansion is a fairly good game. I like it a lot, and…wait, we’re talking about the GBA version? Ugh, forget it!

This is a great example of a bad port. Almost all the animation, voice acting, music and sound effects were cut out. Hope you like playing in complete silence! The graphics quality has taken a steep dive, and it’s impossible to figure out what to do unless you’ve played the original game. Perhaps worst of all, the GBA version retains the hideously difficult endgame challenge, which forces you to remember twelve different Chinese symbols and put them in the proper order.

The most positive thing that anyone has ever said about this game is, “The loading times aren’t that bad.”

You can't handle the games!