Pehhhh, kids these days and their 3D consoles and TVs. In my day, if I wanted 3D action, I popped in 3-D WorldRunner or Rad Racer, strapped on my 3D glasses, and squeezed that black Tic Tac labeled “SELECT.” Doing so split the image on the TV and your very own way of thinking. Sitting in your 3D living room, looking at your 2D Cathode-Ray-Tube, the image would appear in 3D through your red-cyan glasses!

Ah, the technology was just incredible, but you’ve probably all but forgotten about this old classic, right? Well, it shouldn’t be that hard to find in your collection, assuming you alphabetize your games and put numbers first. Just a fair warning—if you’re one of those crazy folks from the future who has fax machines in their living room, self-walking dogs, and dehydrated pizza, I would strongly suggest not playing this on your 3D TV. Since pressing SELECT adds another dimension, you could very well create a black hole in your living room, travel back in time, and your mother could have the hots for you. (She would say “the hots” because your mother is old, and she probably wasn’t such a square back in the day.) Try to imagine all life as you know it stopping instantaneously and every molecule in your body exploding at the speed of light. …Just don’t play it on a 3D TV, OK? 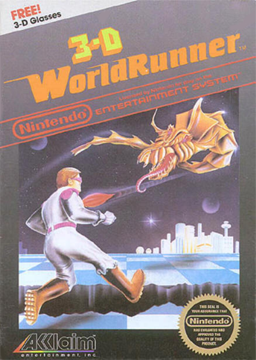 The game box is pretty striking, isn’t it? I used to dream about being the WorldRunner: a tall, thin, futuristic-looking dude with crazy spiked boots, Riddler-esque goggles, and a red flame coming out of my chest (or, perhaps, the tail flame of a rocket going in to my chest). After starting up the game, though, you realize your character is just an amorphous blob with a huge melon on top of his neck. My guess is that he was a designated runner from RBI Baseball. The differences between box art and in-game art aren’t as bad as Mega Man, but it will definitely make you do a double take, or, perhaps a triple take, once for each dimension. 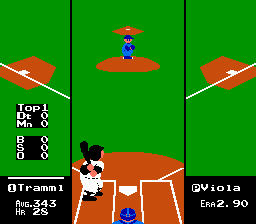 I can’t tell which is which!!

According to Wikipedia, 3-D WorldRunner is a third-person rail shooter. That would imply that you shoot things (and that Wikipedia is a reputable and objective source of information). OK, well, there are things to shoot, but you don’t always have your weapon; you must continuously run and jump out of the way of obstacles. Seriously, buddy, life moves pretty fast. You don’t stop and look around once in a while, you could miss it. (I don’t think the WorldRunner ever watched Ferris Bueller, or maybe his idea of “stopping and looking” is “slowing down to a brisk jog.”) You never see the WorldRunner’s face, but I always imagine it’s a woeful look of “Oh god, why did I take this job. Sure, the benefits are great…unlimited fruit juice, anti-grav boots—but there’s no vacation time unless I get myself killed!” The WorldRunner definitely has the workaholic motto “I’ll relax when I’m dead” poster in his office.

WorldRunner took a lot from the Mario (pronounced Mare-ee-o) series. As you run forward, your main character needs to collect power-ups. These are conveniently located in these long green shafts doted around the landscape that I like to call long green shafts, or LGSs. You’re probably used to jumping on top of green pipes in Mario; here, you can use the LGSs as springboards. The real power in LGSs here, though, is when you just crash into them with your head, running at full speed. Out pops one of a few possible things from Bizzaro Mushroom Kingdom. The first is a rocket ship that looks a lot like the rocket ship in Mario 2. This guy gives you the ability to shoot fireballs. Next, a beaker of red fruit juice gives you an extra hit, but doesn’t seem to open up a door to subcon. Finally, the spotted mushroom which, when touched, instantly kills you. Far worse than the Lost Levels poison mushroom, which does a damage point, this bastard is a fungal cyanide pill. Oh, and let’s not forget about the invincibility item, which looks just like Samus’ Varia suit power-up. 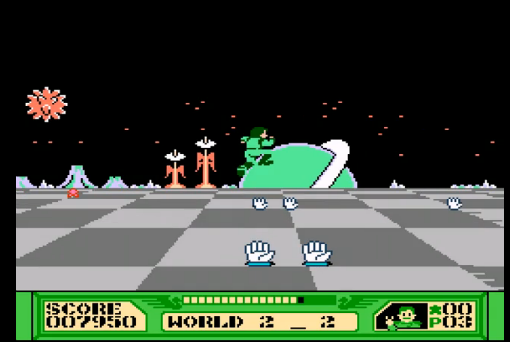 Hands block the path to Uranus.

Once things get tough, you’ll be jumping over large pits where you have to perfectly time jumping on springboards or long fire shafts (LFSs). Yeah, apparently you can’t run into an LFS, but you can jump on top of it.

WorldRunner’s actually quite long and challenging for an NES game, and a nice mix of different genres. Once you get to the end of each world, you’ll be in a 3D space fighting a disjointed serpent. You’ll also face these annoying hands that try to stop you in your path, and you’ll have to scroll left and right or jump over them to get through. All those “talk to the hand” yokels from the late 1990s must have gotten their saying from this game. Every once in a while, even in 2012, you’ll hear someone’s grandma saying this like she’s with the “in crowd.” Sorry grandma, you’re about 20 years too late, but thanks for playing that copy of 3-D WorldRunner that you picked up at a yard sale for 50 cents. 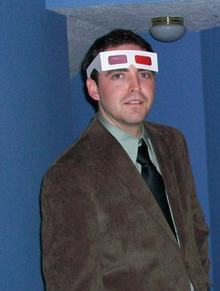 If you own this game like me, you probably lost the original glasses. Copies on eBay with the glasses are quite rare. Just build your own, like this guy!

The sprites and backgrounds are well done for their time. The music is pretty quirky, albeit repetitive. It’s hard to imagine it was done by Nobuo Uematsu, the same cat who brought you all that great Final Fantasy music. Do people still say “cat”?

It’s always fun to take a walk down memory lane and still be greatly challenged. It’s also interesting to look at how obscure and unadopted augmented 3D technology was in the 80s. Looking 25 years ahead, we’re still basically at the same place, minus trendy, colorized glasses. 3-D WorldRunner is better than most of the garbage you’ll find in the NES library, so why not check it out?

PUT DOWN THE CHEESEBURGER AND BUY EVERYTHING IN THE TELLTALE GAMES STORE. From June 6 to June 30, Telltale Games will be demonstrating once again why we love them so much by making it affordable to bu