I cannot think of much to say about this game. The only reason I chose to review this below-mediocre poorly developed rhythm game is because it should have been withdrawn from shelves a very long time ago. Konami dropped the ball hard this time, leaving swears inside the game. Yes, it’s an oversight, but if the game is rated Pegi 3 then it should not contain two instances of the word fuck.

The offending song is “The Fear” by British musician Lily Allen. She’s actually pretty good to listen to, but to play in a rhythm game? It is terrible even before the swears come in. This game is so bad it isn’t bunny.

So what do you get when you fire up Pop’n Music? A poor selection of masters and covers, all of songs you couldn’t care less about. Another version of “YMCA,” but, don’t we already have enough of those? They licensed “I Want You Back” by the Jackson 5, but had to go with a cover of “ABC” instead of a master version. How does that even make sense? You can license one and not the other?

Seemingly stranger choices include a song by Kasabian, and Motorhead’s recording “The Ace of Spades ’08.” I can’t stand it—where are the Konami songs? There’s only 10 or so; there should be more.. dd

Well, let’s talk about the controls. 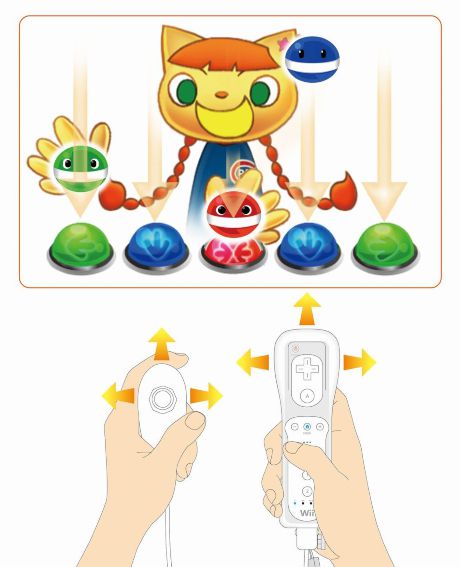 THEY DO NOT WORK

The goal of Pop’n Music is to move the Wii Remote and Nunchuk in the correct direction to hit the onscreen buttons. The problem being…the Nunchuk. This crap can barely be used for motion recognition. The level of accuracy you need just isn’t there. It was manageable in Samba De Amigo Wii because you could at least use two Wii Remotes instead of the Nunchuk. Samba is still playable despite its imperfections. Pop’n Music is neither adequate nor playable.

The on-screen character just ends up flailing their hands around.

In a shocking turn of events, Stop Drop’n Music contains a poor excuse for a multiplayer mode, meaning you can share the soul shatteringly mundane experience with the friends that you don’t have. 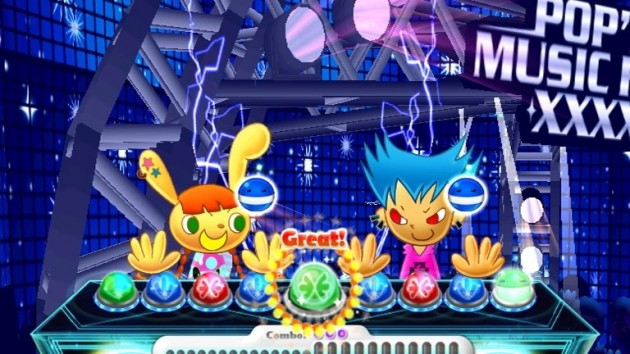 We can be pathetic… together! Bro-fist!

I feel really bad for picking on Konami. The company is continuing to tip-toe across a fine string of bad moves. Any bystanders watching them from afar are feeling sick and confused at the sight of it.

I paid about a fiver for this game. It is in good-as-new condition but I still feel I was ripped off. Why doesn’t Konami just release a good Pop’n Music game outside of Japan? They can recycle their old controllers; it’s what they’ve been doing for years with Dance Dance Revolution.

Look—don’t get this. Never consider getting this. Ignore it, please; just forget it exists. Why should this game get any respect from you when its developer didn’t show it any in return?

This review is based on the European version of the game. As far as I am aware, Lily Allen’s song does not appear in the North American version.

We have an extra-special treat for you folks, this month!